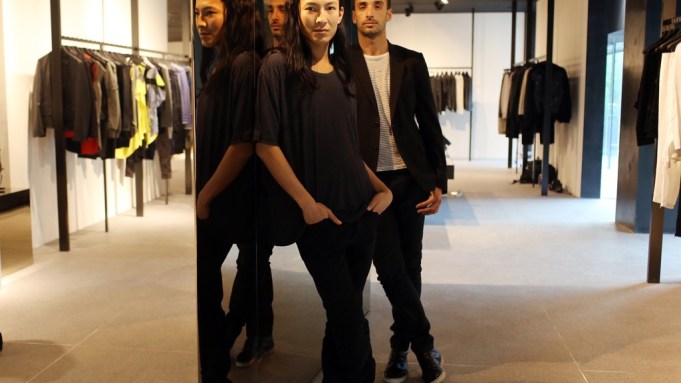 BEIJING — As a child, China was the last place Alexander Wang wanted to be.

Uprooted from his San Francisco home at the age of 12, when his Taiwanese-American mother moved to Shanghai, the budding fashion designer spent a year in China’s financial capital — and hated it, rejecting an exclusive private school there to return to boarding school in the U.S. the following year.

“I missed my friends and everything back home,” he recalled Friday in an interview here, perched on the fur-lined concrete sofa that is a centerpiece of his second flagship in the world.

“It didn’t look like this at all,” Wang said, gesturing toward the modern concrete-and-glass storefronts outside. “If there was something like this then, I might have changed my mind.

“It’s very surreal to see my name on a building in Beijing.”

Wang’s journey to the Chinese Mainland to open his flagship has felt like a homecoming of sorts for the New York-based designer. Wang, who speaks Mandarin, has traveled frequently over the years to Shanghai, where his mother still lives; his father is based in Hong Kong.

“My mom is so excited,” Wang said. “She was the first one who told me, back in the day, ‘One day China is going to be a fashion capital and you will be back here.’”

On Friday night he was, with a modest red-carpet event followed by a thumping underground parking lot party featuring DJ Diplo and rapper A$AP Rocky. Actress Zoe Kravitz — a friend of Wang’s — and her boyfriend, actor Penn Badgley, flew to Beijing to join him for the opening, along with a collection of Chinese models and stars.

“It’s amazing, this is where he’s from, it’s amazing that he is opening the store here now,” Kravitz said.

“He is so young,” said Sun Li, 29, the Chinese actress best known for her role in Jet Li’s “Fearless,” who made Wang’s opening her first major event since giving birth six months ago. She said a designer friend introduced her to the clothes two years ago. “They are very simple but very fashionable and very comfortable to wear,” she said, speaking in Mandarin after exchanging a few words with Wang during photos. “I think he is the most famous here among these young American designers.”

The brand has had limited exposure in China so far, carried by the Hong Kong-based Lane Crawford department store and multibrand boutique Shine in Beijing, and in the multibrand boutique Joyce in Shanghai. The designer and his team fly next to Hong Kong, where on Wednesday they have an event with a pop-up shop connected to the Joyce boutique in Kowloon’s Harbour City.

This year will see the opening of three shops on the Mainland — the flagship in Beijing and two others later this year in Shanghai. By the end of the year, there will be 14 locations across Asia, including shops-in-shop in Seoul, Bangkok and Singapore.

Key to Wang’s marketing strategy in China, as back home, is online presence. With both Facebook and Twitter blocked by Chinese censors, Wang has launched a Sina Weibo account — the leading Chinese Web portal — to draw in Chinese followers, and is expanding the company’s e-commerce reach to include a Mandarin-language site and shipping to Mainland China, Hong Kong and Japan.

“We are careful to do things organically, we do check how we perform, we check what the potential is to be,” said Rodrigo Bazan, president of Alexander Wang, who is managing the designer’s expansion while insisting that the brand build one shop at a time and not succumb to the lure of big profits by expanding too fast. “You have to take it very seriously, one step at a time.”

Clouding some of the excitement of this grand opening is the ongoing lawsuit in New York launched by a former employee, alleging sweatshop conditions in operations there. Wang’s animated face fell at the mention, and his people are tight-lipped. “There is nothing to say,” his spokeswoman said firmly.

Still, the young designer’s excitement over the 5,000-square-foot, two-floor Beijing flagship space is palpable. “We had so much more real estate here, so it really allowed us to experiment more than we did in New York,” Wang said.

Unlike the New York store, where the focus is on natural light and preserving some of the building’s heritage features, the Beijing store includes more experimentation in design and display. Working with architect and designer Joseph Dirand, they have emphasized marble and bronze, including a marble wall cut from one stone that the designer likens to a Rorschach inkblot test.

The New York fur-covered hammock has morphed into a goat-hair-covered cement sofa. Customers are greeted at the ground-floor entrance by a vintage black leather de Sede sofa flown in from California and a grand marble staircase leads shoppers from the entrance up to second-floor displays.

While Wang concedes he has “cherry-picked” from his collection for this market, there are no exclusive designs for his Asian clientele, and he pauses when asked if his heritage influences his design.

“I never really think about my design approach as something that’s really trapped down by my nationality or my background, and although we are an American brand, I think that is more to the sense of what is American sportswear, and things that feel very accessible and easy to wear,” he said. “But at the same time we really see our audience and our consumer as a global citizen, someone who isn’t defined by where they live or what kind of music they listen to, things like that. It’s a sensibility that is much more individual.”