Alexander Wang Gets to Work at Balenciaga

By Miles Socha and Jessica Iredale on December 4, 2012
View Slideshow 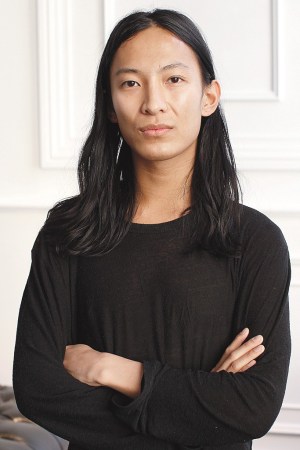 “‘Immediately,’ he said, ‘I want to see the archives. I want to understand the culture behind the brand,’” said Isabelle Guichot, chief executive officer of Balenciaga, which revealed Wang’s appointment on Monday, confirming a report in WWD on Friday. “He could have slept there almost.”

On Monday, Wang was busy shooting his pre-fall look books at a studio space in Williamsburg, Brooklyn, so chosen because it could accommodate his mirror and plywood staircase set. When asked about Balenciaga, Wang demurred, saying only, “We’re still figuring things out.”

The focus was on his own collection, which was built around the idea of “blurriness and mélange,” an antidote to last season’s precise, linear look. As usual he avoided color, working primarily in black, white and gray with a smattering of brown and “amaretto.” There were tailored jackets, vests and pants but the collection had a softer edge that was still quite sporty. Scarf dresses came in suede and sueded jersey, while other tops and dresses were inspired by athletes’ jerseys. Sweatshirts were also a big motif, in tweeds, intarsias and jacquard.

When a guest remarked that one might find a hint of Balenciaga in the egg-shaped line of one printed silk sweatshirt, Wang only smiled.

But his appreciation for, and curiosity about, Balenciaga’s heritage was among the qualities that helped him win the post at one of Paris’ most storied and — in recent years — directional houses.

An ability to project the brand into a new stage of development, bring additional modernity, and understand the “technical culture” and craftsmanship of the house were among other criteria Guichot weighed in finding a successor to Nicolas Ghesquière, who exited Balenciaga Friday after a 15-year tenure.

“We wanted someone with global thinking, a citizen of the world, and someone who could understand the digital world and the direction of fashion and retail tomorrow,” Guichot said in an exclusive interview. “It will be a new vision; a new understanding of the brand. The heritage of Balenciaga is so big. Just a part of it has been exploited, but obviously not all of it.”

The Spanish-born couturier Cristóbal Balenciaga, who founded his house in 1919 and designed until his retirement in 1968, was known for such innovations as the cocoon coat, the balloon skirt and the asymmetric flamenco evening gown.

Wang is expected to immediately begin work on Balenciaga’s fall 2013 women’s collection, although Guichot said the format in which it might be unveiled during Paris Fashion Week, scheduled for Feb. 26 to March 3, has yet to be decided.

Under Ghesquière, Balenciaga became known for its exhilarating, exclusive and brisk fashion shows, often staged at its compact showrooms on the Rue Cassette.

“I don’t want to put [Wang] under unnecessary pressure, so we will have to figure how we want to present. We will figure out together the pace of next year,” Guichot said, noting that the pre-fall women’s collection is already finished and the fall men’s collection is also nearing completion. “It’s an important transition for the brand.”

Wang said, “I am deeply honored to embark on this new role for a brand and house that I have such great admiration and respect for.”

The 28-year-old walks into a house defined by Ghesquière, from the collection’s architecture — couture-caliber runway pieces, and capsules for silk, pants, archival styles and other categories — to a futuristic and otherworldly retail concept.

Guichot said it was “too soon” to talk about whether there might be any changes in either regard. “[Wang] will bring his own language and vocabulary,” she said.

She stressed that the brand’s luxury positioning and exclusive aura, which dates back to the founder’s penchant for mystery, would not change.

Nor will the company’s pace of expansion, which is to add between 10 and 15 units a year, Guichot noted.
Balenciaga will end the year with about 65 directly operated stores, corners and shop-in-shops, with boutiques in Rome and Ala Moana, Hawaii, among the recent additions.

Important openings for 2013 include a unit on Mercer Street in New York City, considered critical since Balenciaga’s flagship on West 22nd Street was destroyed by the storm surge brought by Hurricane Sandy. Guichot noted a temporary location on Wooster Street in SoHo is slated to open in mid-December.

She allowed that Wang’s “transversal” approach to design — with a keen interest in not only ready-to-wear, but accessories as well — was another feather in his cap. “He had that global vision very early in his development,” she said, characterizing his approach as “creative realism.”

One of New York’s buzziest young talents, Wang established his label in 2005 and has rapidly built a global following for his edgy T-shirts, studded handbags and sleek-and-modern designer clothes for women and men.

Born to Taiwanese-American parents and raised in San Francisco, Wang studied fashion at Parsons School of Design at age 18. The Council of Fashion Designers of America recognized him with the Swarovski Award for Womenswear in 2009, and he scooped up prizes for accessories in 2010 and 2011.

Wang quickly expanded his product universe to include men’s wear, leather goods, a second line called T by Alexander Wang, and home objects such as ashtrays and coasters.

He operates a flagship in New York’s SoHo, and earlier this year opened a 5,000-square-foot unit in Beijing. The firm will end 2012 with a retail network of 12 freestanding stores and shops-in-shop in seven countries, with a concentration in Asia.

Guichot acknowledged Wang’s considerable responsibilities with his signature label. But she lauded the designer as being a “team player” and said creative logistics would be organized so that he can work on Balenciaga in New York and Paris, as he shuttles between the two fashion capitals.

“Designers are now nomadic people; He will be one of those nomads,” she said.

A driven yet fun-loving executive who joined Balenciaga in 2007, Guichot has piloted the company through a rapid growth phase during which it accrued critical mass in retail, which now accounts for more than half of its revenues.

The brand still has wide swaths of geography in Europe to cover, with no directly operated stores yet in Germany, Switzerland and Spain. Guichot has also cited men’s wear, footwear, jewelry and eyewear among categories ripe for expansion.

Parent of Gucci, Bottega Veneta and Puma, PPR does not break out figures for its other luxury brands, which include Balenciaga alongside Stella McCartney, Boucheron, Alexander McQueen and Sergio Rossi, among others.

In the third quarter, the division posted sales growth of 45.6 percent, with all brands and regions contributing to the performance. In comparable terms, sales were up 15.5 percent.

Guichot said Balenciaga continues at its double-digit pace and — armed with an energetic new creative director — “the potential is there.

“We want Alexander to help us sustain the momentum, but also it will bring a new vision, a new understanding of the brand,” she said.

“Wang will use his creativity and his own research to reinterpret and immortalize the distinctive, modern and extremely innovative style imposed by Cristóbal Balenciaga,” he added.

Over the weekend, he expanded online selling — in partnership with Italy’s Yoox Group, coincidentally a joint venture partner with PPR — to Europe. The move adds 23 countries including France, the U.K., Italy, Germany, Spain, Benelux, Scandinavia and Eastern European markets.

The offering includes Wang’s second collection of objects, which ranges from a domino set to inflatable pool toys, all in black.

“We will now be shipping to more than 50 countries worldwide,” said Rodrigo Bazan, president of Alexander Wang. Previously, the e-commerce site, launched in May, shipped mainly to the U.S. and Asia.

Wang sells his collections to more than 200 stores in Europe across all categories, he noted. The U.S. is still Wang’s largest single market, but Europe and Asia make up about 60 percent of its total distribution.

In the first half of 2013, Wang plans to update his Web site and online store in terms of design, photography, content and usability.

“And as we put energies toward worldwide e-commerce, it will convert into our largest retail sales channel,” Bazan noted.