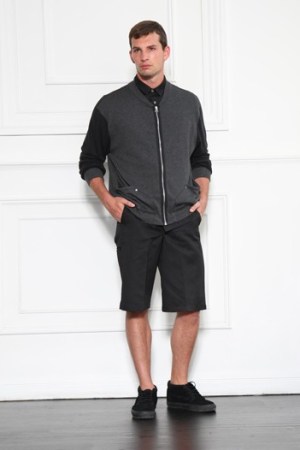 This story first appeared in the July 24, 2009 issue of WWD. Subscribe Today.

“Men’s was a long time in the making,” said the 25-year-old designer, who is known for edgy, downtown-chic women’s wear. When he started his business with cashmere knitwear five years ago, he wanted it to be unisex but it really caught on with women. Wang won the CFDA’s Swarovski Award for Womenswear this year.

As his business expands and the brand begins to encompass a lifestyle, the time has come to identify the Alexander Wang man. And although his women’s wear often has a tomboy element, don’t expect gender bending when it comes to men’s. There is not a stitch of flamboyant fashion in the line.

“I have a different motive for launching men’s. Women’s is more about a fantasy and indulgence. But I think guys look most sexy in a T-shirt and jeans,” he said.

Therefore it made sense to do men’s under the T label that launched last season. T is sometimes called a diffusion line because of its relatively accessible prices, but is not merchandised as such. It simply fills the need for jersey basics in the wardrobe.

“The whole idea is T-shirt dressing, the ideal basics that you throw on and you layer. It’s very much about functionality and ease,” he said.

Many of the pieces are athletic-inspired, such as muscle tanks, sweatshirts and hoodies. Distinctive details include his signature yokes, pockets pieced to suggest a capital A, and two bits of hardware at the nape of the neck, which resemble a bar piercing. And all of the fabrics were custom developed.

“I wanted the cotton jersey to be soft but still dry. I feel like most T-shirts are either too stiff and dry or too slinky and slimy. So we developed this balance,” he said.

“It’s a guy who doesn’t think he’s fashionable, but is just cool and has taste and style. That’s much more appealing than a guy who’s fighting his girlfriend for the mirror. And a lot of brands that have both men’s and women’s are about matchy-matchy style, but for me it’s not like that. There’s a similar sensibility, but opposites attract,” Wang said.

Armstrong shot model Vincent LaCrocq moving around an urban athletic court. A behind-the-scenes film will air on alexanderwang.com on Aug. 1 to mark the launch of e-commerce.