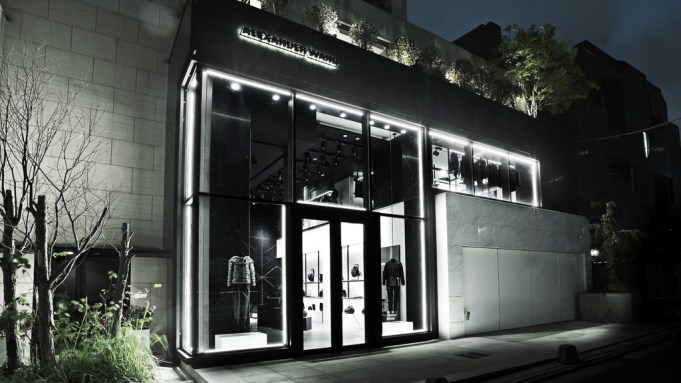 TOKYO — Alexander Wang has just opened its first flagship here as the brand slows its rapid expansion efforts in favor of growing sales through its existing store network.

Alexander Wang president Rodrigo Bazan said he is happy with the company’s performance and sales growth but he is also cautious not to overexpose the brand and open too many stores too quickly. He declined to disclose sales figures but said the fashion firm is trading in line with expectations.

“We could be growing more if we decided to open more distribution,” he said of the business, which counts 16 stores globally. Of that total, 12 opened last year. Club 21 is the brand’s retail partner for Japan, as well as Singapore, Thailand and Malaysia.

The new 5,120-square-foot store in the trendy Aoyama district, which makes its home on a strip featuring newly opened Acne and Thom Browne flagships, is the brand’s first unit spanning three floors. Its ample size has given the company plenty of space for interiors featuring a mix of raw concrete, white Carrara marble and black Nero Marquina from China, polished bronze accents and floating shelving units.

The new store, which opened to the public on Saturday, dedicates a sizable section of the basement level to men’s apparel and accessories. Handbags and women’s wear occupy the ground and second floors, respectively. A zippered backpack featuring rose gold hardware is exclusive to the store, retailing for 136,500 yen, or $1,400 at current exchange.

Over the past two years, the brand has opened five shops-in-shop in Japan and the business is doing “extremely well” in the country, Bazan said, attributing the growth to a combination of its fashion-forward customer base and the brand’s competitive pricing and product assortment, particularly in accessories.

“It’s been a market that from the departure hasn’t had a distinction so much between European designers and new designers,” Bazan said, adding that the Aoyama store is “the perfect complement to the shop-in-shop business we have.”

Wang, who did not travel to Tokyo for the store opening, said he loves the Japanese capital and its people’s innovative approach to fashion.

“Tokyo’s Aoyama district feels like the right place to introduce our new retail concept. The Aoyama store gives us the space to house the largest men’s ready-to-wear and T by Alexander Wang collections in Japan,” the designer said.

Elsewhere in Asia, Bazan said the company is “fairly happy” with the performance of its Beijing flagship in the Sanlitun Village retail complex, which opened last year. The brand also has two stores in Shanghai that are performing “well” and in line with expectations.

The executive stressed that it’s still early days for the brand in China, a market that is rapidly evolving in terms of its taste level. Like in other markets, Wang is focusing on growing its business through its existing stores rather than rushing to open more units. Bazan said he senses that malls in China are requiring longer periods to really “warm-up” and attract customers.

“A new mall will take more time to get busier and busier and that’s across every single brand,” he said.