At age 31 Wang has built an ultracool brand synonymous with street grit, irreverence, the spirit of youth and spontaneity. 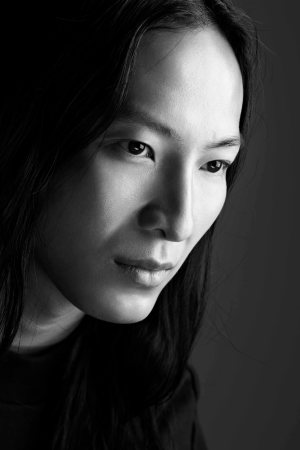 At age 31 he has built an ultracool brand synonymous with street grit, irreverence, the spirit of youth and spontaneity. He backs up his fun-loving image with a serious and ambitious business operation that has intrigued titans of luxury, such as François-Henri Pinault, and fast-fashion retailers — H&M — alike.

In the 10 years since the 31-year-old launched his label, Wang has grown it from six unisex cashmere intarsia sweaters to a $100 million bonafide brand with 700 distribution channels and 23 freestanding stores worldwide. Additionally, in 2012 he was appointed creative director of no less hallowed a house than Balenciaga, which he’s steered to double-digit growth.

There are a lot of X factors in Wang’s success, instinct being one of them. By the company line, his trajectory has been an “organic” process, though nothing has been accidental. His business decisions are deeply considered. He is aware. Aware of the expectations of designers and brands today, aware of his relationships in fashion’s insular realm and aware of the consumer world outside of it.

On a rainy Monday at the Tribeca Grand Hotel, the dewy Palm Springs tan Wang picked up at Coachella and his messy ponytail belie the improbably shrewd businessman side of his persona. “When I started, fashion was much more elite and more exclusive,” he says. “Now, from the smallest brand to the biggest brand it’s all about, in my opinion, being inclusive. It’s very rare now to be able to be a designer and survive and say, ‘I only want to design this kind of product and I’m just going to stay like this.’” He is talking about compromise to some extent, adapting his vision to the needs of a market that is relentless in pace. “It’s always, ‘Okay, what do I have to do next?’”

In the beginning the next steps were only about doing what was necessary to stay in business until the following season. In 2005, when Wang was in stores with his sweaters, he wanted his own section and say over adjacencies, even though he had yet to produce the full collection that gives credence to such an audacious demand from a start-up. He was a quick study — by 2007 he’d launched his first full women’s line.

Working off his own success has always fueled Wang’s process. He has immense respect for Azzedine Alaïa, who operates purely on his own, very narrow creative terms. Would the Alaïa method interest Wang? “I don’t know because I feel like when I started I automatically had to think about the other components [of business] and it’s inspired me to work in such a different way,” he says. “It triggers me now.”

From the outset of the design process, Wang projects how the collection will look in-store. He also asks: Who’s going to buy it and why would they want to buy it from his label specifically? Point of view dictates everything. “Every single time we launch a product or do something via social or Instagram I always think, ‘What’s our positioning?’ In fashion, unless you have something individual to say, there’s no point. You’re just going to follow someone else,” he says.

To his credit, Wang has had a handle on his aesthetic since his early days, which were centered on the model-off-duty look of loose T-shirts and skinny jeans that now belongs more to his T by Alexander Wang line than his main collection as the latter’s street grit has become ever more polished.

Black is Wang’s favorite color. His aesthetic has ease, he says, not in the sense that everything is fluid but that the customer can easily integrate it into her wardrobe. Then there are his innovation and irony, which he gleefully commodifies in both his clothes and through other channels. The Objects collection, originally intended as a fun, value add for his own stores, has included neck pillows, yoga mats and lighters. Based on obsessive sneakerheads, the spring line featured the apparel equivalent of an Adidas Stan Smith, which is currently back in heavy rotation among the masses.

When conversation turns to future growth, the designers who have set the bar as megabrands come up: Michael Kors and Ralph Lauren. Wang considers Lauren an idol and is especially impressed that his brand is not pigeonholed by price. “He does luxury, but you can buy a Polo shirt at Costco,” he notes. Lauren has also come to epitomize American style. “I don’t think anyone else depicts that vision better than he can,” Wang says.

Conversely, Wang envies the business model at skate brand Supreme, which cultivates customer loyalty. “The people who buy Supreme are diehard. They camp out for days,” he says. Then there’s Apple, which has morphed from tech company to lifestyle behemoth. “They sell the dream to everyone,” he adds.

If the aforementioned brands represent an aspirational career model to some extent, they do not set the mold Wang necessarily wants to fill. “I want to create my own,” he says. “That’s the part that’s so exciting to me.”

So far Wang has crafted his vision on his own terms. The business is independent and family-run — for now. Eventually his big plans will require outside investment or financial partnership. At the moment he is not actively looking for a backer, but he’s met with people. “There’s definitely an openness,” he says. “Capital to open retail is definitely a very important part of the next phase for us, and supply chain and resources, IT — those things can be aided by having a partner.”

Being independent has afforded him freedom to mount successful projects that might not have passed through umpteen levels of bureaucratic approval: his spring 2014 T campaign with Chris Kattan as his “Saturday Night Live” character Mango, or his decision to follow his New York flagship with a freestanding store in Beijing in 2012 rather than an expected locale like Los Angeles. Wang chose China because there was a customer base there, but also because as a Chinese-American — he was raised in San Francisco — he felt strongly enough that the meaning overrode the risk. This summer the company will open a 6,500-square-foot flagship, its largest worldwide, on London’s Albemarle Street.

If Wang is not taking on investors yet, he has a growth strategy. There are the usual boxes to check — sunglasses, fragrance and possibly ath-leisure in light of the wild success of his performance wear-driven collaboration with H&M last fall — though there’s nothing concrete right now. The next order of business is less sexy: infrastructure, retail, human resources and aligning the efforts of his three offices in New York, Paris and Hong Kong with more than 200 employees.

When Wang opened the Paris office last year, the company’s market share shifted to 60 percent European, 40 percent domestic. “Europe has been the biggest growth market for us in the last two years,” he says.

Then there’s the matter of his other full-time job at Balenciaga. If the two brands were worlds apart when Wang joined the Kering-owned label, they now orbit around him and the pull of influence is obvious across the board. Working for a luxury conglomerate was a shift for him. “Number one, I’m an employee,” Wang says. “I’m there to do a job, to facilitate. I don’t make the final call.” It was an adjustment he’d prepared himself for, having been his own boss since he dropped out of The New School’s Parsons School of Design.

Balenciaga has also placed him amid rich and well-established resources. The ateliers can take his ideas and run, likewise the sales and merchandising teams. Also pertinent is his role in a group that umbrellas multiple brands with star designers. “Sometimes you do want to know how we’re doing compared to other brands,” Wang says. “What are they selling that we can’t sell? What are we selling that they aren’t?”

Assuming the design helm as a young American with a contemporary background was a big handicap initially, Wang recalls, and he had his share of naysayers. “It wasn’t like, oh I wanted to join Kering,” he says. “I wanted to see how I would take on the challenge and design something different.”

The French house has allowed Wang to tap into another part of his creativity. It’s also changed many people’s opinions of him — for better and worse. “It’s definitely built a lot of equity in who I am personally,” he says. “Not necessarily how people viewed my brand but maybe how they view me as a designer.”

That’s not to say Alexander Wang now shares adjacencies with Balenciaga in department stores, but the collections have evolved toward each other to some degree. “It’s also aggravated a lot of people,” says Wang, noting that some in the fashion press, in particular, haven’t taken kindly to his aesthetic branch out.

Now there’s no going back. Even if Wang doesn’t see himself designing for two houses forever, he is currently enjoying the rhythm and momentum. And surely working at the apex of French fashion has impacted the direction of his own brand and where he wants to push it.

In contemplating his future, Wang thinks a lot about the L word: “What does luxury represent to me? It represents status. It represents exclusivity. It represents craftsmanship, etc. There are obviously certain things I feel like I connect to, but at the same time the idea of pretension as something that I don’t associate with. I think I can extract certain elements of what it means to be a high-level designer luxury brand and deliver it on a different type of platform that I’m excited by.”