The women’s store opens Nov. 22 on Mercer Street in SoHo, while the brand’s first dedicated men’s store in the U.S. will open a few days later. 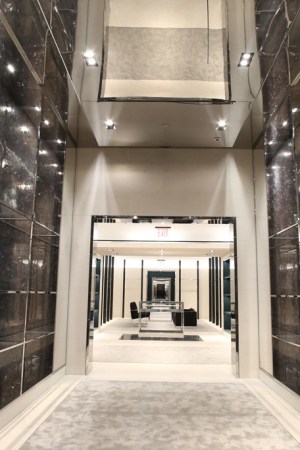 Before he even had a chance to think about his first collection for Balenciaga, Alexander Wang had to deal with the label’s new New York flagship. The company had signed a lease in SoHo in 2011 with plans to close its West 22nd Street flagship once that lease expired. Things got complicated when Hurricane Sandy left the Chelsea store inoperable barely a week before Nicolas Ghesquière exited the company in November 2012. But the turn of events created a blank slate for incoming Wang and his retail vision for Balenciaga, which is now ready to be unveiled.

The women’s store opens Nov. 22 at 148 Mercer Street, while the brand’s first dedicated men’s store in the U.S. will open directly across the street, at number 149, on the same day. It’s a critical move for Wang at Balenciaga, as the store is perhaps a more complete expression of his aesthetic direction for the house than he’s been able to express deliver in the two collections under his belt.

“One of the main things I wanted to convey was a sense of permanence,” said Wang. “I want people to walk into the store and feel like it has been there forever.”

Nothing says staying power like marble by the ton. Wang and Ryan Korban, a longtime friend who codesigned the store, built out the three-story, 4,120-square-foot space with deep green Verde Ramegiatto marble on the walls and staircase, combining it with limestone tiles and chrome for a floor pattern inspired by Cristóbal Balenciaga’s original salon at 10 Avenue George V, now the house’s Paris flagship. The rich shade is consistent throughout the store, from the suede accessories displays on the street-level, through accents the lower level.

The store is designed to feel more intimate the further one goes into it, so as it narrows toward the back, the shoe salon is lined in carpet with cracked resin walls that have an organic feel. The use of the color green, the marble motif and the nubby embroidered fabric used to upholster the furniture all tie back to Wang’s first collection for Balenciaga, which is no coincidence.

“The marble in the store came before the first collection,” said Wang. “The retail concept was the first initial project that just had to get under way. We jumped right in and started working on that and then the green was a key color in the first collection along with the marble green motif. The store concept triggered it.”

Wang said green came to mind as an aristocratic color that felt appropriate for a house with such history. Indeed, the vast quantities of Verde Ramegiatto have a stately effect, especially when illuminated by the grand skylight, which forms the store’s curving spine, connecting the ceiling to basement. Some might see its arc as a subtle reference to the curves of Cristóbal Balenciaga’s famous volumes. Done in glass with a geometric metal trellis, the skylight casts a soft glow — a combination of natural light and LED light boxes suspended from the ceiling — to contrast the interior’s hard materials. The skylight was inspired by several museums but The Metropolitan Museum of Art in particular, “in the hall where all the statues are and there’s this area where everything is displayed on stone platforms,” said Wang.

By drawing on museums and the classic style of Cristóbal Balenciaga’s French headquarters, Wang sought to impart modern sense of history on the store.

“Balenciaga is such an institution that I felt that it needed to have that same energy and that same emotion going into this location,” said Wang of the look, which, it stands to note, could not be more different from the world of his predecessor. Ghesquière was obsessed with all things futuristic. The words “Space Age” and “intergalactic” were often used to describe the stores he designed with Dominique Gonzalez-Foerster. The London space was outfitted with white padded cabins for fitting rooms; in Milan, there were satellitelike shelves.

While there aren’t plans for an immediate global overhaul of Balenciaga’s retail stores — new U.S. openings are in the works, but all to be determined — it seems Ghesquière’s futurism will soon become a thing of the past.

“The opening of the Balenciaga New York women’s flagship and the first dedicated men’s boutique in the Americas signals the way forward for the house,” said Balenciaga chief executive officer Isabelle Guichot. “With our significant new foundation in SoHo, a globally renowned neighborhood for design and retail innovation, Balenciaga in the Americas is now poised on solid ground to confidently expand in 2014.”

For his part, Wang considers the New York store a “starting point.” Going forward, he wants to keep some design elements uniform across all stores while working within the parameters of the local culture.

The designer is familiar with SoHo’s retail landscape. His first store for his own brand — now one of more than 15 worldwide — is just a few blocks from Balenciaga on Grand Street, where it opened in 2011 and was also designed with Korban. It too is decked out in marble and stone, yet Wang said deriving a different sensibility wasn’t a problem for him and Korban.

“When I’m in Paris at Balenciaga or in the offices in Chelsea, I switch into a completely different mind-set,” he said. “At Wang, there’s more of this ease and more of a chill-out vibe. There’s a living room when you walk into the store. At Balenciaga, it definitely has moments like that but I really wanted to work with the most amazing materials. It’s the ultimate luxury.”