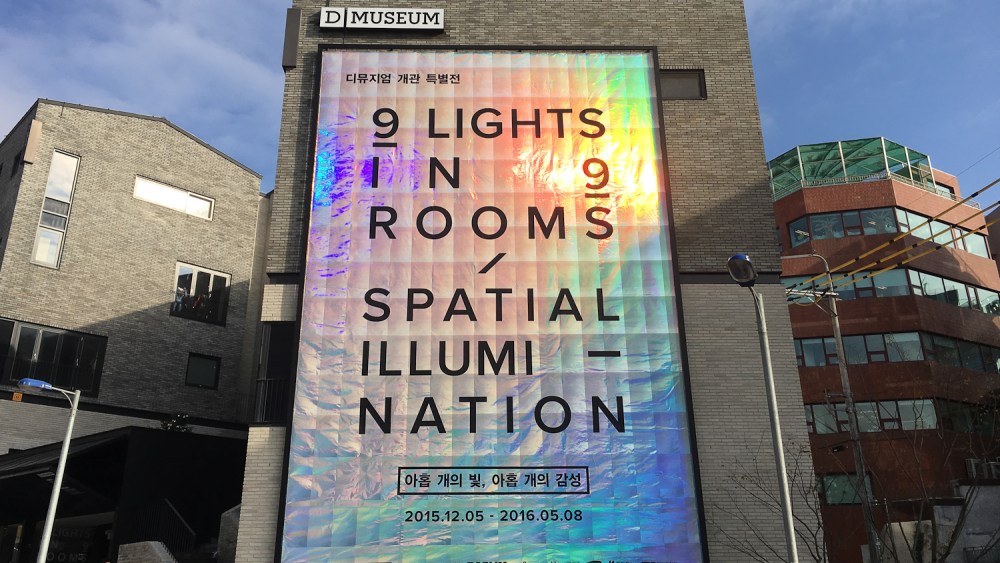 SEOUL — Holiday festivities only made up a portion of the lights hung up in Seoul recently as a group of lighting and design artists from around the world were flown in to launch an exhibition at the city’s new D Museum in the hipster neighborhood of Hannam-dong.

The exhibition’s pre-opening event took place at the newly opened museum, a branch of Seoul’s Daelim Museum that features a stark-white exterior. Inside a series of interconnected rooms, artists remodeled the spaces into environments for each of their artworks.
One of the of the most riveting pieces was “Onion Skin” by Ratsi, originally produced in 2013 and showcased with new, updated video images. The viewer stands facing a vertical corner of two walls, as video lights and music are played over 15 minutes, giving the sense of movement even though the viewer is standing still. “[In ‘Onion Skin’] the room and the artwork together interact with space, as well as the public in an autonomous manner,” he said. “’Onion Skin’ plays with perspective, modules and space.”

Talbot, who is based in London, exhibited a new work, “Contour,” comprised of a glass mirror with several swivels of live lighting swirling through it. “It’s like a human fingerprint, [it’s an] abstracted fingerprint and it’s about personal identity,” he explained. “Your mirror invites you closer and you see your own reflection.…You see yourself in the light and also the light in yourself.”

“Mirror Branch” by Studio Roso, composed of Rolf Knudsen and Sophie Nielsen, was one of the few pieces where an organic ephemerality comes together. Thousands of tiny mirrors make up the leaves of a “tree” that casts a bright, lifelike reflection onto the walls of the room. “We created this first piece as a presentation of light in dust particles,” Knudsen explained. “We normally set these pieces in natural environments where the sun hits the piece.…[And] this is the first time we’ve exhibited in such a controlled [enclosed] space.”

Other highlights of the event included Carlos Cruz-Diez’s “Chromosaturation,” a series of walls and shapes upon which different chromatic light and colors are cast. The artwork, conceptualized in the Fifties, was only fully actualized in the past few years.

British lighting veteran Paul Cocksedge exhibited one of the largest artworks at the event with a piece titled “Bourrasque,” meaning “squall” in French. Hundreds of sheets of white reflective materials hang from the ceiling, shining bright in the dimness.

“When I was studying in my early 20s, I remember being very fascinated by this invisible energy which is electricity and not knowing much about it,” he said. “I decided to embark on a journey of experimentation to kind of try to understand it. And what happens is that light always followed me around in the work I was doing and it was so inspiring because you can’t control light.…There’s this love-hate relationship with the material.

“You can’t contain [light].…It feeds us, and I think that’s the biggest challenge for us,” he added.