All Change at Chloe: MacGibbon Tapped As Creative Director

A young, female designer is back in the driver's seat at Chloe. Hannah MacGibbon will succeed Paul Melim Andersson as creative director. 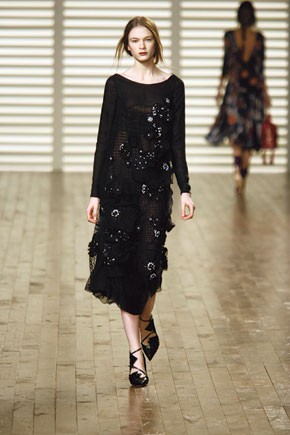 PARIS — A young, female designer is back in the driver’s seat at Chloé.

MacGibbon, 38, is expected to show her first collection for the house during Paris Fashion Week in October for the spring 2009 season. A striking, soft-spoken blonde with a penchant for breezy dresses and statement jewelry, MacGibbon worked under Philo from 2001 to 2006. Most recently, she consulted for Chloé as creative director of its new signature perfume, launched with licensing partner Coty Prestige and landing on counters last month.

“Hannah has been an integral part of our company for many years and we look forward to the overall creative vision she will bring to the growing world of Chloé,” Ralph Toledano, Chloé’s chairman and chief executive officer, said Monday.

He also thanked Melim Andersson for his contribution. “Paulo is a truly talented designer,” he said. “I am totally confident that he will have a very successful career.”

A Swedish national, Melim Andersson joined Chloé in October 2006 from Marni and showed three collections for the French house. He steered Chloé in an edgier, quirkier direction with offbeat colors and asymmetrical cutting, earning mixed reviews.

The chiffon tea dresses and mannish blazers he unveiled for fall earlier this month were seen as more in step with Chloé’s charming ingenue ethos.

But the brand also has seen its once-explosive momentum sputter, putting pressure on management to stem the slowdown. Sales at Chloé, part of Compagnie Financière Richemont, grew 9 percent in the three months ended Dec. 31. (The luxury firm is slated to issue a trading statement on 2007-08 sales late next month, followed by full results in May.)

Melim Andersson’s departure is yet another sign that fashion companies — facing stiff competition and a toughening economic climate — seem less willing to tolerate less-than-perfect casting for their design directors.

Last month, Gianfranco Ferré parted ways with Swede Lars Nilsson before he even presented his first collection on the Milan runway. And Vionnet has chewed through two designers, Sophia Kokosolaki and Marc Audibet, in less than a year on its bumpy road to rejuvenation. The revolving door also has been spinning at Emanuel Ungaro, Guy Laroche and Anne Klein, which shuttered its designer division after two seasons with Isabel Toledo.

Chloé has been one of the industry’s recent success stories, its sales more than doubling in 2005, fueled by Philo’s knack for creating coveted handbags, footwear and clothing. For Richemont’s 2006-07 fiscal year, Chloé was cited as a star performer, with sales rising more than 50 percent due to an expanded retail network.

Last year, Richemont executives announced plans to expand Chloé into watches and jewelry to capitalize on its strong brand recognition. Founded in 1953 by Gaby Aghion and Jacques Lenoir, Chloé was credited with inventing the category of luxury ready-to-wear and making youthful femininity the brand’s byword. Aghion worked with a rotating team of designers, some of them unknown, tapping Karl Lagerfeld as head designer in 1965.

Stella McCartney took up the reins in 1997, and was succeeded by Philo four years later when McCartney resigned to set up her own fashion house in a joint venture with Gucci Group. Chloé relied on its in-house design team while it conducted a worldwide search for Philo’s successor.

According to sources, MacGibbon declined when asked to be considered for the top job at Chloé in 2006, when Philo resigned to spend more time with her family and her new baby, Maya. Philo gave birth to a son in June. MacGibbon — like Philo, a graduate of London fashion school Central Saint Martins — worked as an assistant director to retired Roman couturier Valentino Garavani before joining Chloé.