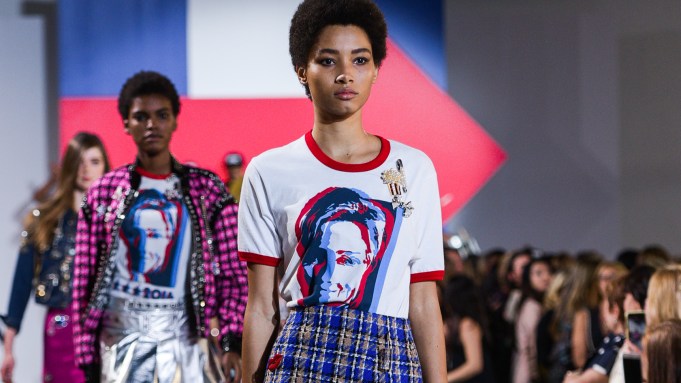 New York Fashion Week may be about to hit full gear, but the fashion flock had a more important cause on their minds Tuesday night: stumping for Democratic presidential candidate Hillary Clinton. Drummers, ballerinas and skateboarders were only the start of the night’s fashion show fund-raiser for Clinton’s presidential bid. Orchestrated by longtime Democratic supporter Anna Wintour — whose day job is Vogue editor in chief and Condé Nast artistic director — and hosted by Clinton’s right-hand woman Huma Abedin, the red, white and blue blowout featured a Chelsea Clinton fight talk, an all-star designer lineup and a Demi Lovato performance.

Bordering on an offshoot of “America’s Got Talent,” the Made for History collection almost took a backseat to the other attractions.

Some designer guests like Prabal Gurung, Dao-Yi Chow and Maxwell Osborne, and Marcus Wainwright each wore their respective T-shirt designs. And just to be sure the crowd of 300 or so knew exactly who designed what, those designers as well as others like Diane von Furstenberg, Joseph Altuzarra, Tory Burch, Thakoon Panichgul and Georgina Chapman each joined their respective model for a finale runway lap. Rather than the run-of-the-mill fashion show, the presidential-inspired designs were worn by professional dancers, marching-band-style drummers, and in Burch’s case, an array of families, including Carmelo Anthony and his wife Lala and son.

Marc Jacobs also pitched in on the Made for History collection, as did Jason Wu and others. Kors was there with his husband Lance just for the fun of it. Afterward, he said he hadn’t talked politics with Clinton, explaining he was there just to enjoy and support the cause. “I want those drummers at my show and I’m going to come out on a skateboard — not,” Kors said.

While not all of the designers have voting status, Gurung said he would be voting for Clinton. “Basically, I wanted to be here to support Hillary in what will soon be one of the most historic moments in our lives.”

Before the 30-minute-plus show, insiders like Harvey Weinstein, Gary Wassner and Hamilton South chatted at a private reception. The in-the-news and controversial Abedin – wearing a bright red skirt, Clinton T-shirt and metallic heels — greeted many warmly but she politely said she hadn’t planned on taking any questions and offered to find someone who would. That didn’t happen. But other handlers let their T-shirts do the talking with messages like “Love Trumps Hate” and “Madam President.”

Attendees were reminded six times — three times alone by Chelsea Clinton — to buy a shirt and they did not have far to go thanks to an on-site pop-up shop. The shirts cost $45 except for Jacobs’ limited-edition ones, which cost $60.