The New York Knicks star is collaborating with Rachel Roy on her secondary line, Rachel Rachel Roy, for fall. 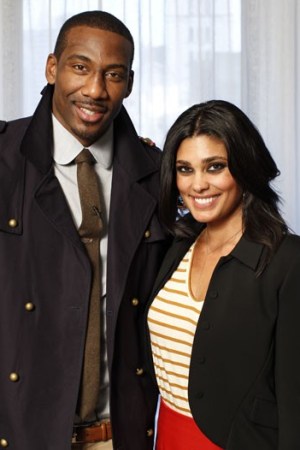 NEW YORK — Amar’e Stoudemire is running about 20 minutes late for a design meeting with Rachel Roy. The New York Knicks star is stuck at ESPN, looking to wrap up an interview before he puts on his other creative hat — that of design collaborator with Roy and her secondary Rachel Rachel Roy line for fall.

When Stoudemire finally walks through the glass doors of Roy’s Broadway offices, he looks dapper in his slim-fit attire. Few things would give away his basketball superstar status were it not for his 6-foot, 10-inch frame. Shortly after his arrival, that becomes a major focus when a couple of female executives of The Jones Group, which owns a 50 percent stake in Rachel Roy IP Co. and oversees the secondary line, angle to be photographed with Stoudemire, demonstratively kicking off their high heels to make a point of his height — or perhaps the lack of theirs — for the photo.

Thankfully for Roy, height isn’t an issue. In heels, the designer easily complements Stoudemire, and in the course of the meeting and photo shoot, it becomes clear the two have a natural chemistry. Stoudemire met the designer at the Four Seasons hotel in November at a brief meeting to discuss a potential collaboration, and, according to both, they hit it off from the get-go.

“We met, and we talked about starting something together,” Stoudemire recalled. “I knew about her but never met her before. I figured that teaming up with her would be the ideal thing for me to do, because she is so great at what she does. I honestly didn’t know what to expect, and when I finally met her and we talked about some fashion opportunities together, I could see she was very passionate about her work.”

Roy struck a similar note about her design counterpart. “To be honest, I was very unfamiliar with him,” she admitted. “Basketball is a field I knew nothing about. I had not been to basketball games probably since I was in college, but once I watched him play, I was completely and utterly impressed with his work ethic, by how much he encourages his teammates, and how much of a team player he is. After those initial meetings, we both decided we had a similar point of view and wanted to work together.”

Stoudemire’s fashion profile is clearly on the rise — especially since he joined the New York Knicks after eight years with the Phoenix Suns. In addition to sitting in the front row at Tommy Hilfiger the last two seasons, Stoudemire was invited by Anna Wintour to the Fashion’s Night Out runway show in September, and he just appeared in Vogue’s April issue.

Stoudemire said he had a knack for fashion practically since his Florida childhood.

“I was never a designer or anything like that, but as far as putting together what I was going to wear, I was a fashion rebel, always mixing it up,” he said. “As long as I remember, I always did something with my clothes. I would slice up the bottom of my jeans so that they would look different. I would change the design of my shirt and add an extra layer. I would wear two different tennis shoes.

“Fashion is very attractive, which fuels me and makes me want to give it more importance,” added Stoudemire, who also has designed basketball shoes for Nike, one of his sponsors. “That’s one thing about fashion: You can really, really tell someone’s type from what they are wearing.”

Stoudemire is now 28 years old, with a five-year, $100 million Knicks contract, and his sartorial taste has evolved quite a bit since those early days when he deliberately mismatched his sneakers. Waraire Boswell, the Los Angeles bespoke tailor, custom-makes his suits and shirts for obvious reasons, but Stoudemire said he also enjoys shopping at luxury boutiques. “I love Dior, Gucci, Louis Vuitton and Tom Ford,” he said. “I try to shop when there are not a lot of fans out. It’s a lot easier.”

He is not always in designer mode, though. “It depends on where I am going that day,” he said. “If I am going to practice, I don’t think much. I just put on some Nike sweats and Nike tennis shoes and I am good to go.”

Sports will play a major role in his collaboration with Roy for fall. Don’t expect the pieces to home in on active garb, though. “I am channeling a girl that goes to sporting events,” said Roy, whose past design collaborators for her secondary line were with Estelle, Jessica Stam and pro surfer Karina Petroni. “She goes to basketball events or maybe football events. She needs something that is modern, something that represents her in a way that doesn’t look like it just came out of a sporting goods shop.

“We want to give them sexy from the inside out,” she continued. “I think I would like to teach girls that you don’t necessarily have to wear high heels to watch sports, but you can be casually chic. What does Gisele wear when she goes to see her man [New England Patriots quarterback Tom Brady] play? What would Kate Moss wear? Those images are the inspiration as we’re designing.”

Not that that’s something Stoudemire and his fellow team players take much notice of during the game. “We are so focused on the game, and so in the heat of the moment, that it’s hard to see what people are wearing out there, but I do think women want to look sexy when they go to the sporting events,” Stoudemire offered.

The line is still in the early stages of development and there were no samples to speak of at press time, but the duo has already figured out a system that appears to work for both. After initial conversations during which they bounced concepts off each other, Roy started sketching, and Stoudemire has been picking his favorites to narrow down the final lineup. “I pretty much let her drive the car and I am just being the maintenance man,” Stoudemire said, smiling. “Basketball is a natural thing for me, and I have been playing basketball as long as I can remember, but designing is new to me. I never had to pick out sketches.”

“He is being very humble,” Roy chimed in. “He has a really strong point of view when it comes to design. He has to pick logos, and hangtags, buttons and zippers, the size of the collar and the type of leather. I want his stamp to be on everything, and I want the girls who buy the product to feel like it’s coming from him and designed by him. While I have a logo I prefer, I respect his opinion. There have been a lot of things that I would have perhaps chosen otherwise, but I want to respect my customer and have them know he has really chosen everything.”

At the meeting in Roy’s showroom, several of the visuals are scattered on the design table, most of which have a distinct graffiti feel to them. A few images have a vintage-looking “1” icon, in reference to Stoudemire’s jersey number, and some are takes on NBA logos, including vintage ones. Roy also added stars, taking the idea from the Star of David tattoo on Stoudemire’s hand. “I wanted to incorporate things that were authentic to him,” the designer said.

The line will launch in September at select Macy’s stores, macys.com and NBA.com, with retail prices from $45 to about $250. Jones declined to disclose projections for the line. Industry sources estimate the Rachel Rachel Roy business to be in the region of $150 million to $200 million at retail.

Jones’ top executives are clearly pleased with the collaboration, not least because of its association with a sports superstar.

“From art to music, model muses to the surf lifestyle, Rachel has always looked for unique partners to help create something interesting and different,” said Richard Dickson, president and chief executive officer of branded businesses at Jones, who brought along his two sons to meet Stoudemire. “Partnering with an athlete of Amar’e’s caliber, and combining both their visions into something unexpected, is something that truly defines the brand.”

Stoudemire and Roy are likely to help each other out beyond the one-season collaboration. Over the past few months, Stoudemire has repeatedly spoken of his desire to start his own line, and Roy could come in handy should he ever look for industry advice.

“I think the next step is beginning the process to have my own line,” Stoudemire admitted. “I really want to try and do something of this magnitude, probably in men’s wear and maybe in both.”

As for Roy, she has been getting her own perks from the partnership. “My 11-year-old daughter, Ava, is a bit of a tomboy and loves basketball,” she said. “Knicks tickets are hard to get, but my design partner is quite generous. I now take her to see the Knicks all the time, and her favorite player is definitely Amar’e.”

The new family favorite’s generosity is unlikely to end after the collaboration. Asked whether he will continue to help Roy with tickets to the games, Stoudemire didn’t hesitate. “Absolutely,” he said.