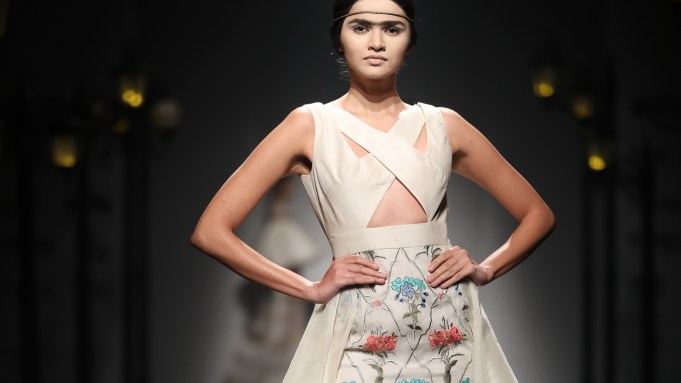 NEW DELHI — It wasn’t just about gardens at Amazon India Fashion Week for spring, but there were an awful lot of flowers — embroidered, glittering, French knots, cut outs, sequined. And this time they were offered in sustainable and unique silhouettes, bringing a new level of grandeur and simplicity over the five-day event, which is organized by the Fashion Design Council of India.

From the start — with Samant Chauhan keeping his signature style in ivory with a floral expanse on statuesque gowns — to the grand finale by Suneet Varma with a sheer wrap, bedecked with flowers, over dramatic black and silver, there was no doubt that florals were winning on the runway, having outpaced that much-loved, and more traditional, Indian paisley.

The fashion week, which ran Oct. 11 to 15, also had a clear theme of celebration for its 30th edition. It was about celebrating a few designers who were marking milestones — JJ Valaya and Ashish N Soni each marked 25 years in business, while Varma celebrated 30 years.

There was also a far more consistent focus on prêt-a-porter, as well as the first big leap into the “see-now-buy-now” movement.

“It’s a transformative time for the fashion industry,” said Arun Sirdeshmukh, business head of Amazon Fashion, as he talked about leveraging technology to turn the finale into “India’s first instantly shoppable runway. It’s the first time we are making designer wear that is accessible, affordable and available.

“We’re doing something that is for the long-term,” he said, still excited from the launch of Amazon Fashion’s 44,000-square-foot studio in Gurugram in September. It is the third location to open in the world, after London and New York, a space for imaging, video content and a collaboration with brands.

“We’re looking at how things should be three years out, five years out, taking those steps now that will give us this leadership. That’s part of the reason we invested in [department store chain] Shoppers Stop last month,” he said.

JJ Valaya showed off his classics, one of which was Gulistan, a paean to flowers. Another, Jamavar, is built around paisleys and a third, Punjab, a salute to the courtly, elaborate dressing of the maharajas of Kapurthala.

There were flowers in Nida Mahmood’s activewear collection, too, “designed to offer maximum comfort from the treadmill to the dance floor,” with innovative options — a running sari — and all of it made from 100 percent recycled plastic bottles, using quick dry, anti-microbial technology.

As Ashish N Soni came out to take a bow in pink trousers, they were in direct contrast to his all-black show. Although 80 percent of his creations are for men now, his show featured both men and women’s designs, with an interplay of masculine themes on women’s wear – tuxedo dresses, and more feminine cuts for men. “While I was in New York I did only women’s wear. When I came back I was told my designs were too forward for the market. But I enjoy doing both,” he remarked.

Samant Chauhan, like others, maintained last season’s focus on ivory, embroidered gowns embroidered but this time used large flowers instead of leaves.

“It’s about having a collection that can be identified, that makes a strong statement,” said Chauhan. “We have varied it to get new silhouettes; our technique has got better. It was different because we used lace, and organza; zardozi work, and French knots as a part of a new embroidery. It is also the first time we used print — a printed trouser with a plain spiral cut white jacket with a flare. That was a bestseller for this season.”

Among those taking exhibition space during the week was Urvashi Kaur, whose collection played with comfort and simplicity, while sustainable fabrics showcased the modern sensibility that was also part of the draw of this fashion week. Kaur, who has worked with Issey Miyake and Marcel Marongiu, said that the changing face of fashion was more global in its sensibility, with her designs as much in tune with Indian markets as those in Paris or London. “It is a cross cultural, contemporary aesthetic in India as well,” she said.

The play with materials was creative this season — as in Rimzim Dadu’s striking metal weave sari in pale blue and the hand embroidered chanderi and mesh in the opening show.

The grand finale was a moment f0r instant gratification — available right away at The Designer Boutique at Amazon.in. – “part of our move to make designer wear affordable, available and accessible,” Amazon’s Sirdeshmukh explained. The boutique has 12,000 products available ranging from 1,500 rupees, or $22.50, to 30,000 rupees, or $450.

The opulent, varied, and elaborate designs of Varma made up the second part of the finale. Varma said queries were coming in from buyers from different parts of the world on his Instagram within 24 hours.

Varma said the DNA of Varma has always been, and remains, very floral. It is also influenced by his other collaborations — with Judith Leiber for six to seven years, with a jewelry line with Swarovski, and with Arttd’inox, a kitchenware and dinnerware line. “I think the benchmarks you set for yourself are really up to you. You also have to keep editing yourself — for this collection we showed 36 pieces, but we made almost double of that and planned for five times as many.”