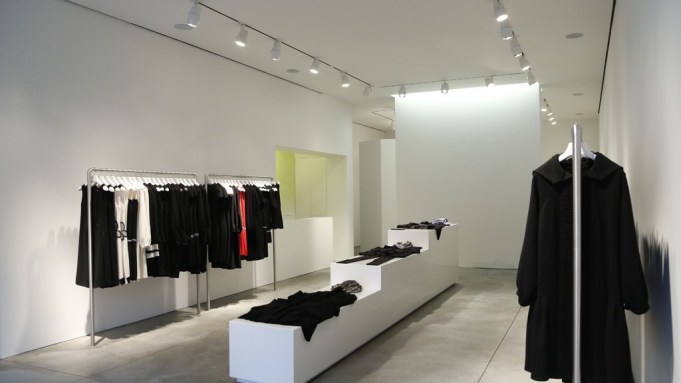 Early last month Amelia Toro quietly opened her New York flagship at 229 10th Avenue, just above 23rd Street. It is a vast, gallerylike space — 5,000 square feet spread over two floors — in an area not known for its high-volume fashion retail traffic, which makes it an interesting location for a little-known label trying to gain traction in the U.S.

The store is part of a big push for Toro, who is based in Bogota, Colombia, and is working on a reintroduction of sorts to New York. She originally launched her collection out of Bogota in 1990, selling in South America before gaining small distribution in the States. She opened a SoHo store in 2001 just before the Sept. 11 attacks, and closed it soon after. Then in 2008 she shuttered the business entirely, taking time off to refocus.

Now she’s back and means business. Not only has Toro, whose family was the main exporter of Colombian coffee for years, taken a massive piece of real estate, but she’s hired someone with experience in destination retail to run the store and wholesale business. Tony Newsham, who oversaw Comme des Garçons’ wholesale and domestic retail operations for 12 years, including opening the company’s iconic Chelsea store, joined Toro as chief executive officer in June. He was immediately charged with scouting the New York space.

“It would have been ridiculous to go uptown, a) because of the rents and b) because we’re trying to do business with department stores,” said Newsham, who confirmed that the collection will be carried at Saks Fifth Avenue, Barneys New York, Maxfield and Ikram in Chicago for spring.

There is a feel-good angle to the collection, which is produced locally in Colombia using fabrics sourced from Europe. Toro is an advocate of women, investing in single mothers and others who face socioeconomic challenges by supporting a stable business environment. Each garment is personally signed by the artisan or seamstress who produced it. Such a practice has become quite fashionable among the inner circles and a few hot emerging brands, such as Suno and Maiyet, but Toro has been doing it for years.

After studying at Rhode Island School of Design and Parsons School of Design in the Eighties, she went to work for Gianfranco Ferré and Pino Lachetti in Italy before returning to Colombia when the country was in the midst of a war.

“I felt that there was a lot one could do to help these countries in Latin America,” said Toro, via phone from Bogota. “There’s a lot of poverty. When I came back it was a wartime. I decided to stay here, and there was also very little fashion so I started with a small shop and teaching women [how to] work.”

She has worked with Queen Sofia of Spain’s Women Together Foundation that supports low-income women, participating in a 2006 fashion show held at the United Nations, at which Angelina Jolie and Shakira were guests.

Toro’s clothes are not overtly ethnic in their design. With rather subtle touches — embroidered trims on a black wool crepe dress — the pieces seem apropos of the neighborhood’s arty vibe. Prices range from $485 for pants to $1,725 for coats. The spring collection, which hangs in the second floor showroom, bears more of a tribal touch with lots of white and colorful embellishments. There are also tribal bags, and more classic shoes and leather pieces that are produced in Italy.