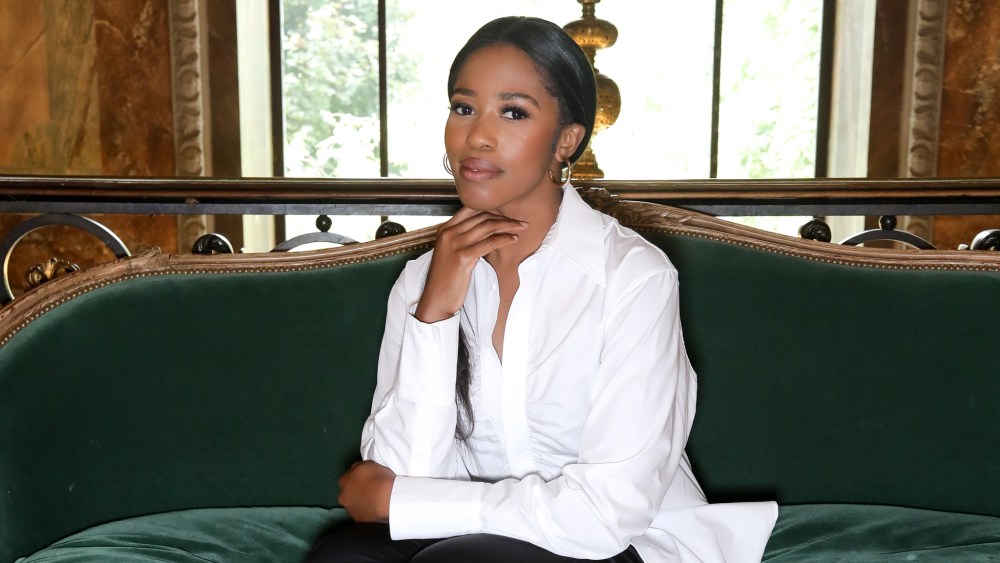 Designers from the burgeoning men’s fashion universe grabbed the spotlight on Thursday in Paris, nabbing the two top prizes at the 2021 ANDAM awards, the 32nd edition of the annual design competition.

Saunders said she plans to show her spring 2022 collection at London Fashion Week in September during what is normally the women’s showcase — speaking to the importance of men’s wear in fashion today.

The designer said she would “wait for the mentoring to kick in” before deciding how to best utilize the prize money, with her online store among key priorities.

While drawing on her British and West Indian background, Saunders also questions existing notions of masculinity in her designs.

“My main aim for the brand was to create that balance. You get the really over-masculine guy and effeminate guy existing in the same world. Even the pieces can be seen as slightly more feminine. I think this is how I create the energy that brings something different, and more things to the men’s wear conversation,” the Royal College of Art graduate told WWD recently.

Charbit lauded that Saunders “presented a solid and unique project anchored in the now and today’s values.”

She beat out the other six finalists for the main award — GmbH, Wales Bonner, Area, Rokh, Ludovic de Saint-Sernin and Casablanca — though Charbit revealed he would offer a year of mentoring to Grace Wales Bonner, also a men’s wear specialist.

The Pierre Bergé Prize, which focuses on young French companies and is worth 100,000 euros, went to EgonLab, a brand introduced in 2019 by Florentin Glémarec and Kévin Nompeix. The duo showed their spring 2022 effort during Paris Fashion Week Men’s last month, peppering the collection with chivalric references.

Glémarec and Nompeix launched their brand, which they bill as genderless, just before the pandemic. “Working outside the pandemic is going to be new for us,” Nompeix said.

They plan to use the prize money to grow their team and stage a physical fashion show in January.

“We think a brand should cater to and defend all genders. Inclusivity is not just about targeting a minority. Real inclusivity is when you talk to everyone and we want to go the whole way with that approach,” he said. “We think it’s the future of fashion.”

Putting their money where their mouth is, the duo enlisted Glémarec’s grandparents, René and Marie-Louise, to model some looks in their presentation to the jury earlier that afternoon.

The Fashion Accessories Prize, which comes with a sum of 50,000 euros, went to leather goods specialist Aswad.

Sonia Ahmimou founded the Aswad leather goods workshop in Paris in 2015 after spending more than a decade learning the métier at Louis Vuitton, Moynat and Hermès.

She posits her aesthetic “at the crossroads of Moroccan and French craftsmanship,” yielding sleek bags, some with zippered external compartments, along with small leather goods.

The winners were revealed at an open-air ceremony in the picturesque gardens of the Palais-Royal in Paris, attended by top fashion executives, designers, members of the jury, and journalists.

The other finalists for the Pierre Bergé Prize were Ester Manas, Uniforme Paris and Charles de Vilmorin, while the other contenders for the Accessories Prize were jeweler Samuel François and Austrian studio Published By, which makes chrome bags and silver jewelry.

This year’s edition, with Charbit as president of the jury, boasted a star-studded list of guest jurors, headlined by Lalisa Manobal, known simply as Lisa to Blackpink’s legion of fans, along with Chinese singer Chris Lee and fashion designers Kerby Jean-Raymond and Phoebe Philo.

Charbit had decided to throw the door open to all manner of creative types to reflect a changing topography of influence as the traditional fashion gatekeepers — magazine editors and retailers — yield to photographers, educators, business disruptors, stylists, entertainers, digital enterprises and next-gen media personalities.

Given travel restrictions and other pandemic-related challenges, much of the jury work was done remotely.

Created in 1989 by Dufour with the support of the French Ministry of Culture and the DEFI and with the late Pierre Bergé as president, ANDAM — the French acronym for National Association of the Development of the Fashion Arts — has been a springboard for designers who would go on to achieve international recognition.

ANDAM was one of the first fashion prizes to add a yearlong mentorship, starting in 2011 when luxury executive Ralph Toledano, now president of the Fédération de la Haute Couture et de la Mode, was paired with that year’s winner Anthony Vaccarello, now the creative director of Saint Laurent.

Meet the Finalists for the 2021 ANDAM Fashion Award