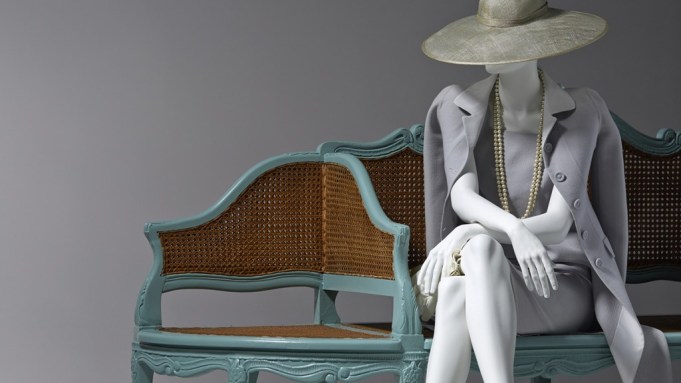 André Leon Talley is paying tribute to his friend Oscar de la Renta with an exhibition at the SCAD Museum of Art that opens Feb. 5 on the Savannah campus.

Not long after the designer’s death in October, Talley presented the idea to de la Renta’s son-in-law and the chief executive officer of the designer’s company Alex Bolen. Although it wasn’t an overnight decision, Bolen and his wife Eliza were in favor of the show and have been kept up to speed about its developments.

“First of all, Andre and Oscar have been friends for about a thousand years,” Bolen said. “We have immense respect for Andre’s professionalism, and we also love him.”

Eliza Bolen, who has known Talley since she was a child, provided her wedding dress for the exhibition. There will also be de la Renta designs for Nicole Kidman and Sarah Jessica Parker amidst the 70 ensembles on display. The one exception is the Ralph Lauren white tie Andy Cohen wore to escort Parker to last year’s Met Ball. More striking will be Taylor Swift’s Oscar de la Renta pink dress that she preened in at last year’s Charles James-themed Met Ball, the velvet dress Hillary Clinton wore for her 1998 Vogue cover, and four of Laura Bush’s “Oscars” so to speak are among Talley’s finds for the show, which will run through May 3.

Another essential component are items de la Renta designed for his wife Annette. Talley said, “He considered his wife to be his most important muse. Her clothes are wonderful, really vital, and they make the exhibit, to me, complete.”

Despite describing the project as “a work of joy and wonderful pleasure because Oscar was a very close friend of mine and also a mentor,” there was a certain amount of emotion tied to the endeavor. Talley needed a moment when shooting de la Renta-designed dress that Elizabeth Cordry wore to her wedding in June, which was the last time Talley saw de la Renta “I had to put on a requiem from Mozart. I turned it off quickly, but I put it on because it was such a moment. The dress was so beautiful and that was the last time I saw him, and I had been to fittings with Elizabeth for that dress. It was Requiem, K. 626 Sir Georg Solti, recorded live in Vienna to commemorate the 200th anniversary of Mozart’s death in 1991,” he said. “The whole thing has been done out of a sense of love and to celebrate Oscar, what he meant to American fashion and his style.”

In addition to the SCAD exhibition, Talley is at work on a book titled “Oscar de la Renta: His Legendary World of Style” that Rizzoli will publish in September.

After meeting de la Renta in 1974 when he was at Interview magazine, Talley said he became very friendly with de la Renta’s first wife Françoise de Langlade. During Talley’s WWD days in the mid-Seventies, she would call him first thing every morning to see what he had gotten up to the night before.

Talley made a point of saying the exhibition was by no means a retrospective, but “my interpretation of Oscar’s legacy through his work and my memory of it.”

The show, which will be the fifth one Talley has curated for SCAD, will be staged in the gallery named in his honor. The irrepressible former Vogue editor, a longtime member of SCAD’s Board of Trustees, also has a Lifetime Achievement Award named for him. In what seems to epitomize coming full circle, Talley presented the inaugural award to de la Renta in 2001.

As for whether he wonders what de la Renta would have made of the exhibition, Talley said, “Definitely. I don’t move without Oscar on my shoulders. I think, ‘Would Oscar approve? Would Oscar like it?’”