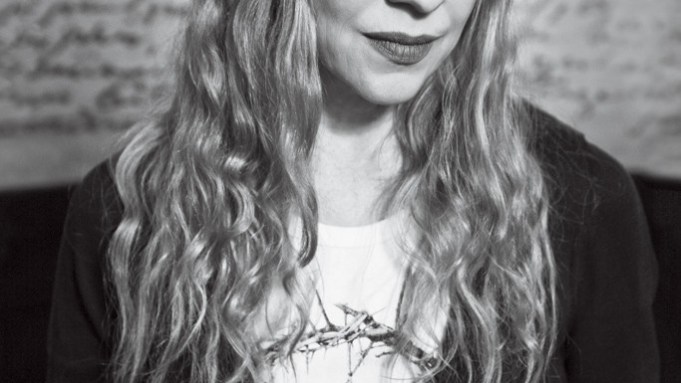 PARIS — Fittingly for one of fashion’s melancholy poets, Ann Demeulemeester on Wednesday bowed out of fashion with a letter handwritten with a fountain pen, signed at the end with an “X” to represent a single kiss.

One of the original Antwerp Six who helped put that small Belgian city on the global fashion map with her soigné tailoring and dark glamour, Demeulemeester said she had prepared her exit in concert with the company, controlled by entrepreneur Anne Chapelle, “and they feel ready to bring the brand further into the future.”

“As a young girl, I dreamed of having a voice in fashion,” she wrote. “I worked hard to realize this dream and now I feel that I accomplished this mission. I have always followed my own path.

“A new time is coming both for my personal life and the brand Ann Demeulemeester. I feel it’s time to separate our paths.”

She added that her brand is now an adult “with its own identity and legacy that is able to continue growing without me. I trust the company and the people that worked with me.”

She noted the women’s and men’s collections for fall 2014 would be presented on the runway together during Paris Fashion Week on Feb. 27. (The men’s collection is to be sold in its showrooms in January.)

“I want to thank all of you with all my heart for the trust and support you have given me,” she wrote. “I feel proud of what we realized together.”

Asked if there was any plan to replace Demeulemeester with another designer, Chapelle told WWD via e-mail, “There is a full team ready in the house, trained by Ann over many years. Nothing will change.”

She noted that the founding designer had a hand in the fall 2014 season “and the soul of Mrs. Demeulemeester will continue to be in all the future collections.”

Asked about the designer’s plans for the future, Chapelle replied: “There are more opportunities in life than fashion.”

She added that she is confident that a business “with such a strong identity will continue growing. We all have a positive view on the future.”

As for the separation, Chapelle stressed there was “no disagreement at all. We still carry the name together,” suggesting Demeulemeester retains a stake.

While she declined to give specifics about the shareholding structure, she said the entity Edu NV controls the company and that she is its “main” shareholder.

A Belgian entrepreneur who had been managing director of Demeulemeester’s business since 1994, Chapelle acquired an undisclosed stake in the company in 2005.

The following year, she took a stake in Haider Ackermann, another designer in the moody vein.

As a possible precursor to Wednesday’s development, Chapelle in June split the Demeulemeester and Ackermann labels into two independent companies. Previously, they were embedded in the same parent, 32 BVBA.

At the time, Chapelle said the change reflected the fact that the Ackermann business has “fully matured over the years, becoming a fully stable and independent business on its own. This is a question of internal optimization, enabling both brands full freedom to grow.”

On Wednesday, Chapelle declined to quantify how the Demeulemeester brand was performing, other than “very well, thank you.”

In June, she had forecast seasonal growth of 3 to 8 percent for the Ackermann and Demeulemeester businesses combined, which she characterized as a “beautiful increase” given the morose economic climate and two labels’ reliance on apparel rather than accessories.

Market sources estimate the Demeuleemester business is approaching $50 million in revenues. The firm operates freestanding stores in Antwerp, Hong Kong and Tokyo, and wholesales to an array of international retailers including Saks Fifth Avenue and Barneys New York in America, L’Eclaireur and Le Bon Marché in Paris and Lane Crawford and Joyce in Hong Kong.

Reflecting her cult following, retailers expressed dismay at the development.

Ed Burstell, managing director of Liberty in London who previously worked at Henri Bendel and carried the line there, called the news “distressing.

“We have had a thriving business for years,” he said. “What makes Ann so important is her consistently unique design vision over time, always gently moving forward, but never too fast or too far from her DNA.”

“This [fall] has been our most successful season to date with Ann’s collection, so we are of course very sad to see her go,” said Laura Larbalestier, buying director at Browns in London.

“Ann has been with Barneys for over 25 years and built an incredible men’s and women’s business,” said Daniella Vitale, Barneys New York chief operating officer and senior executive vice president. “You have to admire how focused she is and never veering from her signature taste or style. She has her own distinct identity, as does her collection. We all, including her loyal customers, appreciate that and will all be disappointed to see her go.”

A graduate of Antwerp’s Royal Academy of Fine Arts, whose fashion school marked its 50th anniversary this year, Demeulemeester set up her company, 32 BVBA, with her husband, photographer Patrick Robyn, in 1985, and produced her first collection for the fall 1987 season, adding shoes and accessories the following year.

She began showing in Paris in 1992 and quickly became a fashion star, with WWD anointing her “Queen Ann” in a headline following a blockbuster collection in 1995 that would influence runways in other fashion capitals.

From the get-go, Demeulemeester shunned the limelight, preferring the sanctity of her house — a three-story 1926 design by Le Corbusier — and her hulking gray atelier by architect Georges Baines next door.

“It’s important for me to be on my own, in my own world, to ask all my questions again to myself,” she said in a 1995 interview with W magazine. “I put my heart and my soul into my work.”

Demeulemeester mined a dark and romantic fashion vein, and built on an inimitable approach to tailoring that often referenced men’s wear and military styles. Delicate blouses, sumptuous leather jackets, sturdy riding boots and feather necklaces were also part of her mix of tough and tender.

“Journalists tend to label me Gothic, and I hate it. I’m not Gothic at all,” she told WWD in 2010. She counted her musician friend Patti Smith among her muses, along with poets such as Arthur Rimbaud and Hermann Hesse, and artists such as Jackson Pollock and Jim Dine.

Like most Belgian designers, making solid, flattering garments was a key focus.

“I never show anything I haven’t tried on myself,” she said in 1995. “It can be very beautiful, but if I don’t feel good in it, if I feel ridiculous, I can’t put it in the collection. I have a big respect for women and I don’t want to make them look stupid or like dolls, you know?”

While she added men’s wear to her fashion universe in 2005 and it grew to more than 20 percent of the business, Demeulemeester, like many of her Antwerp brethren, resisted many of the strategies employed by today’s luxury groups to drive sales: pre-collections, celebrity dressing, “It” bags and advertising.

In a 2006 interview, she sounded confident as her sales vaulted 60 percent that year as fashion, after years of exaggerated femininity, ruffles and ribbons, swung back to Belgian fashion’s terra firma: sobriety and tailoring.

“If fashion comes more in my direction, I’m very happy with that,” she said at the time. “But for me, it’s just another step. It’s the waves of fashion. I’m here now for 20 years. It comes [in] my direction, and then it goes away from me. I’m used to that.”

Demeulemeester is the latest designer of her generation to bow out of the fashion business, following Helmut Lang’s exit in 2005 and Martin Margiela’s final disappearing act in 2009.

In Wednesday’s letter, Demeulemeester sounded sanguine about her decision.

“I’m a happy and fulfilled person, ready to create new challenges in life,” she wrote.

Some of Demeulemeester’s early designs are currently on display at the Antwerp fashion museum MoMu as part of its “Happy Birthday Dear Academie” exhibition. They are showcased alongside the work of her “Six” classmates from 1980 to 1982: Dries Van Noten, Dirk Bikkembergs, Marina Yee, Walter Van Beirendonck and Dirk Van Saene.

During the 2010 interview, Demeulemeester seemed to crystallize her mission, and hinted at her legacy.

“My duty is to believe in beauty, hope and emotion and I want to show that in my work,” she said. “That is my raison d’être. If people say, when I’m dead, ‘She was the one who added emotion to fashion,’ I’d be very happy with that.”