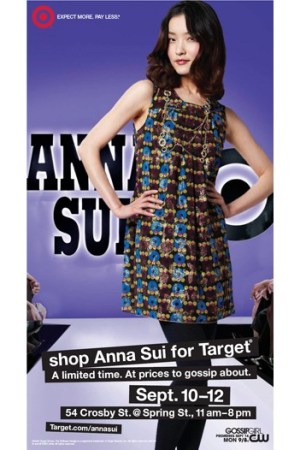 NEW YORK — It probably goes without saying that privileged Upper East Side denizens Serena van der Woodsen, Blair Waldorf, Jenny Humphrey and Vanessa Abrams don’t shop for their frocks at Target. After all, the four “Gossip Girls” collectively own enough designer garments to fill a warehouse.

But that may change now. Anna Sui for Target, part of the retailer’s Designer Collaboration series, channels the well-dressed women of “Gossip Girl” and debuts in 600 select Target stores out of more than 1,700 units, and on Sunday at target.com/annasui.

Sui had wanted to design for Target for some time but “couldn’t figure out what the concept would be,” she said. When the retailer approached her with Designer Collaborations and the muse element, the project began to make more sense. During a trip to China in January when she was launching a fragrance, Sui said she was bombarded by teenagers asking the same questions related to “Gossip Girl”: “Where’s Williamsburg?” and “What’s uptown?”

Sui has become a serious fan of the show. “I thought the characters were so dynamic, so different and each represented a different aspect of my design,” said the designer. In the Target collection, Serena’s European heritage and relaxed American style led to a leather jacket, $149.99; Blair’s love of old-time glamour and modern fabrics informed a metallic jacquard dress, $59.99; Jenny’s penchant for uptown couture inspired a silk off-the-shoulder striped dress, $59.99, and Vanessa’s bold personality is reflected in a sleeveless silk wrap dress, $59.99.

Target is turning a private four-story townhouse at 54 Crosby Street in SoHo into a pop-up shop from Thursday to Saturday, with rooms decorated to reflect each character’s tastes. “We’ll have four vignettes based on the four characters, along with live models to bring the collection to life,” said Target spokesman Joshua Thomas.

A launch party is slated for today. For Thursday’s public grand opening, which coincides with Fashion’s Night Out, the pop-up will stay open until 11 p.m. rather than the regular 8 p.m. FNO T-shirts will be sold, with proceeds benefitting the national 9/11 Memorial Museum.

From Target’s perspective, all roads lead to Crosby Street. Teams wearing Anna Sui for Target T-shirts will hand out invitations to the pop-up shop. Clean ads or reverse graffiti will cover sidewalks from Sui’s Greene Street boutique to the townhouse, and symbols such as the Target bull’s-eye and Anna Sui logo will be projected onto the exterior of buildings in SoHo and the Meatpacking District. Viral ads will appear on taxi screens when cabs come to within half a mile of Sui’s boutique or sites featured in “Gossip Girl” storylines.

Sui said she loves “Gossip Girl” for its unabashed embrace of fashion. “It’s so fantastic,” she said. “Young kids have something to look forward to: getting dressed up.”