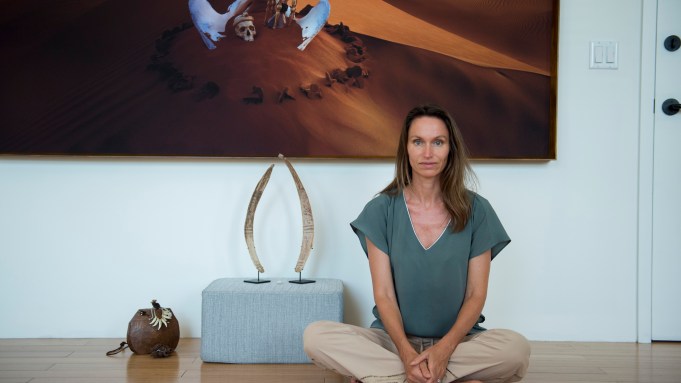 Anne de Carbuccia is taking a global approach to sustainability.

The fine art photographer is mounting an immersive installation, titled “One Planet One Future,” at Westbeth Artists Community on the West Side of Manhattan, which officially opens Sept. 16. She plans to flood a raw basement space (which itself was flooded during Hurricane Sandy), building walkways into separate rooms where her large-scale photographs of her own-designed “shrines” will be on display.

De Carbuccia’s photographs literally span the globe’s landscapes — her travels for work have taken her to Antarctica, the Amazon rain forest, Mount Everest, the Maldives, Africa, the Mekong Delta and beyond. “I don’t know how much I choose my places or how much they choose me,” she says.

In each of those places, she utilizes elements from the landscape around her and combines those with the hourglass and vanity to build her “Time Shrines” — these can range from the tusks of a poached elephant in Africa to plastic bottles that were floating in the sea off the Maldives to the trash she encountered and collected on the slopes of Everest. She then photographs the landscape, with the shrine as the centerpiece.

She will use the same idea to build a “Time Shrine” for the New York exhibit, utilizing things she has collected on a tour of the five boroughs of the city.

While the result is clearly artistic, the real focus of her work is to raise awareness about ecological concerns. “Working with this project, I’ve been traveling so much, I’ve seen how things are accelerating, and it’s getting worse,” says de Carbuccia who, when she isn’t traveling, lives in Milan with her husband and young son. Her two daughters attend college in the U.S.

“My main subject is water; I think that’s probably the most important issue we have today. It goes from receding glaciers in Antarctica to erosion, drought, refugees in war.”

She also works closely with sanctuaries that protect endangered animals.

De Carbuccia’s photographs use only minimal Photoshopping — she’ll take out small traces, such as her own tracks — but there’s no major retouching or cutting and pasting. Everything in the photos was encountered or assembled by her on location. “My work is about time. The way I print and the first impression a viewer will have is you’re not exactly sure if it’s a painting or a drawing or a photograph. That’s also my way of playing with your sense of time.”

Through her Time Shrine Foundation, proceeds from her work are donated to support various causes related to the subject in her photos — a purchase of a photograph with elephants will benefit an elephant rescue center, for example. Many of these are at the local level, and often are the ones she has worked with for her photographs. “I think that if you have a message, you need to give the example,” she says. “You can’t make shrines for profit.”

As part of the New York exhibit, de Carbuccia has also teamed with environmentally minded companies to produce water bottles and reusable bags that will be sold during the installation’s run. Sustainable Italian fiber company Aquafil is behind the bags. “I think it’s one step at a time to change people’s attitudes,” she says. “I wanted to make something to replace the plastic bag. Aquafil takes all of the fishnets out of the sea and old carpets and all of that and makes it into a new green, clean nylon.”

While de Carbuccia is passionate about her shrines and photographs, her real hope is that her work and the Manhattan exhibit help inspire people to embrace the circular economy and be more mindful of their choices. She isn’t preaching total abstinence from consumption, or that we give up creature comforts. Instead, she simply wants people to be aware of the danger the planet is in — and how the tiniest change in our behavior, like using a bag made out of recycled nylon, can have a significant impact.

“I believe that we’re going through one of the most transitional moments in the history of humankind,” she says. “With transition comes choices and awareness. My story is about creating a beautiful installation that will speak to you and make you more aware of what we have, what we’re losing, and what we’d like to keep.”

“One Planet One Future” is on view at Westbeth Center for the Arts Sept. 16 through Nov. 21.