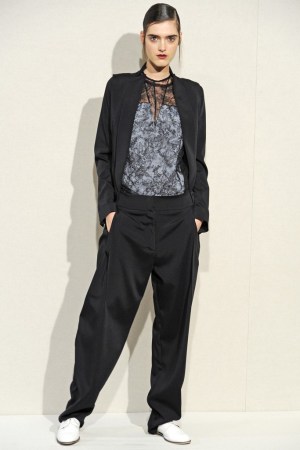 PARIS — Signaling challenging times for independent fashion labels, Anne Valérie Hash said she would sit out the fall fashion season and not present any collection during Paris Fashion Week, which runs from Feb. 25 to March 5.

She said she would return in six months to a year with a new project, hinting it would involve a new way to present her fashions.

“Part of the creative process involves taking a step back,” she said. “I am in a moment where I need to observe what’s around me.”

Her move echoes that of designer Martine Sitbon, who last September said she would take a sabbatical of at least one year, putting her Rue du Mail collection on hold.

One of French fashion’s smallest but bravest entrepreneurs, Hash launched her label in 2001 and found a niche with her plays on the masculine-feminine dichotomy and such signature silhouettes as jumpsuits and tuxedos.

She started out showing during the Paris couture schedule in a bid to stand out from the ready-to-wear fray.

In 2006, she set up shop in a 5,000-square-foot space that was a notorious bordello in the Thirties. She retreated there in recent seasons and staged small-scale rtw shows.