Louis Vuitton taps a total of six personalities, among them Annie Leibovitz and Damien Hirst, to dream up special-order leather goods. 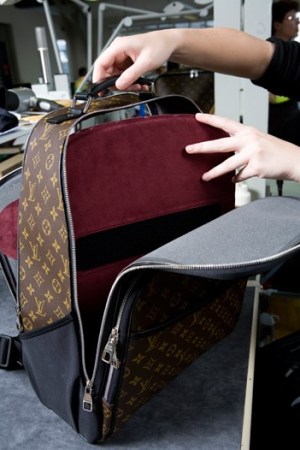 Leibovitz is one of six personalities tapped by Vuitton to dream up some special-order leather goods to be realized by the brand’s master craftsmen at its Asnieres workshop near Paris. The designs are to be auctioned off at Sotheby’s in London on Nov. 17 in aid of the Red Cross as the charity celebrates its 150th anniversary.

No fan of purses, Leibovitz requested a backpack roomy enough to accommodate her personal effects and photo equipment and leave her hands free. In monogram canvas, the backpack is trimmed in black leather and lined with red, cushioned microfiber compartments. Given her extensive equipment, there’s also a matching rectangular shoulder bag for cameras, with external zippered compartments for other accoutrements.

Vuitton’s creative director, Marc Jacobs, requested a chic trunk so his treasured bull terriers, Daisy and Alfred, could travel in style in the hold of an aircraft.

Held together with 1,500 nails, the trunk boasts a wire door, large vents, a zinc dish and space for a photo of Jacobs and a sample of his clothing to reassure his pets during flights.

Meanwhile, Oscar-winning composer Gustavo Santaolalla requested a case for his favorite ronroco, a stringed instrument; Spanish chef Ferran Adrià a set of luggage to accommodate everything from spatulas to his chef’s jacket, and Patrick-Louis Vuitton, head of special orders at Vuitton and a fifth-generation family member, a case for all the equipment needed for watercolor painting.

Vuitton, whose Asnieres facility also turns 150 years old this year, has a long tradition of special orders, from the foldout trunk-beds of yore to solar-powered DVD trunks of modern times.