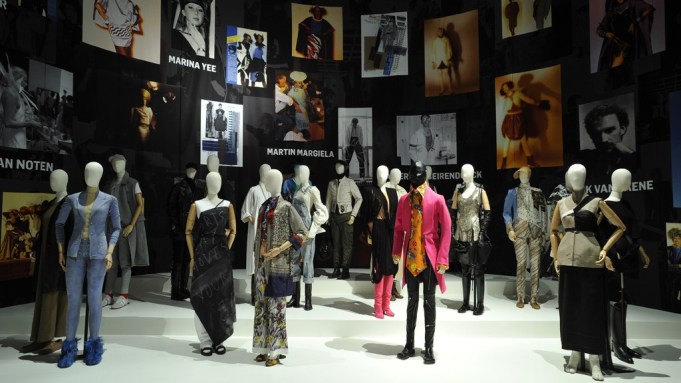 ANTWERP, Belgium — Antwerp is prepping for a major fashion moment, and a big alumni reunion.

The fashion department of the Antwerp Royal Academy of Fine Arts is celebrating its 50th year with an exhibition at the MoMu, the city’s fashion museum. Concurrently, there is an outdoor art project where 12 outfits by Belgian fashion designers such as Ann Demeulemeester, Dries Van Noten, Dirk Bikkembergs, Martin Margiela, Peter Pilotto and Christian Wijnants are displayed in large-format photographs. The towering images were placed at different locations around the city.

These constitute parts of the citywide “Happy Birthday Dear Academie” celebration of the 350th anniversary of the Antwerp academy.

Festivities include a reunion and a ball on Saturday. “There will be so many faces I have not seen for a long time,” said Walter Van Beirendonck, head of the fashion department and curator of the MoMu exhibit.

The showcase, which opens to the public on Sunday and runs through Feb. 16, brings together about 80 original silhouettes, as well as sketches and accessories from the students in the graduate program.

“I was there as a student,” Van Beirendonck recalled in an interview. “I came back as a teacher only two years after graduating. I overviewed almost 30 years, so it was easier [to curate the exhibit] as I remembered many things.”

The exhibition starts with a time line in the stairwell. One video clip depicts a shoot in which second-year students were assigned to design historic costumes. They include the 1980-82 class’ famous Antwerp Six — Demeulemeester, Van Noten, Bikkembergs, Marina Yee, Van Beirendonck and Dirk Van Saene — plus Margiela donning the costumes they had made.

“It was a very dynamic moment, we were ambitious, we really wanted to become fashion designers,” said Van Beirendonck. “We were enormously stimulated by seeing everything that happened in fashion at that time. When we started studying, the whole thing happened in Italy with Versace and Armani starting up; the year after, with Thierry Mugler and Claude Montana who started in Paris; then the year after, in Japan with Comme des Garçons and Yohji Yamamoto. These were all statements from individual designers. That was so inspiring; that gave us a boost to go for it. We were very young, very ambitious, a little bit impatient; that created a nice energy in the group and also a synergy.”

“We selected 120 silhouettes, and only 80 could be used for the show. Some outfits of them were lost, some were broken.…It was a big search to get all these pieces together,” Van Beirendonck said.

Graduation projects of students are gathered under the heading Arcadia, referring to nature. Van Beirendonck’s 1980 effort was inspired by insects and includes a hand-knit sweater in wool with a butterfly motif.

A subsequent room displays silhouettes from various designers’ labels, including ones by Kris Van Assche and white knits from Wijnants, now a knitwear professor at the department.

One wall is covered with drawings and sketches including three original pieces from Margiela that are quite classic. “He was not born deconstructed,” said Van Beirendonck. “We were coming to school in Antwerp, raised in a traditional way. Martin was a very good drawer. He had a sense of elegance, which he has always had. He became more conceptual, because of how he wanted his house to be.”

The tour culminates in a room dedicated to silhouettes of the Antwerp Six and Margiela, with a soundtrack from such artists as Patti Smith, Donna Summer and the Sex Pistols.