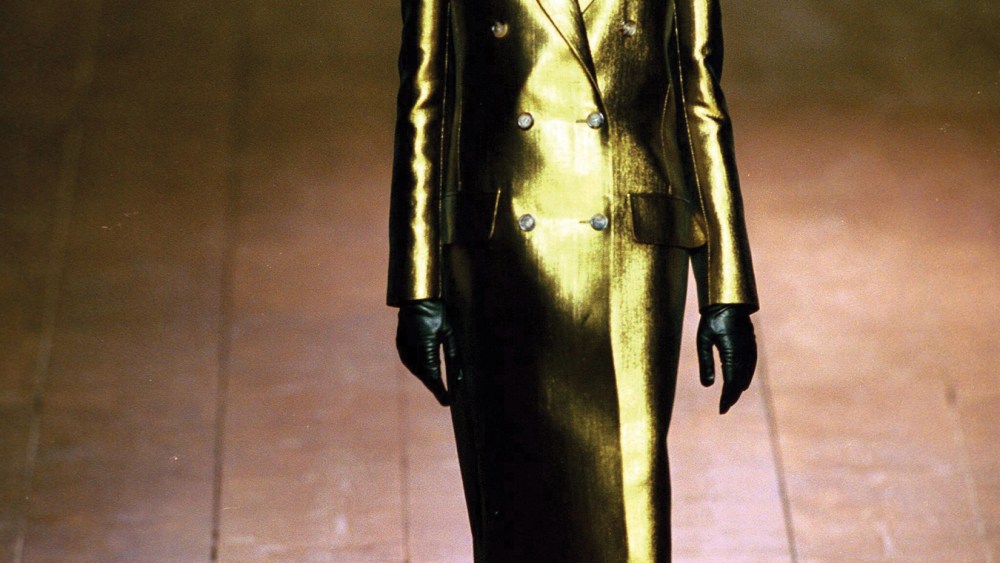 The center of gravity for Yves Saint Laurent — tilted toward California and the indie rock scene under Hedi Slimane — is to return to Paris under new creative director Anthony Vaccarello.

And confidants of the unassuming Belgian designer also assure that he will put his stamp on the storied house, describing a laser-focused fashion vision, a design-intensive approach and meticulous attention to detail.

“I think Saint Laurent will become more Anthony Vaccarello — very cool but very chic,” said model and entrepreneur Anja Rubik, who has exposed her hipbone multiple times in his barely there dresses, and who acts as his official muse. “I think there will be a new wave of elegance.”

Rubik is among those in the Vaccarello camp who are confident he can propel Saint Laurent in a new direction — a fact suggested by the house itself, which recently zapped all Slimane imagery from its Instagram account of 360,000 followers. Now there’s one post: Vaccarello’s new official portrait by Inez Van Lamsweerde and Vinoodh Matadin.

Vaccarello plans to hold his tongue until his debut for spring 2017 in Paris next October, declining a request for an interview. Yet retailers and fashion executives are sanguine that the 36-year-old, who will shutter his seven-year-old signature brand to devote himself to YSL, will rise to the challenge.

“Anthony is an excellent designer who will move into his role as YSL’s head designer with talent and grace,” said Ikram Goldman, owner of Chicago boutique Ikram. “His solid following for his namesake collection combined with the YSL heritage will be a win-win for all.”

WWD was the first to report on Jan. 13 that Vaccarello was poised to succeed Slimane, who had at that point failed to reach an agreement on a new employment pact. The changing of the guard was made official on April 4.

Puig fashion president Ralph Toledano, who coached Vaccarello following that win, said the designer’s charisma, intelligence and drive is exceptional. The executive also describes him as “tremendously hardworking. When I met him, he was doing everything: designing the garments, sewing the garments, selling the garments.”

According to Toledano, Vaccarello realized that he needed to find a niche in a crowded marketplace — and sharp, sexy women’s wear quickly became his calling card.

“Anthony understood that to stand out, he needed to have a very clear identity,” Toledano said. “I find it very smart to have selected him for Saint Laurent. He’s going to build on the platform Hedi established with a lot of design and creativity. He’s obsessed by every single detail. He’s a perfectionist, like all great designers.”

“I love the fact that he is so precise with his vision of his brand,” Rubik agreed. “He seems very calm, very shy, but there’s a real passion and strength behind what he does. He really loves designing. He thinks about it 24 hours a day.”

Rubik noted he doesn’t sketch, preferring to start with mood boards, and then drapes fabrics directly on the body.

Gianni Versace and Yves Saint Laurent are among his design icons, while movies, music and contemporary art feed his ideas, according to Rubik. While he’s partial to black, the model has nudged him toward color, requesting a white dress for the 2012 Met Ball, and then red for the punk-themed gala the next year.

“I call it intelligent fashion because every single detail, including the way the clothes fall, is done by design,” Rubik said. “It’s quite sharp, and there’s a touch of masculinity in his designs. There’s this sexiness in the way he interprets masculinity for women.”

“He’s inspired by all women. He loves women,” enthused Saif Mahdhi, president of Next Models in Europe, who guided Vaccarello early in his career and had models clamoring to walk his shows, and wear his hot-blooded clothes. “I could see in his DNA hints of Helmut Lang, Azzedine Alaïa and Gianni Versace — minimalist, chic and sensual.”

Vaccarello’s gang of chic Parisians include Lou Doillon, Caroline de Maigret and Charlotte Gainsbourg, who has fronted campaigns for Balenciaga and Louis Vuitton and could be ripe for a Saint Laurent role.

To be sure, retailers are largely positive about the latest designer shakeup.

Jeffrey Kalinsky, founder of Jeffrey stores in New York and Atlanta, lauded Vaccarello for his “very studied, sophisticated approach to very sexy clothes,” while acknowledging they’re not for everyone. “They’re very bold. It takes a certain woman to have the confidence to wear the clothes,” he said, listing a “great body” among minimum requirements.

“We know he knows sexy and attitude, without having attitude personally. He’s also skilled in tailoring and construction, all characteristics necessary here,” she pointed out.

But Fargo was on the fence about whether the Belgian should make a clean break with the Hedi era.

“While disruptive strategies have been the tack of choice these days, only Anthony and the house can tell us whether they intend to stay relatively continuous, or break with the recently re-established DNA,” she mused. “It remains to be seen how often a house can shift its core aesthetic without losing the customer’s understanding and belief.”