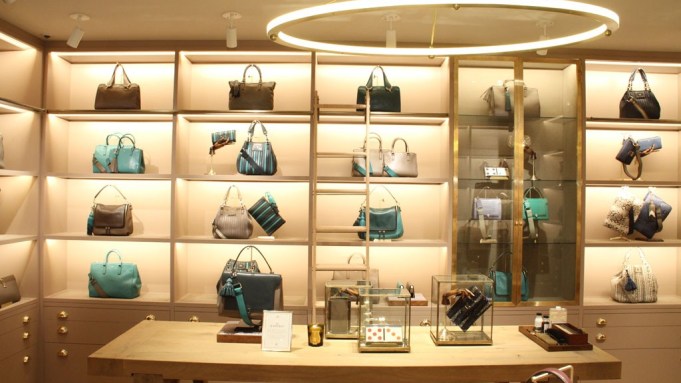 Anya Hindmarch is moving to Madison Avenue in Manhattan with a new store that’s all about art and craft.

The 2,000-square-foot store at 795 Madison Avenue, between 67th and 68th Streets, is the first to showcase the brand’s new retail concept, created by Ilse Crawford, and the first to house the designer’s seasonal collections and bespoke services.

Set for a soft opening today, the store, which replaces the brand’s unit on East 60th Street, will have its own British craftsman working upstairs on the Anya Hindmarch Bespoke collection, and interiors that recall the creative sprawl of an artist’s studio.

Fittingly for this proudly British accessories brand, the store sits in a space that was once the home of Paraphernalia, the Sixties shop that was synonymous with the London Look and drew customers such as Twiggy and Andy Warhol.

Hindmarch said the interiors were inspired by spaces ranging from the humble-but-chic Kettle’s Yard, a private home turned exhibition space for 20th century art and objects in Cambridge, England; the former Asprey store in London, with its higgledy-piggledy layout; the sculpture studio at the Royal Academy on Piccadilly, and the antique jeweler S.J. Phillips on Bond Street.

“I love the idea of a working space — craft is what is most exciting to me, and for this store I wanted the sense of a working area,” said Hindmarch from her office in the restored stable block of a former brewery in London’s Battersea.

Staff will be dressed in a uniform of belted brown tradesmen’s coats, while full-time leather craftsmen and embossers will be able to personalize accessories with handwritten messages and drawings. Hindmarch describes the chief craftsman, John Stalley, who is moving from London to New York, as the store’s resident celebrity.

“We need more and more craftsmen,” said Hindmarch. “It was clear to me when we launched Bespoke that people had become so disconnected from craftsmanship. Upstairs, we want the team to work with the customers, with help from the team in the U.K.”

The brand has refined its bow-shaped logo and redesigned its packaging. The former has been hand-drawn, and is meant to resemble a hallmark in silver, harking back to the early days of the brand. The latter has thick stripes bordered by narrow ones, and a clear plastic “postal” window for the name of the customer or a gift message.

As with her other retail outlets, Hindmarch said service will be paramount, right down to the way the shop assistants serve glasses of water: “I think there has been too much talk of the word ‘brand’ and not enough talk of the word ‘behavior.’ I think it is behavior that defines a brand,” said Hindmarch.

The spirit of the creative studio runs through the interiors with their raw wood floorboards, products displayed on trestle tables, workshop lighting and Anglepoise lamps and freestanding cabinets by the Danish designer Piet Hein.

There are wooden vitrines with brass details throughout the store, reflecting Hindmarch’s ongoing love of old haberdashery shops.

Upstairs, where bespoke is based, the focal point is a wall installation, what Hindmarch refers to as a “mash-up” of vintage 18th-century furniture. Anya Hindmarch Bespoke, which has its own store on Pont Street in London, has never before been shown under the same roof as the seasonal collections.

Hindmarch said she chose Crawford, whose past projects include Cecconi’s in London, Soho House in New York, and the Grand Hotel Stockholm, and whose warm, colorful interiors have a modernist feel to them, because she is a “strong woman,” and because of her talent in working in harmony with old architecture.

The company — which is owned by Hindmarch and a minority shareholder, Mayhoola for Investments, the private Qatari investor group that also owns Valentino — is in the early stages of a four-year strategic plan that aims to double the number of directly operated and franchised stores, put a sharper focus on core designs and the bespoke service and position the products alongside those by brands such as Stella McCartney, Céline, Bottega Veneta and Miu Miu.

Although the brand, which has worldwide retail sales of 45 million pounds, or $70 million, has been trading in North America for the past 15 years, Hindmarch said the opening of the flagship on Madison Avenue will be a major platform for “selective” expansion in the market through retail, wholesale and e-commerce.

“We see this store as a bit of a reentry into the U.S., we knew it had to be done properly, and we’re giving it the space it deserves,” she said. The company declined to give first-year sales projections for the store.

The brand also has a unit at 118 South Robertson Boulevard in Los Angeles, and in the past operated stores in New York’s SoHo and the Mall at Short Hills in Short Hills, N.J., which were eventually shuttered when their leases expired.

The plan is to double retail and wholesale distribution by 2016, with an eye to having more than 110 stores, both directly operated units and franchises, and some 240 luxury wholesale doors worldwide.

Anya Hindmarch sells through wholesale doors including Colette, Net-a-porter.com, Luisa via Roma, Stanley Korshak and Isetan, and has concessions in stores such as Harrods, Harvey Nichols and Liberty.

Earlier this year, the brand relaunched its e-commerce site, and in the fall will add innovative technology with the aim of “bringing to life” the bespoke offer, the company said.