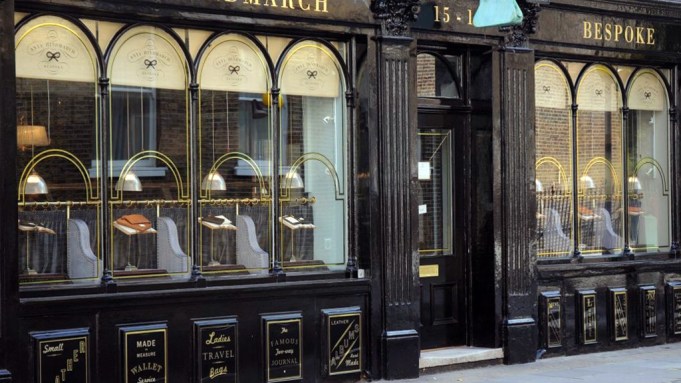 LONDON — Anya Hindmarch has always been one of the industry’s long-distance runners, and after 25 years in business, she’s changing the pace of her game.

Over the next four years, the designer — who counts Margaret Thatcher and Queen Elizabeth among her design inspirations — and her chief executive officer, James McArthur, plan to upgrade the business, fine-tune her brand positioning and boost her geographical reach.

“The strategy is simple: We’re going back to the basics of the brand,” said McArthur, a Gucci Group veteran and the former ceo of Balenciaga, during an interview with Hindmarch at the company’s headquarters in a former brewery in Battersea. McArthur said he sees the four-year plan as an opportunity to make an already healthy business — worldwide retail sales are 45 million pounds, or $71 million at current exchange — take flight.

“The brand resonated with its customers, and had done wonderful things. I wasn’t walking into a broken business. It’s been profitable for the past 25 years — a real tribute to Anya’s business skills. There were no licenses, and the brand has had an international presence for the past 20 years. Now, it’s about putting a match to the touch paper,” he said.

Last year, Hindmarch relinquished her role as ceo so that she could turn her full attention to the design and creative side. She brought in McArthur to run the business, although she remains the controlling shareholder and company chairman, as well as chief creative officer.

In early August, the company revealed it had taken on a new minority shareholder, a private Qatari investor group, in a deal valuing the Anya Hindmarch business at 70 million pounds, or $110 million. According to industry sources, the shareholder is Mayhoola for Investments — the same people who acquired Valentino Fashion Group last month.

Mayhoola replaced Kelso Place Asset Management LLP, which had held a minority stake in Anya Hindmarch since 2006. At the time Kelso bought its stake, the company was valued at 20 million pounds, or $37.7 million. A spokeswoman for Hindmarch declined to comment on the name of the new investor.

The four-year plan aims to double the number of directly operated and franchised stores, put a sharper focus on core designs and the bespoke service and firmly position the whimsical, feminine and very practical collection alongside French and Italian brands such as Celine, Chloé, Bottega Veneta and Miu Miu.

Hindmarch said she’s relieved to be able to spend “100 percent of my time on the product, vision and communication of the brand. It was time to demote myself from ceo and drive the business forward to the next stage. The key is to keep the energy and focus on the product.”

In February, the brand will open a 2,500-square-foot flagship in New York at 795 Madison Avenue, between 67th and 68th Streets, in what was formerly a Tanino Crisci store. “North America for us is virtually untouched, and the New York flagship is a critical step in our expansion. The U.S. is a huge opportunity,” said McArthur.

Hindmarch already has a store at 29 East 60th Street in Manhattan, which will be closed and replaced by the flagship. She also has a unit at 118 South Robertson Boulevard in Los Angeles. In the past, the brand operated units in New York’s SoHo and the Mall at Short Hills in Short Hills, N.J., which were eventually shuttered when their leases expired.

The new Madison location will be designed by Ilse Crawford, whose past projects include Cecconi’s in London, Soho House in New York and the Grand Hotel Stockholm. Hindmarch said Crawford’s brief will be to make the interiors “a bit more feminine” than they are now. Hindmarch’s stores are inspired by haberdasheries, with dark wood and vitrines.

Hindmarch is also taking a fresh look at the merchandise that will go into the new Crawford-designed stores. “They key was to look at what we really care about: the graphic shapes, the architectural inspirations, the signature bow and the brand’s sense of humor,” said Hindmarch, who is well known for her lively seasonal presentations in places such as an abandoned Underground station, a barge on the Thames and a working pub where she happily pulled pints and entertained press and friends for a few days. “We’ll get behind the key, recognizable shapes and drive them home.”

Those shapes include the Ebenezer, with its elegant Art Deco-ish stripes; the everyday Pimlico, with its long tassel zip, and the roomy Ebury, one of Hindmarch’s original designs for everyday. Another style that’s here to stay is the Maud clutch, which Princess Diana famously referred to as her “cleavage bag,” as she would often use it to cover her décolletage. The clutch also happens to be a favorite of the Duchess of Cambridge, who was most recently spotted carrying it at the Olympics’ closing ceremony.

As part of the new strategy, Hindmarch will focus on core leather goods and accessories and terminate her footwear and small ready-to-wear collections. The bespoke service, which has its own store on Pont Street in London and whose clientele is 40 percent male, will be increasingly integrated into the main collections. The idea is to offer bespoke services as the norm.

The brand is also making a major marketing push, increasing its spend by more than 50 percent this year, although Hindmarch declined to reveal the budget. It has hired KCD in New York to handle U.S. press, and is planning to stage its second show during London Fashion Week in September. The first was a highlight of London Fashion Week in February and featured mechanized versions of the bags and shoes singing, tapping and glittering as if they were in a Broadway musical.

The ad campaigns have returned to still-life photography, which highlights the architectural structure of the bags, emphasizing that the brand is more a perennial luxury product rather than a trendy, seasonal one.

Hindmarch and McArthur said they also want to ensure the brand has consistent positioning worldwide, alongside brands such as Celine, Bottega Veneta, Marc Jacobs and Chloé. In past years, it has been sold differently in various markets, alongside Michael Kors, Diane von Furstenberg and Marc by Marc Jacobs.

“In the past, there have been some disparities in brand positioning,” said McArthur. The average price point for the main collection is around 1,000 pounds, or $1,570, and McArthur said the brand is working actively with its partners to bring greater coherence to its positioning worldwide.

The new space in Harvey Nichols, a concession that opened in the spring, is an example of that strategy. Hindmarch is sold alongside Chloé, Balenciaga and Chanel Beauty on the ground floor. In late October, the brand will take over five of Selfridges’ Christmas windows, including those of the Wonder Room, and will fill them with the mechanized and light-up accessories from the February show. It will also open a pop-up shop at the store, adding to the concession it already has there.

In his bid to raise the bar at the back end of the business, McArthur has begun dealing with the same Florence-based sourcing and product development experts that he worked with at Gucci Group. “It means we’re able to play at the table with the massive brands,” he said.

The plan is to double retail and wholesale distribution by 2016, with an eye to having more than 110 stores, both directly operated units and franchises, and some 240 luxury wholesale doors worldwide. The brand sells through wholesale doors including Colette, Net-a-porter, Luisa via Roma, Stanley Korshak and Isetan and has concessions in stores such as Harrods, Harvey Nichols and Liberty.

Ed Burstell, managing director of Liberty, stocks the brand in the store’s new accessories hall. “I’ve been a fan of Anya’s for a while now, and I think the rest of the world is finally catching on to the fact that she is able to combine creativity with what a commercial collection needs to look like. She puts a lot of consideration and thought into creating her world, and the pieces will stand the test of time,” said Burstell, adding that the brand is one of Liberty’s top 10 performers, along with Loewe, Lanvin and Givenchy.

In addition to the Madison Avenue unit set for February, the brand opened a flagship in Aoyama in Tokyo last year and launched at Takashimaya in Singapore this month. It will launch at Harvey Nichols Kuwait in October as part of a franchise deal inked last year with the Qatar-based Al-Mana group for United Arab Emirates, Kuwait and Qatar. The Web site will be relaunched in the first quarter of next year. About 6 percent of sales come from the site, and McArthur said he’d like to see that increase to 15 to 20 percent.

The brand already generates 80 percent of revenue through its directly operated stores, the Web and franchised stores. The goal is to increase this to around 85 percent, with the remainder coming from wholesale accounts. Asia represents almost half of the business, and the U.K., about one-third. McArthur said that, over the next four years, he’d like to see the U.K. at 25 percent and Asia at 45 percent, with room for other regions such as North America, the Middle East, Korea and, eventually, China.

“We’re going to pause for the moment on China,” he said. “We’re in Hong Kong and Taiwan, but we’re not racing to the Mainland. I want to get what we have right, and then China will come.”

The same goes for entry into new product categories. “We won’t be rushing into fragrance and eyewear. We’ll wait for that. We’re working at breakneck pace, and we’re set to be a truly international brand,” he said.