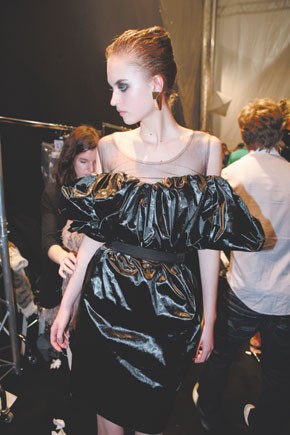 Topping the rankings for the first time, “Alber Elbaz made modern glamour look effortless in the beautiful fall collection he showed for Lanvin, which centered around all sorts of ribbons,” said WWD. He kept a dark scheme throughout, but inserted glittering Deco-inspired jewels to brighten up the runway.

With Baby Jane Holzer, Raquel Welch and Mrs. Robinson on his mind, John Galliano showed a glamorous, yet wearable, collection. There were chic furs, ladylike accessories and dresses done up in prints and flashy embroideries. Suits came in myriad colors, often worn with Stephen Jones’ hats.

The fairy tale Alexander McQueen spun on his runway revealed a breathtaking lineup. Inspired by a 600-year-old elm tree in his garden as well as a trip to India, the designer showed dark, Victorian Goth looks, like the black dresses over petticoats. Models wore dresses encrusted with jewels or under cutaway frock coats.

Nicolas Ghesquière delivered a darker, more mature fall — one that “was on-trend, yet light-years ahead of the pack,” said WWD. He showed dark, sultry pieces, and worked with everything from wool crepe to plastic and latex. Ghesquière sent out vibrant velvet tops and a lineup of imaginative dresses.

Marc Jacobs showed a collection full of structure. Stripped of decoration, his pieces consisted of cozy fabrics — blanket cashmeres and corduroy were in full effect. Zip-up coats and jackets were molded to torsos, while skirts revealed roller-coaster curves. And the bags? Ultrachic, clean shapes in embossed skins.

Karl Lagerfeld’s primary motif for Chanel’s fall was to work a curve, “which resulted in linear cutaway shapes such as jackets and coats that opened to show the pieces beneath, or dresses with a subtle capelike effect in back,” said WWD. He showed lean suits, frothed-up miniskirts, ribbed cozy knits and belted coats.

Following an hour-plus wait for John Galliano’s fall show, guests were treated to quite the production, as the venue was done up like an old movie set. Galliano sent out playful, colorful frocks, like the girlish dresses, as well as glam furs and a blue sweater coat with impressive embroidery.

Yves Saint Laurent’s girl is now bold, confident and ultrachic. Stefano Pilati “sent out an army of latter-day power women uniform in attitude and guise,” said WWD. He showed wool dresses with curved panels and sculptured jackets. Even when Pilati softened up, “restraint prevailed, as with a teal jersey dress.”

Riccardo Tisci looked to his trips to Latin America for fall and showed an elegant collection full of old-world conquistador style. Models emerged in gold-chain accessories, as well as sexy gypsy blouses and toreador-style jackets. Black lace and Moorish-jewel decorations accompanied the pieces as well.

Miuccia Prada’s take on fall for Miu Miu? Sporty. She showed variations on a sporty jumpsuit, like the zip-up sheath, a jacket over biker shorts and even a thermal onesie — all of which featured press-on monograms that could be the hot new trend. Accessories came in the form of galoshes and retro-looking bowling bags.

Stella McCartney’s fall runway was full of romantic, feminine pieces, like the bunched chiffon dresses and short, strapless lace frocks. She went big on her range of coats worn over fleecy boots, and with the sweater dresses embellished with shields.

Working with a palette mainly consisting of orange, copper and mauve, Olivier Theyskens sent out jackets over silk chiffon blouses, printed dresses, silk blazers and waistcoats. “Slim silhouettes were modern and arty in their slender curves, strongest in the endless array of gorgeous jackets,” noted WWD.

Dries Van Noten went heavy on prints for fall, after having traveled to Switzerland and Lyon, France, to scour the archives of the great fabric houses. He showed tunics over skirts or pants, sweaters with graphic constructions, serenely shaped column dresses, tailored jackets and aged-looking furs.

Alessandra Facchinetti turned out her first-ever collection for Valentino — and it’s likely to please fans, especially the younger set. She played with recurring motifs, like the ribbon-swirl rosettes and pleat-front skirts. Coats and dresses were standouts, as were the white Sixties-ish coat and those signature red evening gowns.

Declaring their fall collection “a glamorous protest,” Viktor Horsting and Rolf Snoeren sent out looks screaming the words “No” and “Dream On.” The messages were delivered on a gray flannel coat, a T-shirt, even down one sleeve of a jacket. Flashes of color stood out in a slick red sheath and a wine chemise.

Yohji Yamamoto, who played the guitar while featuring his fall collection, worked in beautifully complicated cuts, volumized skirts and wool jerseys. Other hits were the tweed jackets nipped at the waist, the chic coats and the new Yohji bag — an oversize, shoulder-strap affair that he designed in collaboration with Hermès.