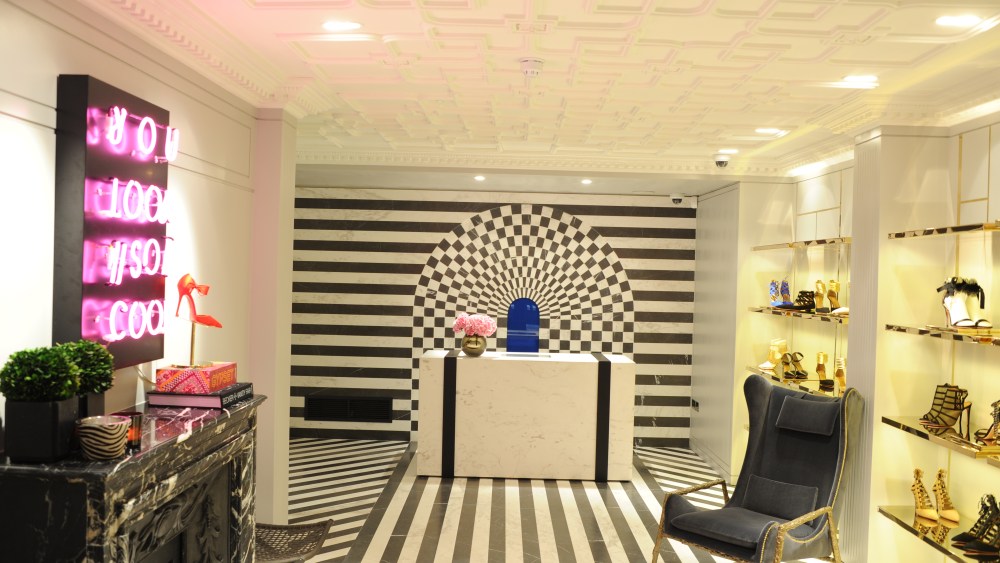 BODY AND SPIRIT: Aquazzura is the latest fashion label to land on London’s Albemarle Street, and its cofounder and creative director Edgardo Osorio is fully honoring the area’s artistic origins.

This is the second stand-alone store for the red-hot footwear brand, which Osorio cofounded in 2011 with his business partner Ricardo D’Almeida Figueiredo.

The new unit is midcentury-modern-meets-Florentine-Gothic. Not surprising for a brand based in Florence.

The back wall of the store is done in gray and white striped marble, reminiscent of the altar in a Tuscan church, while shoes rest on black-and-white striped plinths. Floating brass shelves are set into the original Georgian alcoves.

The store, at 38 Albemarle Street, spans 1,728 square feet and the space was a former art gallery. In a nod to history — and to Osorio’s passions — it will have a revolving display of contemporary art.

Created by Portuguese interior designers Cláudia and Catarina Soares Pereira, it features midcentury modern furniture as well as a vintage marble fireplace and moldings that echo the building’s Georgian architecture.

The door handles are in the shape of pineapples, the Aquazzura logo, and a symbol of good luck that appears on the bottom of every shoe.

“Every store will be different, and take its inspiration from each city — it’s about mixing elements, and it means that every one feels like a different home,” said Osorio, whose first store is located the 15th-century Palazzo Corsini, on the banks of the Arno in Florence. “It’s nice to surprise people, too.”

The London store will carry couture boots covered in peacock and other feathers, all of which are hand-applied. As of November, it will also add a bridal collection and a made-to-order service.

There are more new stores on the horizon, including a New York unit, on Madison Ave and 74th Street, that’s set to open in March opposite the new Apple store; and a pop-up in Bal Harbour, Miami in November.

Units are also planned for Macau, Dubai and Hong Kong next year. The brand is stocked at more than 180 retailers, including Harvey Nichols, Harrods and Selfridges.