The design duo is wishing the brand a happy 20th birthday with a one-off capsule collection that will bow during Milan Fashion Week. 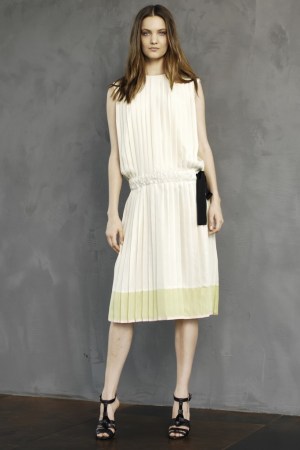 MILAN — Design duo Tommaso Aquilano and Roberto Rimondi are wishing Piazza Sempione a happy 20th birthday with a one -off capsule collection that will bow during Milan Fashion Week in September.

The collaboration was spurred by the duo’s long admiration for the brand, which was founded in 1991, and their longstanding friendship with Piazza Sempione’s chief executive officer Enrico Morra.

For the occasion, the former 6267 and Gianfranco Ferre designers applied their tailoring expertise, eye for color, craftsmanship and love of Italian fabrics to create a 50-piece collection that revisits Piazza Sempione staples and sartorial heritage.

“It’s about around-the-clock elegance. The idea was to highlight Piazza Sempione’s history with essential cuts, easy-to-wear pieces and a sophisticated-yet-contemporary mood,” said Aquilano, scouring through the racks during an exclusive walkthrough in Piazza Sempione’s showroom.

The line’s soft and polished feel is obtained via washed silks and a silk and polyester blend that are used in draped dresses and camisoles, often traced with black piping, or fluid trousers and short skirts with paper bag waistlines. Rather than employing stretch materials, one of the brand’s building blocks, the designers created accordion pleated elongated jackets and drop-waist shifts.

A print featuring the juxtaposition of floral and lace motifs in shades of gray and yellow brings a whiff of the Fifties, especially in the shirt-over-capri-pants combination.

Colors span from black and cream to sherbet hues such as apple green, Bellini pink and lime yellow, often combined on one garment.

According to Morra, although the designers dipped into the archives, the collection is forward-looking while being faithful to the house’s codes. “Piazza Sempione has a very loyal clientele that I think will really appreciate this project,” said Morra. “We believe in constantly renovating our core business, which is based on substance and not just marketing, and in a growth anchored on evolution.”

The collaboration is just part of Piazza Sempione’s plans, which include launching e-commerce and growing the accessories division.

In line with company policy, Morra declined to disclose sales but according to analysts, Piazza Sempione likely posted wholesale revenues of about $75 million in 2010. With retail turnover up 18.5 percent in 2010 versus the previous year, the U.S. continues to be a top-performing market for Piazza Sempione, which operates six stores in cities such as Chicago, Las Vegas and Philadelphia. The line is also available at department stores including Neiman Marcus, Saks Fifth Avenue and Bergdorf Goodman.

In the rest of the world, wholesale revenues advanced 28.5 percent. Piazza Sempione is carried in 500 doors worldwide and is further broadening its horizons with direct openings in Shanghai and Taiwan by yearend.

Named after the square where it was originally located, Piazza Sempione was founded by Roberto Monti and Marisa Guerrizio, a husband-and-wife team who departed the company shortly after they sold it to L Capital, the private equity arm of LVMH Moët Hennessy Louis Vuitton, in 2006.