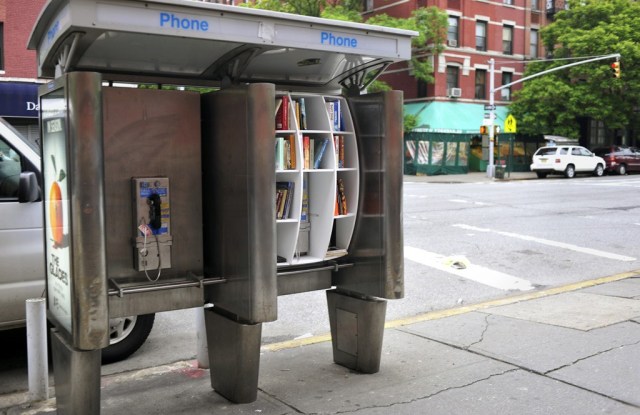 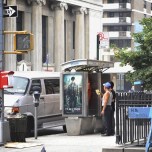 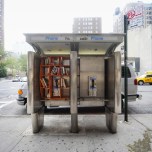 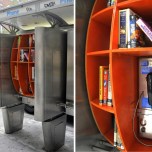 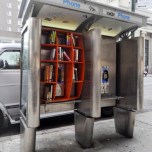 New York City-based architect John Locke is redefining what it means to be book smart.

As part of his Department of Urban Betterment project, Locke is installing free books in streetside phone booths. The idea for such repurposing first struck him during his daily mile-long walks to and from Columbia University, where he teaches “Hacking the Urban Experience.” En route, he would typically see 20 phone booths in each direction. “Being trained as an architect, we’re taught we can do good things for the city and for the people. A big part of that is trying to find opportunities and problems that we can answer,” he said.

Through a little research, Locke learned that in 2007 New York City earned three times as much from the advertising on phone booths than it did from the actual phone calls. “And that was five years ago,” Locke said.

After deciding seeking approval from city officials would only slow him down, he installed his first book stop at West 102nd Street and Amsterdam Avenue, but the 35 books were wiped out within a day and the orange shelves were gone 24 hours after that. Locke soon set up another one at West 96th Street and Amsterdam, which lasted for six weeks. A third Upper West Side location is being mapped out and an Astoria, Queens, one is in the works, thanks to a stranger who e-mailed Locke to let him know Seaburn Bookstore, the only independent bookseller in Astoria, had closed.

Initially, Locke placed a book donation box in the lobby of his Upper West Side apartment, but now a number of booksellers have offered freebies. “I’ve heard from libraries in Maine and in the Northwest. People have been really great. I won’t have to worry about books for a while,” he said.

The aim is to have people take a book and replace it with one of their own, though Locke is uncertain about how much direction he should give. A friend has suggested painting the spines of the books yellow, as a nod to the free yellow bikes that are available for public use in certain cities.

Locke, who grew up in Texas, has been contacted by people in Los Angeles, Boston and other cities who would like to set up book booths there. When not tied up with his full-time job at a Tribeca architecture firm, the 31-year-old is trying to sort out how his concept might be funded, adopted in other places and perhaps expanded to other underused public spaces, like bus stops. Kickstarter and the National Endowment for the Arts are two likely choices to bankroll the project, he said.

As of now, it’s a pretty bare-bones operation. “I was painting them [the shelves] with spray paint but I decided that wasn’t the best idea. It’s basically a sheet of plywood, which is about 20 bucks at Home Depot. The big cost is paying someone to cut the plywood to fit the shelves. My goal is to get it under $50,” Locke said.