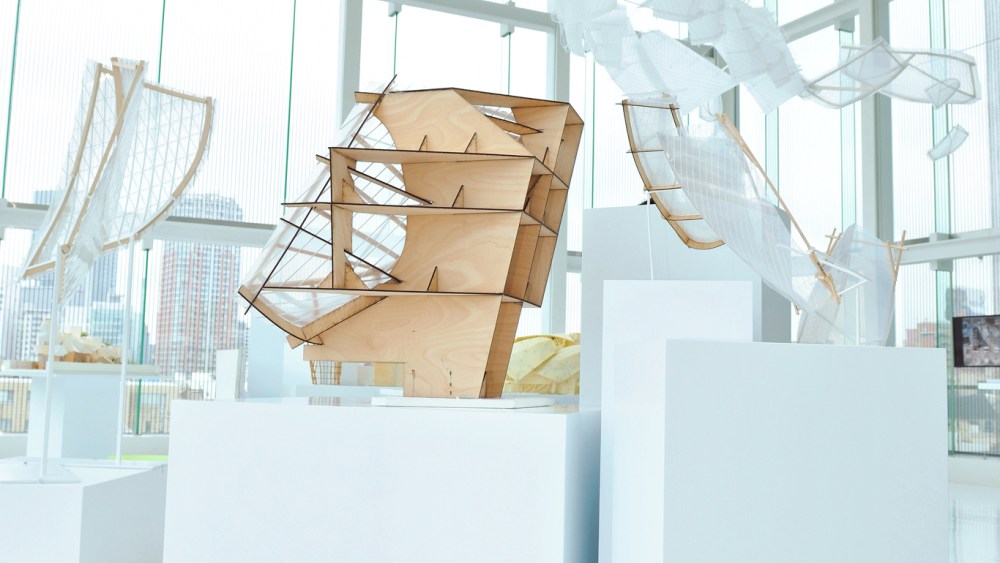 TOKYO — Bernard Arnault tapped Frank Gehry to realize his dream of opening a massive Fondation Louis Vuitton museum in Paris last year. Now the two men — giants in their respective fields of luxury goods and architecture — are gearing up for a sequel of sorts.

The LVMH Moët Hennessy Louis Vuitton’s chairman and chief executive officer revealed Friday that Gehry, widely considered the world’s most famous living architect, is planning to design “something” for the Fondation Louis Vuitton in Seoul. A spokeswoman later categorized the project as an “arts space.” Arnault, in Tokyo along with Gehry to commemorate the opening of two exhibitions dedicated to the architect’s work, estimated that the project will take roughly three to four years to complete.

“We are preparing something with Frank in Seoul,” Arnault told WWD during an interview at the airy, luminous exhibition space above the Louis Vuitton Omotesando store. “It will be different, but it will be something also of great interest I think, done with him. It will be different from the aesthetic of [the Paris museum] but with his aesthetic. But I cannot say more.”

Gehry also declined to give further details on the Seoul project — his publicist was quick to shoot down a question about it. But the 86-year-old architect, nursing a back injury and traveling to Tokyo against his doctor’s orders, was willing to talk about his close relationship with Arnault, the French executive’s wife, pianist Hélène Mercier, and Arnault’s artistic adviser Jean-Paul Claverie.

“We’ve all become really good friends. Arnault with his wife, she’s a musician and I’m crazy about classical music and so we have a lot to talk about besides his great collection, his art, his curiosity about art. So I like being with [them],” he said.

Arnault and Gehry made the trip to Tokyo to mark the opening of two exhibitions that trace the career of the Los Angeles-based architect.

The Fondation Louis Vuitton exhibition, which made previous stops in Paris and Beijing, traces the genesis of the Paris museum and features sketches and several 3-D models of the building, composed of massive glass sails. It runs at Espace Culturel Louis Vuitton through Jan. 31. Meanwhile, Issey Miyake’s 21-21 Design Sight museum at Tokyo midtown is hosting a larger exhibition dedicated to Gehry’s entire body of work — including the Guggenheim Museum Bilbao and the Walt Disney Concert Hall in Los Angeles — and the organic forms and shapes that inspire him. It will be in place until Feb. 7.

The French luxury goods titan expressed both an intense personal interest in architecture – Arnault has a background in engineering – and his sense of its importance to his company and society at large.

“In architecture you have geniuses like Frank and I think it is fantastic to be able to work with him,” he said. “I think architecture is evolving and you have more and more interesting projects and obviously it’s more and more relevant to modern life.”

Beyond the aforementioned arts space in Seoul, LVMH has other architecturally noteworthy projects in the pipeline. Namely, the group is renovating its La Samaritaine department store in Paris and teaming with Japanese real estate developers to build what Arnault calls a “gigantic” new retail/office complex in Tokyo on the site of the old Matsuzakaya Ginza department store. Together the investors are pumping 83 billion yen, or about $800 million, into the Ginza initiative.

Coincidentally, the Samaritaine and Ginza initiatives are enlisting the help of Japanese architects. Kazuyo Sejima and Ryue Nishizawa of SANAA, who designed the Dior Omotesando store, are tackling Samaritaine. Yoshio Taniguchi, who designed the Museum of Modern Art in New York, is handling Ginza.

“It will be more classical because you know it is just a block, a gigantic block here in Tokyo. I think it will be beautiful,” Arnault said, adding that the project took shape about four or five years ago.

The executive declined to give numbers, but said business in Japan is doing very well, thanks in part to tourist flows to the country. “We believe very strongly in Japan, we invest a lot in Japan. We are not here for a temporary period, we are here forever,” he said.

LVMH has had a busy week here — on Thursday night its bespoke men’s shoe brand Berluti held a dinner and shoe-polishing class for its top clients.

Antoine Arnault, Bernard Arnault’s son and ceo of Berluti, said the brand is performing strongly in Japan. He said that while business has slowed in China, Chinese tourist flows to Japan have compensated. He added that globally the brand is growing at a double-digit clip.

Gehry also spoke enthusiastically about his love of Japan from a design point of view. When asked about his view of Japanese aesthetics, he shot back: “Wow, that’ll take an hour.” He went on to discuss his days as an architecture student, explaining that his teachers had just returned from Japan where they had observed the wooden shrines and building.

“We were building tract houses at that time in the Fifties, so there were miles of tract houses with wooden frame structures and I thought it was so Japanese in a way,” he said. “There are a lot of California bungalows that have wood and the roofing wraps over – like around the edge like the temples here. And so it was very seductive. It was available. You could use those materials and build quickly…it was very user-friendly and people loved living in them, which is the most important thing.”

Gehry went on to explain how he connects with Japanese culture both here and at home in Los Angeles.

“I’ve always come back to Japan and I go searching out the temples and I’ve gotten to know a lot of the historians and befriended [Joe D. Price and Etsuko Price] who have a big collection of Edo period screens in L.A. and I go to their house once a year and they bring 10 out. I only get to see 10 and then we go and drink sake,” he said.

Gehry has a reputation for being outspoken and dropping the odd profanity now and then. Last year at a press conference in Spain, he made headlines for flipping the bird at a journalist and saying: “In this world we are living in, 98 percent of everything that is built and designed today is pure s–t.”

Speaking to WWD, the architect kept his language G-rated, but managed to take a few swipes at the state of modern urban development.

“The built environment is not illustrative of any attempt to be human or pleasurable or for people. It’s just — I don’t know what it is about. The most bang for the buck or something and we’ve proved that you can build with their budgets, with the guys that do those buildings. We can build architecture with those budgets. Proven it time and time again,” he said. “We have developed a computer program and a process that allows us to guard against excessive changes and waste so there’s no excuse for building these faceless buildings. The only problem is, nobody complains.”

Gehry explained that he does use technology for certain aspects of his work, but he expressed disdain for computer-generated design. Both exhibitions in Tokyo showcase numerous models for Gehry’s buildings incorporating items like wooden blocks, sheets of plastic and scraps of fabric.