The singer wears Area's crystal-embellished puffer jacket in her "In My Head" video, cementing a banner year for the cult fashion label.

PARIS — Few brands can boast of dressing celebrities as diverse as Michelle Obama and Katy Perry. With Tuesday’s release of Ariana Grande’s “In My Head” video, cult New York-based label Area received another major endorsement, in a year that has seen its profile soar and Instagram following break through the 100,000 barrier.

In the clip, produced by U.S. Vogue to accompany the singer’s August issue cover shoot, Grande dances and struts around a bare room wearing a $950 cropped puffer jacket in technical duchess satin with the brand’s signature crystal trim, paired with a matching skirt and glossy, black thigh-high boots.

Launched in 2014 by design duo Beckett Fogg and Piotrek Panszczyk, who met at Parsons School of Design, Area has made a name for itself with a quirky take on glamour that combines the high gloss of a Seventies fashion magazine with a distinctly Millennial embrace of inclusivity.

“Our brand is all about glamour and really the polarizing idea of what that could be. What interests us about it is that it’s very diverse for everyone in the world,” Panszczyk said during the brand’s recent resort presentation in Paris.

“We don’t really care if it’s Gucci Mane’s wife, Keyshia Ka’oir, or it’s Michelle Obama, we want them both to feel amazing. We’re not there to judge you or say anything about who you are, where you went to school or who your parents are, because I kind of feel like, that’s just not really how the world works anymore,” he explained. 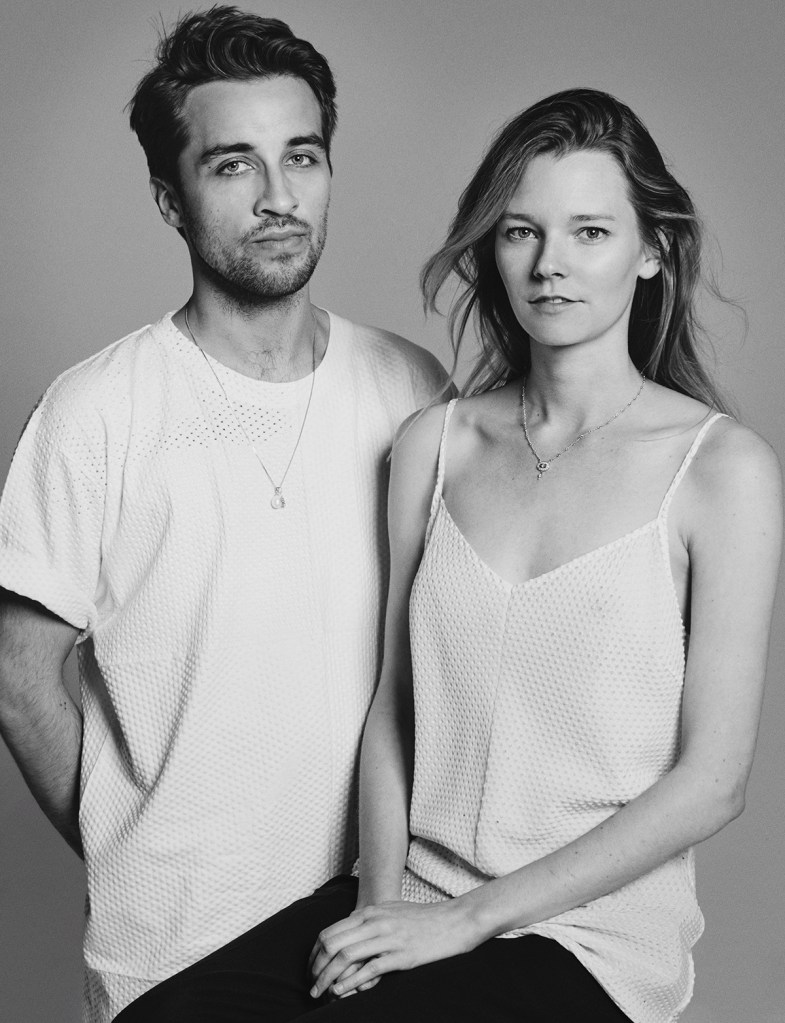 The crystal trim, a marker of faux fabulousness if ever there was one, appeared throughout the resort collection — as embellishment on bodysuits printed with vintage jewelry ads, or woven into cozy cable knits. It also extended to accessories such as playful metallic slingback heels dripping with chandelier crystal fringe.

“Everything that we do, we really try to make it a special object. We want people to get our stuff not on sale. We want you to walk in and kind of be wowed and have an emotional connection to it,” said Panszczyk.

Women can buy into the brand through its $275 crystal hoop earrings and graduate to higher-end goods such as the $1,595 crystal-fringed Ling Ling bag, produced with Italian leather goods maker Bertoni — the style that Kendall Jenner flaunted at Coachella in April, in a group shot that also included Virgil Abloh and Gigi Hadid.

Coming after Perry wore a custom Area outfit for her Coachella performance, the endorsement helped propel the label to the position of third highest-ranked fashion brand in earned media value at the festival, behind Revolve and Fashion Nova, according to influencer marketing data software firm InfluencerDB.

Unlike those huge fast-fashion firms, Area has never paid for a post, making the achievement all the more remarkable.

“Obviously, we understand that Coachella is important. It’s an important fashion moment, but we were not really plotting to do something major,” Panszczyk recalled. The Jenner post, he said, was “this funny real moment that also looked so fake, in a way. That basically went super viral.” 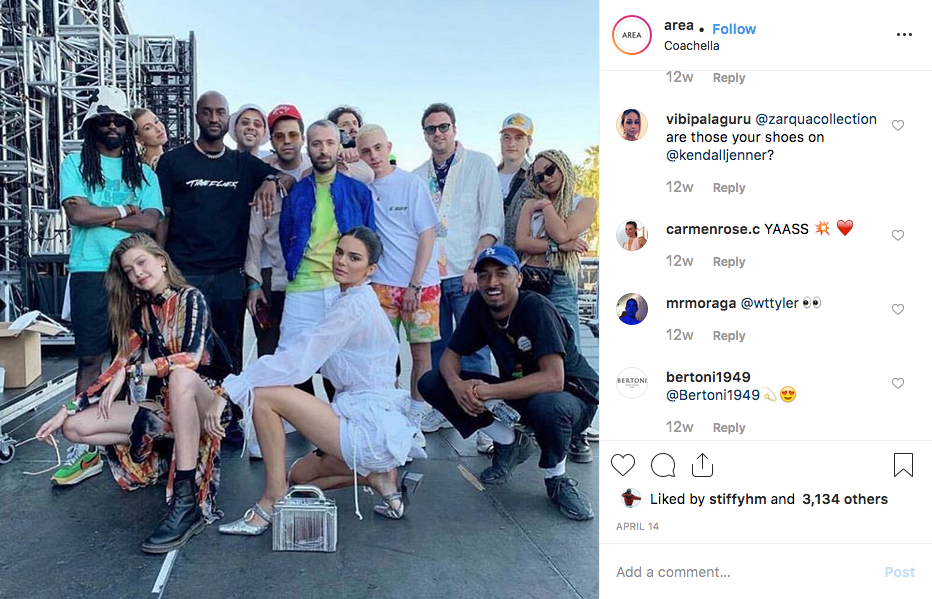 Then again, celebrities have been a part of the brand’s narrative almost since the beginning. “When we started five years ago, I feel like that was a very pivotal time for the Internet and what was going on and how we even were perceiving celebrity,” he said.

“The first time it happened was when, all of a sudden, Bella Hadid wore a lamé dress to the after party of the Met Gala. That kind of really started a snowball effect,” he continued.

“Sometimes if you even look at our Instagram page, it can be amazing editorials from Vogue Paris and Vogue U.S., but then all of a sudden, you have a block of celebrity and you’re not sure if you’re on the Daily Mail or not. I kind of feel like that started fueling it all,” Panszczyk remarked.

The brand’s social media might feature shots of Dua Lipa in the crystal-trimmed bodysuit she wore for her performance with South Korean girl group Blackpink, back to back with images of Obama in a custom Area crystal-trimmed blazer on the Toronto leg of her “Becoming” book tour.

“It meant so much for us, saleswise, when for instance a Kylie Jenner could wear something. We really saw immediately how it sold out, so it kind of became a part of our story, our dialogue. Like, what is the beauty of paparazzi? Why are people so obsessed with these ‘It’ girls? And we kind of started mimicking these notions,” he said.

Both Fogg, who comes from Lexington, Ky., and Panszczyk, who was born in Poland and grew up in the Netherlands, feel an affinity with what might be considered an outsider’s take on glamour, which informs their eccentric, DIY-tinged aesthetic.

“We love playing with this idea of cheap and chic, what is done and what is not. It reminds us also of back home. For instance, when my mom was living in Communist Poland, they didn’t really have access to it, but they were all so sophisticated. Russian women were the same. They were all doing it by themselves,” Panszczyk noted.

“We have all these aspiring ‘It’ girls that also buy into it. I don’t know, it’s kind of like a nice range of people that all aspire to be something that they’re maybe not really,” he said. 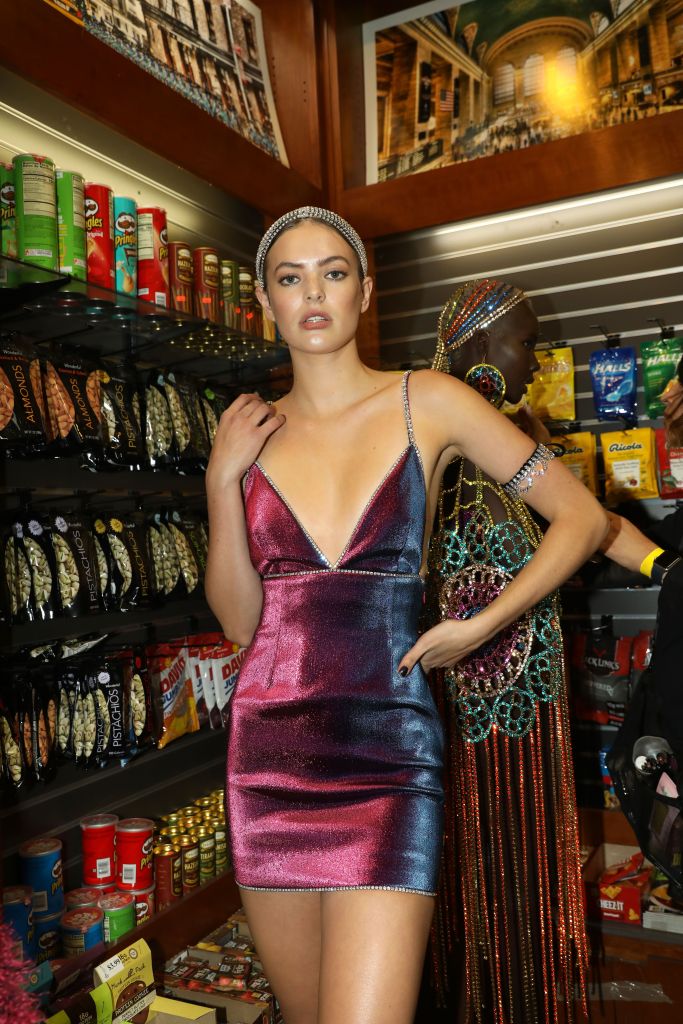 Area’s colorful lamé minidresses are popular for special occasions — so much so that they are referred to internally as “birthday” dresses — while older women might layer a crystal mesh dress over a caftan, like full-body jewelry, he explained.

“We don’t want everyone to think that they have to look like Kendall Jenner or Beyoncé or all these women, so in that range, we kind of build on new silhouettes, build on new hemlines, but still with that same energy, evoking that same nonchalant sexiness,” Panszczyk said.

“We have a very petite client, we have a bigger client and everything in between, and it’s the same with skin colors,” he noted. “So for us it’s always important to look at everyone and learn from each other: How would you wear this?”

It’s especially important to the designers that women enjoy their creations, because at the end of the day, word of mouth is the real foundation of the label, which is sold online as well as through retailers including Barneys New York, Opening Ceremony and Browns.

“Exclusivity for us is more about being super open-minded, being open to really learning from other cultures and people, and pushing that into luxury, instead of being snobby about it,” Panszczyk explained.

“I even had people telling me that they really felt good and special while they were wearing it, so it’s really about playing with that idea of, ‘What does it mean to feel this glamorous, this important?’” he added. “It’s really about your personality and getting that out there, and how can we complement that?”