The women’s-only retail concept is located in a 4,850-square-foot unit on Avenue Montaigne, the brand's seventh location in the city.

By Miles Socha and Joelle Diderich on January 22, 2013
View Slideshow 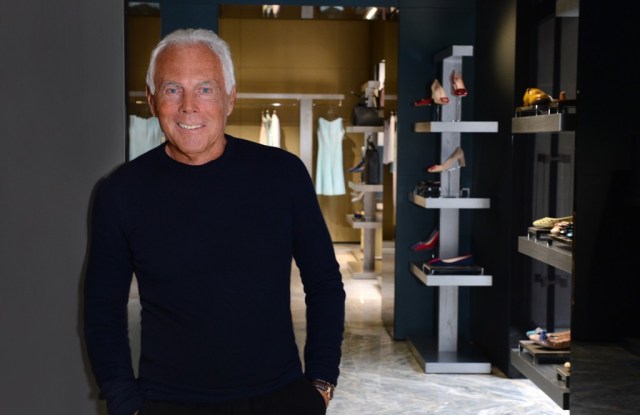 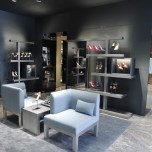 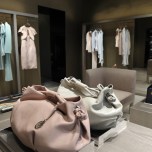 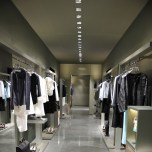 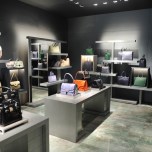 PARIS — Upping the luxury ante on Avenue Montaigne, Giorgio Armani has unveiled a new women’s-only retail concept in the midst of couture week.

“I’ve had enough of all those metallic things. I really wanted to bring it back to something more natural, more human, and to create a boutique where the product is the real star,” Armani said. “This is the new luxury — discreet.”

Located in a space previously occupied by Emanuel Ungaro, with whom Armani worked briefly in 1974, the unit boasts the Italian designer’s first retail showcase for couture accessories, set off by a dark, Alpine marble floor that glints with iridescent blue.

Armani is to parade his spring Armani Privé collection today and host a cocktail party in the store a few hours later. He has cited couture accessories as a growth vector for the company.

During a walk-through with WWD on Sunday, the Italian designer demonstrated his hands-on approach to the business, stopping midsentence to move a pump from a high shelf to eye level, or removing a handbag displayed in duplicate.

He’s also tinkering with the retail rule book. He noted that the boutique is mannequin free, with clothes hung sparsely on racks, only one size of each style displayed.

He pawed through a section to illustrate a more animated and engaging approach to shopping than looking at static displays.

Working within the site’s thick, load-bearing walls, Armani arranged the store into a series of interconnected rooms, like a Parisian apartment, appointing each with a distinct color palette: petrol blue for ready-to-wear, a silvery gray for more evening styles. Fixtures, with only touches of chrome, match the silky walls.

Accessories are sprinkled throughout, but are also showcased front and center at the two entrances: handbags for one; shoes for the other.

Armani said he went for understated luxury “because I didn’t want to contrast too much with the period buildings one finds on the street.”

The designer now has two Giorgio Armani boutiques on Montaigne. The 4,500-square-foot location at 18 Avenue Montaigne, which opened in 2007, will now be dedicated to the men’s collection.

Armani’s new store kicks off a year of transformation for broad, tree-lined Montaigne, with new or refurbished boutiques under construction for a host of luxury brands, including Saint Laurent, Fendi, Loewe, Versace and Chanel fine jewelry.

Armani now has seven boutiques in the French capital, having added an Emporio Armani unit on Rue Saint-Honoré last year.

He noted he is in the midst of sprucing up the Collezioni boutique on nearby Avenue George V, and expressed ambitions to add a shop for Armani Jeans in Paris, plus another store for the Giorgio Armani brand, ideally on the Rue du Faubourg Saint-Honoré.

“In each city, you need to be on different fashion streets,” he said.