Giorgio Armani offered a prelude to the celebrations of his 40th anniversary during a presentation of his latest Casa collection Tuesday during the international Salone del Mobile furniture and design fair here. 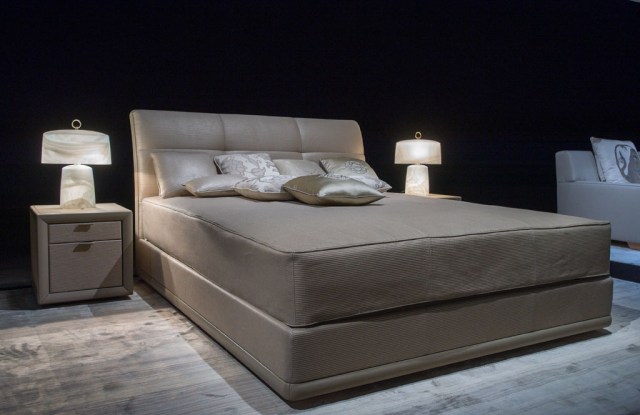 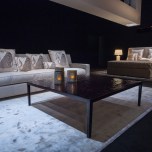 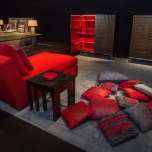 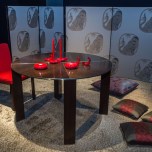 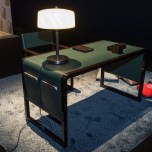 MILAN — Giorgio Armani offered a prelude to the celebrations of his 40th anniversary during a presentation of his latest Casa collection Tuesday during the international Salone del Mobile furniture and design fair here.

Armani’s Justin Desk, for example, is produced in a limited edition of 40 numbered pieces with double top and drawers in aqua leather and a gray Japanese tamo ash wood. “This is an invitation to take the time to think, write and gather one’s thoughts,” said the designer during a walk-through at his Tadao Ando-designed theater.

Earlier in the morning, Armani was spotted monitoring the work on the new Silos structure outside his theater, an exhibition space that will display pieces from the designer’s collections from the past 40 years and which is expected to open on April 30. Armani, who is investing 50 million euros, or $53 million at current exchange in the Silos project, said Tuesday that around 800 designs will be housed in the space. A runway show will be held the evening of April 30, but the designer said he is still evaluating what collection will be shown.

To further mark the evolution of his career, Armani dedicated one section of the theater to his interior design projects over the past decade, whose progress he felt “had not been narrated yet.” The exhibition, called “The dream of living according to Giorgio Armani,” lays out a range of sketches, renderings, scale models, digital photos and material samples of the most important projects developed by the Armani/Casa Interior Design Studio around the globe, spanning from residences in Manila, Miami, Istanbul and Tel Aviv to the designer’s hotels in Dubai and Milan, and collaborations with top architects ranging from Daniel Libeskind, present at the Salone event, to César Pelli. “People think I design clothes, maybe they don’t think or know that I can do this,” Armani said. “This is a big commitment for me, I spend a lot of time on these projects,” said the notoriously hands-on designer.

When the Salone wraps up on Sunday, the exhibition will move to the Armani Casa store in Milan’s Via Sant’Andrea, a few steps away from the newly renovated Giorgio Armani flagship on Via Montenapoleone, which now also displays pieces from the brand’s home line.

Asked about any upcoming hotels, Armani revealed he is now working on “a huge resort on a Chinese island,” but declined to provide details as the agreement has not been finalized.

Armani’s goal is to present “reassuring and long-lasting” furniture that will stand the test of time and “not be classifiable in one period.”

Details from the Forties and Fifties continue to be key inspirations for Armani, as well as Oriental touches that also pepper the latest collection. “There are elements of faraway countries where the atmospheres tend to weaken now, so this is a way to remember them for the next generations,” Armani said.

For example, there are Japanese lanterns made in Murano glass; Asian and Chinese graphics and patterns on decorative pillows, and a bar cabinet with an embossed, braided-texture lacquer finish in bronze with a red lacquer pull-out top and drawer. Armani pointed to an oversize walnut table he owns himself. “I adore walnut, the wood and the tree, strong, robust and imposing,” said the designer. An emerald-green pony hair sofa is also a standout. “This is an object of desire — it’s a collection made up of [special] items,” Armani said.

Asked if he believes in mixing and matching pieces of furniture — along the same lines of fashion — Armani responded in the affirmative. “Yes, of course. You can’t have an all-around-Chinese home,” he said with a chuckle.