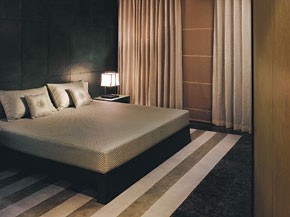 MILAN — Giorgio Armani and Emaar Properties have provided a preview of what the first Armani hotel will look like.

The first Armani Hotel and Residences is expected to open at Burj Dubai in 2009. “I feel enthusiasm, curiosity and high expectations all around the world,” said the designer.

Designs for the project are being shown this week at the Arabian Travel Market in Dubai.

As per the 2005 agreement with Emaar, in addition to Dubai, other hotels are slated for Milan and Marrakech and subsequently in other destinations such as New York, Shanghai and London.

The Armani Hotels and Resorts pavilion at the ATM was designed in an oval shape with three mock-doors that preview the first three Armani destinations — Dubai, Milan and Marrakech. The preview is a visual and tactile experience through the use of sophisticated colors, textures, shapes, materials and styles.

The Armani Hotel in Burj Dubai will comprise 160 guest rooms and suites, restaurants and a spa, covering more than 432,000 square feet. The hotel, as well as the 144 exclusive Armani Residences, will be decorated with exclusive Armani Casa home furnishings.