The French business titan is making an investment in the fledgling business of the 27-year-old French wunderkind. 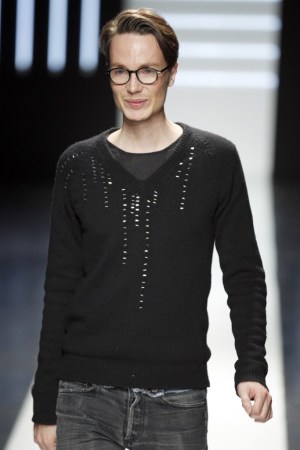 PARIS — Bernard Arnault is making an investment in the fledgling business of Maxime Simoens, a 27-year-old French wunderkind who had recently been courted by Christian Dior, industry sources said.

The last time Arnault made an investment in a smaller fashion firm was in 2009, when LVMH bought a 49 percent stake in Edun, the socially conscious clothing label founded in 2005 by U2 rocker Bono and his wife, Ali Hewson.

Details on the size of the investment in Simoens, and the precise vehicle involved, could not be learned.

An investment in Simoens would suggest Arnault is keen to keep tabs on young talent.

“They do believe in him, and want to finance him,” said one source, suggesting the French group wishes to forge ties with promising designers who could one day take on its bigger brands, which range from Emilio Pucci and Givenchy to Louis Vuitton.

Dior, which recently named Raf Simons its new creative director of women’s haute couture, ready-to-wear and accessories, is said to have conducted talks with Simoens in recent months as it sought a successor to disgraced couturier John Galliano.

Simoens has repeatedly denied to WWD he has had any contact with Dior.

Simoens has a signature rtw line he shows during the Paris couture schedule. Celebrity fans of his sexy and graphic dresses include actresses Mélanie Laurent, Rachel McAdams and Astrid Bergès-Frisbey.

Born in Lille, Simoens studied applied arts in Lyon and then fashion at the Ecole de la Chambre Syndicale de la Haute Couture. After graduating in 2005, he worked for designers including Elie Saab, Jean Paul Gaultier and Nicholas Ghesquière at Balenciaga. He also did a stint beside Galliano at Dior, according to his Web site.

The Maxime Simoens collection is carried by such stores as Montaigne Market and Frank & Fils in Paris.

Earlier this month, Simoens and French fashion house Leonard confirmed a WWD report they would be parting ways after a one-season collaboration.

At the time, Simoens noted the separation from Leonard would leave him “free to concentrate on new projects.”