A book, “Robert Winthrop Chanler: Discovering the Fantastic," is the first new tome about his work in 80 years. 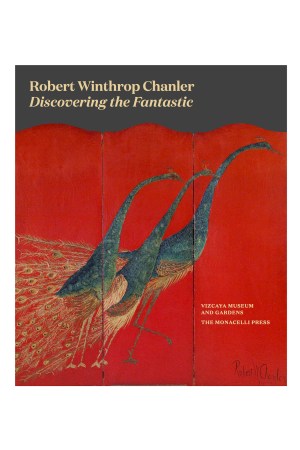 He was a tall, striking man from an aristocratic family who achieved fame as an artist early in the 20th century but who has dropped off the cultural radar since his death in 1930.

Self-described “interior decorator” Robert Winthrop Chanler, born in 1872, was a man of great gifts and great contradictions. He was a scion of some of the oldest families in New York, a descendant of 17th-century governor-general Peter Stuyvesant of what was then New Amsterdam, and a member of the group of 10 children known as the Astor Orphans. His mother, Margaret Astor Ward, and father, John Winthrop Chanler, died within two years of each other, 1875 and 1877, respectively, and he and his nine siblings were raised at the family estate, Rokeby, in Barrytown, N.Y.

But Chanler’s work was avant-garde in its time and still stands out as extraordinarily exotic. He created a variety of commissioned pieces that included fantastical mash-ups of birds, animals and human beings, which and who would never have existed in the same place at the same time. His screens and paintings were a linchpin of New York’s celebrated 1913 Armory Show, which introduced American audiences to modern art, but had been largely forgotten until 2013, when the New-York Historical Society presented a centenary exhibition on the Armory Show. The exhibition included his screen “Leopard and Deer (Death of the White Hart)” and his painting, “Parody of the Fauves.”

Chanler had a strong personality and he lived in a double-wide town house on East 19th Street in Manhattan that he called The House of Fantasy. There he would hold wild, boozy parties, which often culminated in late-night portrait sessions. His second wife was the opera singer Lina Cavalieri, known as the most beautiful woman in the world, who left him after their honeymoon. The problem for Chanler was that, before marrying her, he had signed an extraordinary prenuptial agreement that gave her the rights to most of his money and property if the marriage dissolved. On learning of this, one of his brothers, who had mental-health problems, wired him the question, “Who’s looney now?”

The Astor lawyers were eventually able to breach the agreement, and although Cavalieri, the inspiration for the extraordinary profiles of women on Italian ceramicist Piero Fornasetti’s china, continued to have a wonderful career in Europe, she never sang at New York’s Metropolitan Opera again.

Now the Monacelli Press and the Vizcaya Museum and Gardens have combined forces to recognize Chanler’s work in the book “Robert Winthrop Chanler: Discovering the Fantastic.” It’s the first new tome about his work in 80 years and consists of a series of essays edited by Vizcaya curator Gina Wouters and Andrea Gollin and includes an afterword by Chanler’s great-nephew, J. Winthrop Aldrich. Vizcaya was originally the Miami estate of Chicago-based businessman James Deering, of the Deering-McCormick International Harvester fortune.

Chanler designed the ceiling of a grottolike swimming pool connected to the house, which looks out on Biscayne Bay. In 2005, Hurricane Wilma badly damaged it, and it wasn’t clear exactly what would be the best way to proceed to restore it. In 2014, Vizcaya hosted a symposium on the artist’s work, and the essays in the new book began, for the most part, as speeches at the symposium. Chanler exhibited frequently at the Whitney Studio Club, run by his patron Gertrude Vanderbilt Whitney, which was the forerunner of the Whitney Museum. He was also the godfather of Diana Vreeland.

One reason, the book posits, for the neglect of Chanler’s work by critics and historians is that many of his pieces are still in private hands, owned by the descendants of the patricians who originally commissioned them. Then there’s the fact that his style suggests Art Nouveau and Symbolism rather than Modern Art.

“Half of the works, we don’t even know where there are,” says Wouters. “We are part of the story. When we were putting the book together at Rokeby, Wint Aldrich said, ‘Wait, we have this thing in the barn. Wait.’ And a mural was unfurled. [In his 1922 publication, “The Art of Robert Winthrop Chanler”], Ivan Norody had written that a huge canvas Chanler had created, called ‘Hudson-Fulton Fete,’ had been destroyed, but in fact, it wasn’t.” In fact, there it was, at Rokeby.

One of the best-preserved of Chanler’s works is in a women’s club on the Upper East Side of Manhattan, which asked that it not be named but allowed Wouters — for the first time in its history — to hire a photographer to shoot its Bird Loggia, a fanciful ceiling and wall mural decoration on the top-floor dining terrace that features a bold mix of butterflies and birds, including egrets, lovebirds, parrots, ring-tailed pheasants, hyacinth macaws and others in a trellis design.

Chanler created a fanciful fireplace as part of his decorative scheme for Gertrude Vanderbilt Whitney’s studio, which still exists. The plasterwork on the Whitney fireplace, created in 1918, makes it look as if it were licked by flames, and it was originally bright red in color.

Whitney was the aunt of Gloria Vanderbilt and in the film “Nothing Left Unsaid,” made by Vanderbilt’s son Anderson Cooper and shown on HBO this year, Vanderbilt was filmed in the studio space, a former hayloft. There are plans to allow small groups of people to tour the studio this summer.

Aldrich says of his great-uncle. “He was seriously appreciated as an artist in his time. He played a formative role [in the art world of his time], he got his big screens right out front [in the Armory show]. The standing screens and everything was for sale.

“I think as he got older, tastes changed. He did a lot of portraits, some of them quite good, some of them less so. He died the year after the Crash,” Aldrich says. “Even though it became legal to buy liquor, happy days were over for a while.”