As Clare Waight Keller Departs Givenchy, Who Could Take Over?

Givenchy declined to comment on candidates, saying it would reveal a new "creative organization" at a later date.

With Clare Waight Keller departing after an eventful three-year tenure, Givenchy has sparked a guessing game about its next artistic director.

While still a plum post at one of Paris’ most storied and starry couture houses, the job opening arrives at a complicated moment as the fashion industry grapples with a new world order, the coronavirus epidemic having upended international fashion weeks, brought luxury consumption to a near halt and raised questions about the industry’s breakneck pace and other ills.

Waight Keller and Givenchy revealed the end of their collaboration late Friday, with Givenchy adding that it would announce a new “creative organization” at a later date.

It is understood Givenchy, owned by luxury giant LVMH Moët Hennessy Louis Vuitton since 1998, has quietly put out feelers to a range of talents in recent months, from second-in-command types to the buzzy designer names the French conglomerate tends to favor.

According to market sources, a contract with a new designer has yet to be concluded. 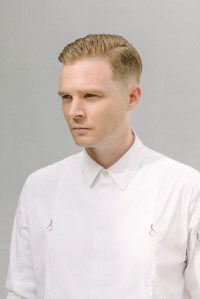 Matthew Williams is among the designers seen as a potential candidate to succeed Waight Keller.  Simone Lezzi/WWD

While Givenchy remains one of the smaller brands at LVMH, eclipsed by the likes of Dior, Louis Vuitton and Fendi, it maintains its allure of stately, aristocratic chic with an edge. 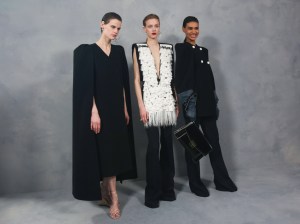 The British designer, who catapulted Givenchy’s international prominence — and her own — by dressing Meghan Markle for her royal nuptials in 2018, departs the French brand at the end of her initial contract.

Her departure, rumored for months, underscores a trend to shorter tenures at heritage brands, and sets the stage for yet another reinvention at the storied couture house.

“Focusing on a world based on haute couture has been one of the highlights of my professional journey,” Waight Keller said in a statement shared first with WWD. “I have shared so many incredible moments with the brilliant Givenchy ateliers and design teams: Your exceptional talent and dedication will forever remain in my memories. My heartfelt thanks go out to each of the unsung heroes and heroines behind the scenes, for their contribution from product to communications and retail, and every global team member, partner and supplier in between.”

Given the absence of an artistic director, and factory shutdowns amid the coronavirus outbreak, Givenchy has canceled its women’s pre-spring collection, and it will not produce a fall 2020 couture collection. It plans to prepare a big men’s collection — combining pre-spring and runway — for sale in its showrooms in June.

Meanwhile, the shelf life of its spring 2020 and fall 2020 collections is to be extended in its own boutiques, a spokesman noted.

Waight Keller was the first woman to lead Givenchy since it was established by Hubert de Givenchy in 1952.

After its founder retired in 1995, the house saw a revolving door of designers: John Galliano, Alexander McQueen and Julien MacDonald.

Riccardo Tisci took over the label in 2005, putting it back on the design map with his daring, Goth-tinged fashions during a stellar 12-year tenure.

Among Waight Keller’s key accomplishments was bringing couture back to the runway — Tisci had opted for static presentations, or sprinkling it into his men’s shows — and establishing Givenchy as the go-to brand for Markle’s dressier occasions, including Royal Ascot. 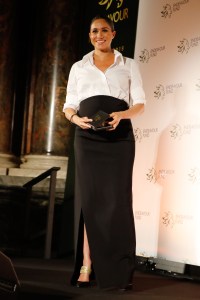 She also continued the brand’s momentum on the red carpet, dressing the likes of Julianne Moore, Rachel Weisz, Gal Gadot and Mia Goth.

“Under her creative leadership, and in great collaboration with its ateliers and teams, the maison reconnected with the founding values of Hubert de Givenchy and his innate sense of elegance. I wish Clare all the best in her future endeavors,” he said.

Waight Keller largely plied a tastefully restrained and genteel brand of couture occasionally spiked with toughness or subversion — a touch of latex here, a giant wing-like backpack there. She dedicated her fall 2018 couture show to the founder, who died that year at age 91, by celebrating “his timeless elegance and grace” and referencing his “iconic creations, technique and personal lexicon.”

Popular with the fashion press, she won largely enthusiast reviews for her shows, particularly for couture, with her women’s rtw pinging between a variety of Eighties and Nineties references and an array of styles, from ravaged denim and modernist tailoring to ruffled dresses.

She boosted the profile of Givenchy’s men’s division by including couture looks for him on the catwalk, and scoring a guest-designer appearance at the Pitti Uomo trade fair in Florence in June 2019. But she did not make significant headway with leather goods, the linchpin and lucrative category upon which many luxury brands depend.

Waight Keller scored the British designer of the year award for women’s wear at the 2018 Fashion Awards in London, and made the Time 100 list in 2019, based upon her dressing Markle for her wedding.

When she arrived at Givenchy, the designer made clear that the boho romance of her six years at Chloé, her previous job, was not her true wheelhouse.

“How I’m perceived here in Paris is actually really different than who I am as a person and as a designer,” she said the night of her couture debut in March 2017. “I started out in the Nineties wearing black for about 10 years. The thing that’s been really exciting coming here, I feel like I’ve put a lot of me back into it.”

The British designer joined Chloé in 2011 after a six-year stint designing Pringle of Scotland. A calm, soft-spoken woman with a ready smile, Waight Keller brought a sure and steady hand to Chloé, rejuvenating its rtw and accessories business and winning largely positive reviews for her collections.

She was a popular and approachable figure among fashion’s upper echelons, and struck friendships with the likes of Karl Lagerfeld, Valentino’s Pierpaolo Piccioli and Jacobs.

During her final days at Givenchy, she took to her Instagram account, which counts 432,000 followers, to document some behind-the-scenes highlights of fittings and photo shoots.

The Designers of Givenchy

Attending Fashion School in the Time of COVID-19

European Independent Designers: How They Cope With the Coronavirus Crisis