As Luxe Would Have It: The High-End Market Rebound

Racked by recession, the luxury market has begun to rebound, with elite brands offering gentler prices. But the affluent consumer isn’t the same. 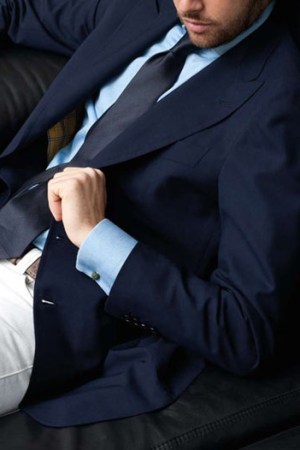 For a long time, luxury labels were above it all. Brands aimed at the most affluent sliver of the market were simply immune to recession, they had long maintained. So it caused a minor stir this spring when Kiton, the renowned Neapolitan tailored-clothing company, introduced a lower-priced line called CIPA 1960 at Bergdorf Goodman Men.

Everything remains relative. Although CIPA is pronounced “cheap-a,” the new collection is anything but. It includes beautifully tailored suits for $5,500, stitched entirely by hand, but made with fine archival wool or linen fabrics instead of Kiton’s usual cashmere blend. This helps shave about 30 percent off the typical $8,000 price of a classic Kiton suit—a meaningful saving for the upscale shopper still skittish after the Wall Street meltdown of fall 2008. And if the economic crisis has taught luxury marketers and retailers one lesson, it’s this: The old notion that they are recession proof is a myth.

Leaders in the luxury field are quickly adapting to a seismic shift in the market, one that affects not just pricing, but also consumer attitudes, shopping patterns and the very definition of luxury. As Gregory Furman, founder and chairman of the Luxury Marketing Council, puts it, “The luxury shopper has changed and will continue to be changed as never before.”

Ron Frasch, vice chairman and chief merchant of Saks Fifth Avenue, sees opportunity for those who respond to this rapidly evolving consumer. The Great Recession, he says, was a “wake-up call that significantly changed what we do. And perhaps it was long overdue.”

The shake-up stems in part from a significant decline in the size of the core luxury market. According to the 2009 World Wealth Report by Merrill Lynch Global Wealth Management and Capgemini, the world’s population of high-net-worth individuals—defined as those with investable assets of more than $1 million—shrank 14.9 percent to 8.6 million people in 2008, as their combined wealth fell 19.5 percent to $32.8 trillion. The ultrahigh-net-worth population—individuals with assets of $30 million or more—saw an even steeper decline of 24.6 percent.

And the market didn’t improve in 2009. According to the global consulting firm Bain & Co., last year was the worst ever for the global luxury goods business, with sales falling 8 percent—albeit from a very lofty perch.

Lately, there have been hints of a rebound. Sales began to regain some strength by holiday 2009, and Bain forecasts a 4 percent increase for 2010. “We’re seeing now that consumers are going back into stores,” says Claudia D’Arpizio, lead author of the Bain study.

Cara David, senior vice president of corporate marketing and integrated media for American Express Publishing Corp., also reports a “modest resurgence” in the luxury sector. “We’re seeing a little slack in the guilt and angst over purchasing luxury products,” David says. According to Amex Publishing, 45 percent of affluent consumers now say they feel guilty buying luxury goods, down from 54 percent last year, and David says this attitude adjustment will have an estimated $28 billion net impact on the luxury market, or a gain of 6 to 8 percent.

But even if luxury has begun to bounce back, the profound shift in the consumer mind-set is expected to endure. Jim Brennan, a principal at McKinsey & Co., predicts an ongoing emphasis on value and values that could last five to 10 years. Consumers will buy fewer pieces at lower prices, he says, and they will favor products they consider iconic or authentic. Brennan notes that luxury shoppers have returned to buying jewelry, watches and other “statement pieces that can be handed down to their kids.” Apparel has not rebounded as quickly.

But America’s luxury retailers have already set out to change that.

Saks is “resetting our ways,” says Frasch, “particularly in tailored clothing, dress shirts and shoes.” While offering more goods at opening price points, the store is creating exclusive products and brands to distinguish itself from the competition. “We’ve enhanced our good, better, best model,” Frasch explains. “In the past, our assortment of ‘good’ was OK; our ‘better’ offering, brands like Corneliani and Canali, was respectable, and we had a fine ‘best’ offering, with Zegna, Brioni, Armani and Kiton. But our ‘good’ model has really grown.”

The core suit price is now around $1,500, down from $1,700 in 2008, as Saks lures new customers with younger silhouettes and lower prices from brands such as Michael Kors, Hugo Boss, Z Zegna, Versace, Calvin Klein and Burberry. The retailer has also scored with its new Saks Fifth Avenue Men’s Collection, a comprehensive assortment of modern classic men’s wear with sharp prices. Suit separates, for example, retail at $695 for jackets and $195 for pants.

As Frasch tells it, the men’s luxury shopper is “looking for a quality product at a fair value, not low price.” He cites the “tremendous resurgence of made-to-measure” as evidence the customer is willing to pay a premium for products with clear intrinsic value. Frasch sees potential in luxury sportswear, as well. “As bad as last year was, we had a good year with Brunello Cucinelli, which can never be called volume pricing,” he says.

Russ Patrick, senior vice president and general merchandise manager of men’s wear at Neiman Marcus, acknowledges the luxury retailer “took a hit” during the recession. “So we worked to get our inventories in line,” he says. “With less open-to-buy, there was less room for error, so we had to be spot on. It required us to be better editors.”

“We worked closely with our important vendors to adjust costs on specific ranges of fabrics so we could retail a portion of their suit offering under the $2,000 price point,” said Patrick. “In addition, we introduced two lines, Z Zegna and Caruso, this year, which offer a full collection of suits under $1,500.”

The strategy is paying off: Sales have improved across all categories as shoppers respond to fresh offerings. Still, the Neiman’s customer will continue to be “more mindful about shopping,” Patrick says. “So we have to remain focused on product, challenge our vendors for newness and give him things so he can continue to update his wardrobe.”

One of the ongoing challenges in the luxury field is the aspirational consumer, who has pulled back, according to Pam Danziger, president and founder of Unity Marketing. Danziger defines this segment as households with income of $100,000 to $249,900—23 million households in the U.S., compared with only 2.5 million with incomes of more than $250,000. “The buoyancy in the luxury market prior to the recession was due to aspirational shoppers trading up,” she says. “But now, they’re simply not participating.”

As Danziger sees it, future luxury-market growth will depend upon attracting “ultra-affluent consumers” who “will demand higher quality and more value in luxury purchases.

They also demand more information. Although the affluent consumer remains willing to pay a premium for quality, he now insists on knowing why a product costs what it costs—a phenomenon that Furman, of the Luxury Marketing Council, calls “connoisseurship.” According to Furman, 90 percent of luxury shoppers started out in the middle class. Luxury brands, he says, must “not assume they understand the underlying value of a product.”

That gives an edge to brands that convey “craft and heritage,” says Robert Burke of Robert Burke Associates, citing classic clothing labels such as Kiton, Brioni and Zegna. “The consumer is happy to invest in long-term pieces, but they’re not spending frivolously,” he says. Nor are they spending at the same rate as they did in the past. “It doesn’t feel or sound right today to buy 14 custom suits,” Burke says. “They’re buying luxury in a quieter way.”

Bergdorf Goodman has responded by bringing in key classifications at a “more gentle price point,” says Margaret Spaniolo, senior vice president and general merchandise manager of men’s. “There were men who took a couple of seasons off, but we felt our customer still wanted the brands that we carry in our store,” she says. That desire for luxe brands minus the sticker shock prompted Bergdorf to bring in Kiton’s CIPA 1960 suit collection and other accessible offerings.

“It worked,” Spaniolo says. “We saw the customer come back in shopping.” But not in the same way he did in the past. “The consumer psyche has changed,” she explains. “All of us used to just buy what we liked without thinking about it. Now we think about what we’re spending. If this didn’t wake us all up, I don’t know what it’ll take.”

What the new luxury consumer really wants is “a variety of price points,” according to Bob Mitchell, co-president of the Mitchells Family of Stores, headquartered in Westport, Conn. “He still wants luxury, but he wants to mix in some other pieces, primarily in sportswear.” The Mitchells have paid increased attention to what they call “approachable” pieces, such as cashmere sweaters for $300 to $400, or denim-friendly sport coats and shirts. At the same time, luxury brands that have “repositioned their suit prices are getting traction,” says Mitchell. That includes Brioni, which came in under $5,000, and Zegna, with some basic models for $1,995 or less. Canali offered $1,495 suits, down from $1,900. “That kind of choice had vacated the market before,” Mitchell says.

Robert Ackerman, president and chief executive officer of Ermenegildo Zegna’s North American business, says, “Broadening the assortment of suits helped the business.” The brand also has seen an uptick in its sportswear sales, along with shirts and ties—smaller-ticket items that can “freshen a wardrobe,” Ackerman says.

Mitchell, meanwhile, sees the spreading of price points as an opportunity for additional sales. “There’s potential for us to get more closet share,” he says. “They’re buying Cucinelli, but they’re also picking up a $195 sweater they can play golf in.

“We drank our own Kool-Aid,” Mitchell adds. “Even in the [luxury] heyday, they bought other stuff, they just bought it elsewhere. We’re better merchants today, having that breadth.”