As Milan Shows Near, Italy Steps Up 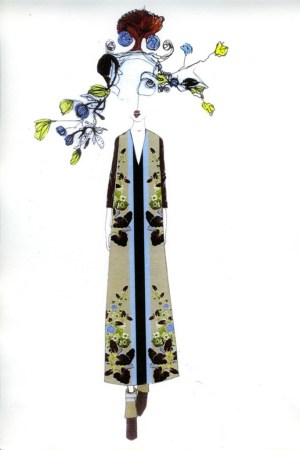 MILAN — “A mayor must be wherever there is Italian beauty.”

So said a proud Giuliano Pisapia, Milan’s top elected official, earlier this month during the presentation of the city’s fashion, held under the grand stuccoed vaults of the stately town hall, Palazzo Marino. With his presence and comments about one of Italy’s main industries, Pisapia marked a stronger collaboration between Milan and the fashion world. Italy’s national government is also paying more attention to fashion. The country’s deputy minister of economic development Carlo Calenda has said the government plans to pump 40 million euros, or $45.5 million at current exchange rate, into the nation’s fashion industry in 2015, up from an average of 5.2 million euros, or $5.9 million, a year for the past five years.

Milan Fashion Week starts Wednesday amidst positive economic trends. The weaker euro is expected to boost exports while lower oil prices will help the nation’s economy. Industrial production has risen in Italy for the last two months in a row, the first time that has happened since 2013. Earlier this month, the Bank of Italy raised its economic-growth forecasts for the country following the quantitative easing unveiled by European Central Bank president Mario Draghi in January. Despite a slowdown in Russia and emerging markets, the fashion industry’s exports in 2014 are expected to grow 4.8 percent to 47.4 billion euros, or $54 billion, according to the most recent Fashion Economic Trends study by the country’s Camera della Moda, and Italy’s fashion industry is expected to log 1.6 percent growth in the first half of 2015. Sales in 2014 are forecast to increase 3.7 percent to 61.6 billion euros, or $70.2 billion.

Ahead of the international expo in May, a certain degree of anticipation and excitement is running through the industry as observers wait to see the first women’s collection from Gucci’s new creative director Alessandro Michele, which will start the Milan season on Wednesday. Signatures on the dotted line are still missing in the sale of the Roberto Cavalli business to private equity firm Clessidra while a successor to Mario Boselli, the long-standing president of the Chamber of Fashion who is due to step down in April, has not yet been named.

Among the 151 collections to be presented during the week, which ends on March 2 with the Dsquared2 and Giorgio Armani shows, Krizia will unveil its first full-fledged presentation under the new ownership of Chinese fashion retailer Shenzhen Marisfrolg Fashion Co. Ltd., and its chairman and creative director, entrepreneur Zhu Chongyun. Friday will see the debut of the Giambattista Valli for Seven For All Mankind collection at 10 Corso Como and the first Philosophy di Lorenzo Serafini show.

While the launches and new arrivals are likely to generate additional spark to Milan, the shows will take place against a backdrop of some concern. Russia and China remain problematic, the former because of its weaker economy and the latter because of a slowdown in demand.

Massimo Ferretti, executive chairman of parent company Aeffe SpA, expressed confidence in 2015 after seeing a 25.8 percent jump in sales in Greater China and gains in Italy and Europe last year, which helped offset a decrease in Russia, due to a slowdown in that region’s economy. “We saw a 15 percent increase with our spring orders, and we are very satisfied with the performance of our pre-collections,” said Ferretti, expressing worries about the Russian market and its “satellite countries” going forward, balanced, however, by China and the U.S. Aeffe Group, which controls the Alberta Ferretti, Moschino and Pollini brands, and produces and distributes collections for labels including Emanuel Ungaro, designed by Fausto Puglisi, and Cédric Charlier. The Moschino brand was revitalized last year by the arrival of new creative director Jeremy Scott. Ferretti said Scott is working on a documentary film on himself to be completed by the end of the year. After the recent opening of a Moschino boutique in Los Angeles and the upcoming unit in New York, Ferretti said the brand will open a fourth Milan store in the new Porta Nuova area in May to coincide with the city’s Expo.

Michele Norsa, chief executive officer of the Salvatore Ferragamo group, also pointed to concerns about Russia and the diminished number of Russian tourists, “which is not something that can be solved quickly.” He remarked on the company’s advantage as a “very global” firm with balanced markets and a positive travel retail contribution. Despite geopolitical issues in Russia, the Middle East and China that impacted 2014, Norsa touted the company’s “consistent growth at a higher pace than the market.” The company has posted 2014 preliminary revenues of 1.33 billion euros, or $1.77 billion, up 5.9 percent, as reported.

Speaking before a trip to Hong Kong, Norsa said that “the last quarter of 2014 was destabilizing in the region at a psychological level [due to the antigovernment protests].” He added that “the Chinese travel more to Hong Kong,” but wondered if there is a diminished desire to shop there. The Chinese, he added, also travel more through Japan, Taiwan and Korea. Sales during the Chinese New Year will help brands assess the situation and provide an outlook for 2015, which he said was still “difficult to evaluate as it is subjected to volatility.” The executive also cited the favorable euro exchange rate; the decline in the price of oil and raw materials that should help boost European economic growth and a backdrop that affords more opportunities.

The luxury company has a busy year ahead, with an event scheduled in Kyoto in April; the reopening of the Rodeo Drive boutique in Los Angeles between May and June — a new one-of-a-kind concept by Bill Sofield; a new exhibition at the brand’s museum in Florence between April and early May; the reopening of rooms at the Uffizi Gallery thanks to a donation by the company of almost $700,000, and an event in China in the second part of the year. Ferragamo is also launching its Emozione fragrance in Mexico in March.

Versace ceo Gian Giacomo Ferraris also pointed to his company’s global reach, balanced markets and product categories, with accessories now representing almost 40 percent of sales. In September, Versace opened an accessories boutique in the Galleria Vittorio Emanuele II shopping arcade in Milan. On Sunday, Versace and Prada will host a rare guided tour of the Galleria from the higher rings of the arcade, whose restoration the two brands have been supporting. “Versace has long been associated with beauty, art and culture, as well as with the city of Milan, where the company was founded in 1978,” said Ferraris, proudly pointing to ingalleria.com, a digital project launched in December with Prada that is dedicated to the retail venue.

Mario Filippi Coccetta, president and ceo of Fabiana Filippi, trumpeted ongoing growth as the Italian women’s cashmere firm posted a 12 percent gain last year, reaching revenues of almost 65 million euros, or $86.4 million at current exchange, and “homogeneous” gains in all markets, even a “modest” increase in Italy. Despite some of the “clouds” hovering over 2015, Filippi Coccetta said the firm will leverage the weaker euro, seeing the year as one of consolidation. “We have the ambition to grow and the courage to invest. It is fundamental to invest, and clients and customers alike perceive the efforts made. There are favorable prospects for the year, and we are strongly focusing on the U.S.”

International expansion also helped Brunello Cucinelli report growing preliminary revenues in 2014. But three major Italian groups saw a slowdown in the year. Despite a slight improvement in the fourth quarter, Gucci ended the year with revenues down 1.8 percent at 3.5 billion euros, or $4.65 billion. The brand enjoyed positive sales in Japan and the United States but faltered in Europe and the Asia-Pacific region, where antidemocracy protests strangled tourist flows to Hong Kong and Macau in the fourth quarter.

On Sunday, Prada Group said that preliminary revenues slipped 1 percent last year, totaling 3.55 billion euros, or $4.65 billion at average exchange, prompting ceo Patrizio Bertelli to underscore “a geopolitical and monetary environment that was more uncertain and complex than could have been envisaged.” While “temporarily” slowing down the group’s growth, Bertelli said the situation “will not affect [the group’s] medium-long-term growth objectives.” While Prada saw growing sales in the Americas, Japan and the Middle East, the Far East was hurt by a slowdown in Macau and Hong Kong, and Europe was dented by a fall in tourist spending and ongoing lackluster local demand.

Earlier this month, Tod’s SpA reported flat preliminary full-year sales 965.6 million euros, or $1.28 billion, following lower revenue at the flagship Tod’s brand and at Hogan, highly exposed to the Italian market, and the negative impact of currency fluctuations, as well a weak demand in China, and in Hong Kong in particular. The Italian group said that sales improved sharply in the fourth quarter, increasing 4.5 percent. Diego Della Valle, Tod’s chairman and ceo said that, “despite the low visibility and uncertainty of some markets,” he was “confident” in positive results for the group this year.