Now that Elizabeth and James is in-house, the Olsens reveal their strategy for the brand. 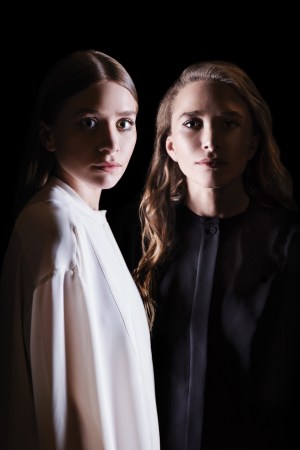 “We’ve always worked around the clock. We’ve been working since we were nine months old,” said Mary-Kate Olsen of herself and her sister Ashley Olsen.

In August, the 29-year-old designers took back the license of their contemporary brand Elizabeth and James from Los Angeles-based Jaya Apparel Group, which had held it since its inception in 2007. The first collections under the Olsens’ purview are pre-fall 2016 and fall 2016, which is being shown to retailers this month during New York, Paris and Milan markets and to the press in March.

Interviewed last week at their headquarters at 609 Greenwich Street in New York — where both Elizabeth and James and their designer line The Row are now based — the duo discussed their top priorities for the contemporary collection, which include retail expansion of all their product categories, international growth and broader distribution for their fragrance business, which has been an exclusive to Sephora for the past two years.

Asked what prompted the decision to bring Elizabeth and James sportswear in-house, Mary-Kate said, “We’ve been doing The Row in-house for the past 10 years, and it’s been a slow, steady growth and very strategic. It was just the right time. We’re very involved with product and very involved with make and quality. It was really important to tell the same story. When you have a brand, it’s important that the message is the same.”

How will they balance designing two major collections? “To be honest, because it’s in-house, it’s actually easier. We’ve always been involved in both. It won’t be that much of a change,” Mary-Kate said.

The designers will now be able to reinforce their vision for Elizabeth and James, which is based on a modern woman’s wardrobe and effortless dressing. The contemporary brand is building out categories such as knitwear, dresses, tops and pants into a well-rounded offering, with a strong emphasis on fit.

“He really trusts us and we’ve developed a trusting relationship. We go to him for advice on certain things,” Ashley said. She explained that they’ve known each other for some time and when this opportunity arose, “we both found it an exciting venture to go about doing it together.”

While the sisters declined to reveal how much volume Elizabeth and James generates, they said that it does more units than the The Row, which is a luxury brand, but The Row does more volume. Market sources indicate that Elizabeth and James apparel and accessories generate between $40 million and $50 million in wholesale volume. Fragrances at Sephora account for $18 million at retail, said sources. The entire business is under the supervision of Jill Collage, president of Dualstar Entertainment Group, parent company of The Row and Elizabeth and James.

The sisters, who speak in soft tones, said they work in tandem, have lots of conversations and talk everything through. Asked if they actually sketch designs, Mary-Kate replied, “We drape.”

The company has hired a full-time designer and an assistant designer for Elizabeth and James. They’ve brought in 12 new people and will add another 20 to 30 over the next six months. “Everything is starting from scratch,” Ashley said. “We’re building a sales team, a merchandising team and we’re going to have stores.”

In July, the Olsens will open their first retail store for Elizabeth and James at The Grove in Los Angeles. Based on the first floor of a town house, the 3,000-square-foot boutique will present the complete lifestyle collection of Elizabeth and James ready-to-wear, jewelry, accessories, sunglasses and fragrance, as well some vintage clothing.

“There’s so much foot traffic there. We were born and raised in Los Angeles, so for us it’s where our customer is. The customer’s already there, she doesn’t need to drive,” Ashley said. The sisters opened a store on Melrose Place for The Row in May 2014, which they said has been successful.

Starting from scratch may be a bit of an understatement since Elizabeth and James’ apparel and accessories are distributed at more than 600 points of distribution in more than 35 countries. Global distribution includes Bergdorf Goodman, Neiman Marcus, Saks Fifth Avenue, Nordstrom, Bloomingdale’s, Net-a-porter.com, Liberty, Harvey Nichols, Holt Renfrew, Harrods, Matchesfashion.com, Shopbop.com and Lane Crawford.

The fragrance business represents another growth opportunity for the brand. Elizabeth and James Nirvana Black and Nirvana White eau de parfums launched in December 2013 exclusively at Sephora in the U.S. and Canada. Nirvana has been the number-one fragrance launch for sales at Sephora in the last five years. “Sephora has been an incredible partner,” Ashley said, noting the fragrances are licensed to Butterfly Beauty LLC, which is headed by partner Robin Burns-McNeill.

The product offering has expanded to include perfume oil, solid perfume compacts, body oil, hand cream and most recently, dry shampoo, which is the number-one brand at Sephora in that category.

This spring, Elizabeth and James will expand fragrance distribution, launching the full assortment into Nordstrom, Net-a-porter.com, Von Maur and Holt Renfrew, which will be supported by a national print and digital advertising campaign. Elizabeth and James is also expanding the Nirvana collection for fall.

For the most part, the Olsens have built both The Row and Elizabeth and James with virtually no advertising, except for co-op ads. Despite the public’s fascination with them, the former child stars shun the idea of being considered a celebrity brand. The company uses social media, such as Instagram, Snapchat, Facebook and Twitter.

“We’ve always been involved in controlling the product and making sure it’s right. If the product is good, the product should sell,” Mary-Kate said. “Marketing right now is about getting it on the right girls. We’ve had a good track record with that.”

Unlike many of their competitors, the Olsens haven’t ventured into their own e-commerce yet because of the expense. “We have a great business right now. We do a great online business [on other companies’ Web sites]. If we wanted to open another retail store, we would think of e-commerce retail, if we were planning it,” Mary-Kate said.

She said that at some point they will consider e-commerce for Elizabeth and James and The Row, but it’s more expensive than opening a retail store. “You have to be sure you’re set up internally. There’s a lot of great competition in e-commerce. You have to be competitive with Net-a-porter and Shopbop, which are doing a great job already. They make it their number-one priority,” Mary-Kate said.

Ashley said they have expanded both the sweater and denim categories, and all of Elizabeth and James apparel will continue to be made in Asia, although they are switching factories.

Describing Elizabeth and James “as a little more playful and a faster business” than the luxury collection, Mary-Kate said they are planning 10 deliveries a year. “It’s a constant flow,” she said. The majority of the Elizabeth and James rtw retails from $195 to $795, with the average between $350 and $400. There are some specialty outerwear and fur pieces going as high as $2,595. Handbags retail from $295 to $645, with the average around $445.

“When we first started Elizabeth and James, we did a huge blazer and a huge shirting business. We’ve recently had a huge dress business. But we haven’t really gone deeply into sweaters,” Mary-Kate explained. She pointed out that while dresses will still be important, the market has gone in a very masculine way. “People will still continue to buy into the dress category because it’s safe for them, and we’ll slowly be able to trickle in other items and take it from there. I think the most important thing was not losing business but maintaining and then growing. Continuing the trust, being able to deliver on time, making sure the product’s right and the quality is there,” Mary-Kate said.

As for what additional categories they might consider, Mary-Kate said, “I don’t think we’re looking to expand into other categories, possibly color [cosmetics]. That would be in the future.” Her sister noted they’ve been having conversations for years about the ath-leisure category. Ashley noted that in order to do it properly they would need to partner with someone who knows that technology. “You really need it to be functional,” she said.

Stores were enthusiastic about the collection, having viewed pre-fall in December.

“The fabrics are beautiful, the styling, the items. It’s that full wardrobe of perfect items that are interchangeable. The perfect skirt, the longer length, the fluid pant, the perfect track pant, the beautiful blouses, the knitwear to die for,” said Sarah Rutson, vice president of global buying at Net-a-porter.

“Those girls have a very refined, defined point of view to clothes and to fashion and to personal style,” Rutson said. “They have an extraordinary taste level. Now that it’s under Mary-Kate and Ashley, there’s more cool wardrobing in there and a lot more daywear.”

Ken Downing, senior vice president and fashion director of Neiman Marcus, said, “There was a very definitive fashion point of view to the collection. Great wide pants, terrific dresses with handkerchief hems, great colorization and very ‘buy-now-wear-now,’ which is something I’m beyond obsessed with because that is how the world is changing.”

She said Elizabeth and James is a brand that resonates with her Bloomingdale’s customer. She cited the knit sweaters and sweaters with a ruffle. “Their mixing of a satin skirt with a gorgeous knit top — it felt so luxurious to me. We are very confident about the continued success of the brand,” Jaffe said.