By Emilie Marsh and Jean Scheidnes on June 18, 2010
View Slideshow 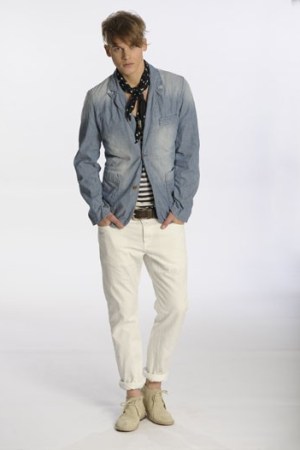 FLORENCE — The time for cowering in darkness has passed.

Companies at the Pitti Uomo fair here, unveiling their spring men’s collections, were taking risks again — from the formation of new partnerships and brand extensions to bolder, more cheerful approaches to merchandising.

“Last season, people were obsessed with the recession, and it showed in the collections, but today brands are getting back into the pleasure of making garments and there is a lot more new and fresh merchandise on offer,” said Hirofumi Kurino, senior adviser and creative adviser for Japan’s United Arrows Ltd.

The biggest reason for optimism? Manufacturers noted a return in business, especially in the United States, and some projected sales increases of 30 percent or more for this year.

“The United States is back on track; they are our number-one market. We are seeing growth in our own stores, but also with our multibrand retailers,” said designer Brunello Cucinelli.

Outerwear maker Allegri expects to close its fiscal year up 32 percent in sales. The brand has doubled its business in the U.S. over the last two seasons, said Allegri president Gian Maria Argentini.

The U.S. is enjoying a boost from a stronger dollar relative to the euro. The average exchange rate in January was $1.43 to the euro, and now it’s $1.24. While this change cuts in multiple directions, the upside is the currency swing should boost orders from the U.S.

“The euro is definitely a topic of conversation with everyone,” said Saks Fifth Avenue’s Eric Jennings, vice president and fashion director of men’s wear. “The [weaker euro’s effect on] tourism could impact the New York store, but it should only help and benefit us in terms of buying.”

And there are new reasons for consumers to spend, said retailers.

“One of the most exciting things is all the color that’s here,” said Kevin Harter, Bloomingdale’s vice president of men’s fashion direction. Collections were awash in vibrant aqua, tangerine, red, lime green, pink and china blue — and not only in solids, but dots, stripes, paisleys and tropical florals.

Italian shirtmaker Bagutta kept it on the sunny side with a cheerful collection of colorful men’s shirts — some splashed with polkadot and paisley motifs.

“Everyone had a difficult year, now men want something that makes them feel happy,” said Antonio Gavazzeni, chief executive officer of Bagutta.

During the downturn, vendors in survival mode hewed to the safest, most commercial offerings they could muster. They clung to their foundations and their historical bestsellers. While playing up heritage certainly remains a key marketing strategy for many brands, they are now beginning to take small initiatives with an eye toward the future. For example:

• Since London-based Hackett inked a distribution partnership with Coach Inc., its thoughts have turned to this new business model and to the potential benefits of tapping Coach’s expertise in Asia and the U.S. Hackett also developed a new co-branded watch line with Tag Heuer.

• Shirtmaker Gitman Bros. has branched into bottoms via a collaboration with Corbin, a trouser company under the same parent, Individualized Apparel Group. Gitman is moving beyond vintage preppy patterns, into paisley, camouflage and even animal spots.

• Ballantyne has rethought its whole image. Exhibiting inside a Fifties gentleman’s clubhouse modernized by video projections and contemporary music, the brand’s focus was less on colorful cashmere sweaters than on making a new statement. “This is not a collection of knitwear, but a new lifestyle, a modern dandy who is a bit younger and more fashion conscious,” said creative director Alfredo Argiro.

• Many brands reacted to the downturn with lower-priced product, but others took a different kind of risk, a commitment to unabashed luxury. Zilli introduced 24-karat gold sunglasses and a taupe crocodile travel trolley, which boasts a price tag of $30,000.

• Slowear Group, which owns a stable of Italian brands including Incotex, Zanone and Montedoro, will extend the higher-end Red label to two other brands — Glenshirts Red, shirts made from Japanese cotton spun on antique looms, and 2B3 Red, a rugby- and cricket-themed range of polos. And Slowear will roll out a new corner concept for U.S. department stores early next year.

• Accessory brand Want Les Essentiels de la Vie plunged into a category ripe for innovation: leather iPad cases retailing for $295. With pockets for credit cards and paper bills, they are designed to eliminate the need for a separate satchel.

Tailored clothing had been men’s wear’s Achilles’ heel during the recession, but in some markets, the traditional offerings have begun to recover. Sport coats, “like the ones your dad used to wear,” were making a splash at the show, said Eddie Prendergast, the owner and self-titled “chief bottle washer” of London’s happening men’s wear shop, Present.

American tailor Oxxford Clothes displayed exuberant pinstripes and windowpane checks. The Chicago-based company has started to offer its trim Japanese fit to the entire distribution network. And Oxxford’s lower-priced line, 1220, has evolved into an effective stockkeeping program, according to sales director Timothy Sandifer.

Brunello Cucinelli embraced the suit for spring, but took a sporty approach, pairing polo shirts with suits made from washed fabrics.

“The rules have changed. Suits are still worn in the boardroom, but we see younger men gaining interest in wearing suits to university and for social outings,” Cucinelli said. On the other end of the offerings, Cucinelli is also debuting beachwear. He expects the brand’s 2010 sales to increase 18.2 percent to 187 million euros, or $231.6 million at current exchange.

The recent trend toward unstructured blazers went a step further this season, as blazers came in the most casual of materials, from polo shirt fabric by Hackett to stonewashed sweatshirt jersey by Ballantyne.

“More than anything, we’re seeing very relaxed, beautiful, elegant, dressy sportswear that doesn’t replace a suit, but gives you more opportunities to get dressed up in something other than a suit and other than jeans,” said Holt Renfrew’s Lanita Layton, vice president and general merchandise manager for men’s wear and footwear.

Bloomingdale’s concurred. “This whole nondenim pant category, between the khakis and cargos, will give guys a lot of reasons to come in and buy pants. And we also like all the unconstructed jackets again, this time in fun colors and patterns,” said Harter.

“Florals, camo, awning stripes. It was really check-heavy for a while, so that’s a nice change,” said Saks’ Jennings. “There’s still a lot of worker wear, tons of chambray and still going back to heritage and vintage. Sundek is telling a vintage California surfing story that we love.”

Closed, an Eighties brand from Hamburg, has been enjoying a revival under new backing and creative direction. Its booth was busy, with buyers clamoring for accessibly priced, vintage-inspired khaki and denim workwear.

“There aren’t any great big movements; it’s a continuation of last season’s classic plays on Americana and workwear garments,” said Present’s Prendergast, who was a former designer of Duffer of St. George.

Among labels garnering attention from buyers are the newly crowned winners of Italy’s “Who’s On Next?” talent search. FQR by Fabio Quaranta won for men’s ready-to-wear and bag designer AI_by Andrea Incontri won for accessories.

Buyers also noted the strength of the accessories. Kurino of United Arrows said he would increase his budget over last season to accommodate accessories, which are getting “increasing stronger with each season.”

In outerwear, supple leather and buttery suede blousons were key items. Performance outerwear continues to be driven by the technical development of lightweight, breathable fabrics.

• Vibrant colors, including acqua, tangerine, red, lime green, pink and china blue — and not only in solids, but dots, stripes, paisleys and tropical florals.

• The return of the sport coat, either traditional or in blazer form in unusual fabrics like polo shirting.

• Relaxed yet dressy sportswear that replaces jeans and cargo pants.

• A continued boom in accessories.