In the Limelight: Marco de Vincenzo

The young Sicilian designer has caught the eye of LVMH. 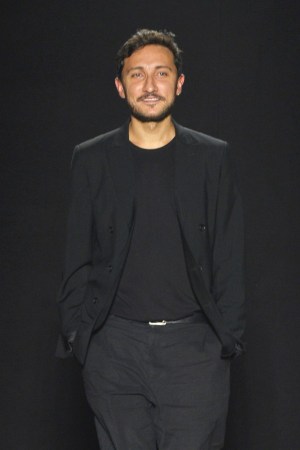 Being noticed by LVMH Moët Hennessy Louis Vuitton might whip some up-and-coming designers into a froth. Not so for Marco de Vincenzo, who had one of the most talked-about collections in Milan this season.

De Vincenzo’s feet are firmly on the ground, despite the fact that Pietro Beccari, chief executive officer of Fendi, confirmed in September that parent company LVMH is interested in acquiring the young Sicilian designer’s brand.

His calm demeanor is highly appreciated by all those who work with him, says Giovanna Battaglia, who styles de Vincenzo’s runway shows.

“He has incredible aplomb. He never loses control, is very pragmatic, not hysterical and is nice to everyone,” she reports.

After launching at Milan Fashion Week in September 2009, the 35-year-old designer, who’s based in Rome, won Vogue Italia’s “Who Is on Next?” competition. Since then, he has established a strong, sophisticated point of view that combines a classic allure with tech-savvy textile treatments.

“I like to create optical effects with materials,” de Vincenzo says backstage at his spring show. “Every single piece should create two different perceptions in the observer, who has to be hit by the first impression, but then has to discover something more.”

His pretty lineup, which Battaglia says was “for the mademoiselle of the future,” includes cotton and nylon skirts that upon closer inspection reveal plissé and eyelet details, while the tubular knitted pieces rely on graphic, saturated color effects.

De Vincenzo developed strong skills in working materials at Fendi, where in 2000 he began helping Silvia Venturini Fendi design the brand’s accessories collections. The designer still consults for the Roman fashion label, which supports de Vincenzo’s own line with production and logistics.

“Of course, having the support of such an important company helps both on the technical and psychological side, because it makes you feel more comfortable in experimenting and it gives you more freedom in managing your resources,” says Tiziana Cardini, La Rinascente’s fashion director, who is also part of the “Who Is on Next?” jury. “But this additional support doesn’t take away from his individual talent.”

Highlighting the progression of the collection from season to season, Cardini says, “I can see an evolution in his path, he is flexible but at the same time loyal to his vision, which he is continuing to develop.…The last collection was very coherent, and he demonstrated that he is setting aside the overly elaborate and experimental codes that marked his first collections. His aesthetic stands out for its unique language of mixing volumes, architectural shapes and details. But what made the difference is the fact that he preserved his attitude toward research, making it fresh and opting for easy silhouettes, beautiful color combinations and a great fit.”

The collection was not only an editorial success, but is also performing well in terms of sales, says Leonardo Cappannelli, chief executive officer of L.A. Distribuzione, the Milan-based showroom that has started worldwide distribution of the brand with the spring season.

“Compared to other young designers, Marco has something more to say. Even if he does a lot of experimentation with fabrics, his collections are very wearable,” observes Cappannelli, who cited Paris’ Le Bon Marché, London’s Liberty, MyTheresa.com, the Milanese Gio Moretti, Gente in Rome and 10 Corso Como in Shanghai among the retailers selling the spring collection. Positioned in the designer segment, the brand features “competitive prices—pretty much in the same range as Christopher Kane’s line,” Cappannelli says.

He doesn’t have accessories at the moment, but expansion in that category is certainly a possibility if LVMH gets behind the line.