The show will take place during the upcoming edition of international men’s wear trade show Pitti Uomo, running June 17 to 20.

By Alessandra Turra on May 12, 2014
View Slideshow 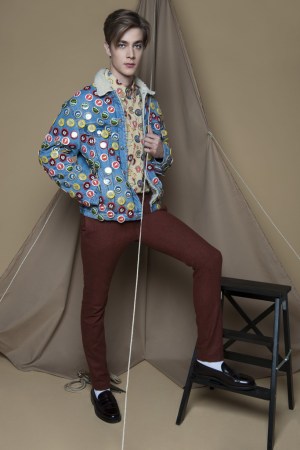 As part of the Pitti Italics program, which supports young designers, the fashion firm’s founders and creative directors Diego Marquez and Mirko Fontana will unveil their Au Jour Le Jour Garçon spring 2015 collection on June 19 at noon at the Dogana, a former Customs house.

“We are very happy to show our men’s collection for the first time at Pitti, which is an international key destination for men’s wear,” Marquez told WWD, adding that a few women’s looks from the brand’s resort collection will also be unveiled on the catwalk. “We think that Pitti can be an extremely important window to boost the growth of the Garçon line, which we launched last year.”

“We have been monitoring the development of the Au Jour Le Jour style and its growing international success for several seasons,” said Pitti Immagine director of communications and events Lapo Cianchi. “The brand founded by Mirko Fontana and Diego Marquez presents a contemporary spirit with an always new and different ‘chic and fun’ approach. It is totally Italian but with a strong cosmopolitan flair, and will present the men’s collection for the first time as part of the Pitti Italics program.”

Since its debut, Au Jour Le Jour Garçon has quickly garnered attention in the Asian market. The brand’s collections are carried at Harvey Nichols in Hong Kong, Galeries Lafayette in Beijing and Beaker in Korea, among others.

“Our current goal for the men’s line is to consolidate our presence in the Far East, where our women’s line is particularly successful, and to expand our business in Europe,” said Marquez.

Au Jour Le Jour, which was founded in 2010, held its first women’s show in February at Milan’s Armani Theater.