The French luxury crystal-maker is in the process of teeing up a growth strategy. 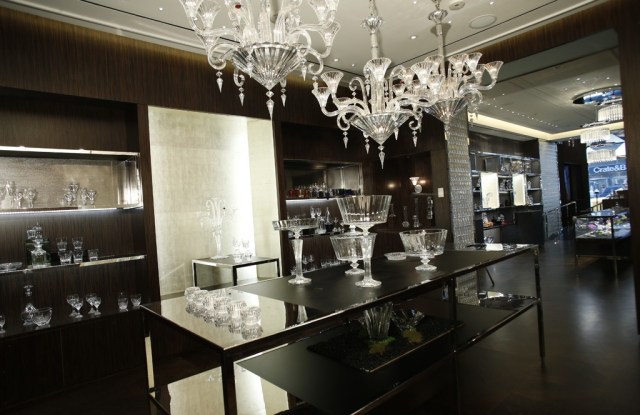 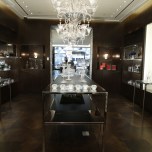 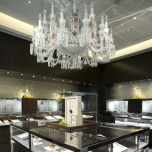 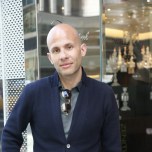 NEW YORK — Baccarat is celebrating 250 years of heritage with new plans to expand its legacy.

The French luxury crystal-maker is in the process of teeing up a growth strategy, which begins with the opening this week of a new flagship here.

Located at 635 Madison Avenue, the 2,800-square-foot store was designed by architect and designer Rafael de Cárdenas, and is meant to be a blueprint for future Baccarat stores.

Through the use of materials such as brushed Nordic black granite floors and walls adorned with Macassar ebony with mirrors and diamond-cut crystal, the space showcases the brand’s jewelry, chandeliers, tableware and lighting in a more modern setting.

“The overall design of the store is very contemporary so that someone interested in contemporaneity can understand that these objects are actually really beautiful and can lend themselves to any setting, ” de Cárdenas said.

The design concept allows the brand to not only pull in a younger customer, but also showcase some of its edgier items, such as a 24-light black Zenith chandelier that hangs over the store’s entryway. The unit also includes a jewelry salon and a lounge for visitors to peruse the brand’s crystal vases, glasses and whimsical decorative figurines.

“This will become our flagship. The project of a new store describes the luxury heritage of Baccarat,” chief executive officer Daniela Riccardi told WWD from the company’s headquarters in France. “We want to have a visible and important presence in the world.”

Although it is her first week on the job, Riccardi, who joined Baccarat from Diesel, plans on “leveraging” the crystal-maker’s heritage, history, allure and design.

This will take the form of a push to grow its store presence internationally and cement itself as a lifestyle brand. With six company-operated stores in the U.S. and 45 doors worldwide, Baccarat hopes to open more stores in the U.S. and in emerging markets, the ceo said, noting the brand also sells its product to department stores here and abroad.

To spread its brand message of luxury, Baccarat, which amassed sales of 158.4 million euros, or $209.1 million, in 2012, will also open a slate of hotels and residences across the globe.

“This is part of a 360-strategy,” Riccardi said, explaining that a Baccarat hotel will open in New York next year, in tandem with the brand’s 250th anniversary.

The luxe establishment on 20 West 53rd Street is being handled by Starwood Capital Group, which owns a majority stake in Baccarat. Other hotels and residences are planned to open in Dubai, Morocco and Shanghai over the next few years.

“There will be a crescendo of events next year,” said the ceo, who indicated that the brand also intends to grow its jewelry offering, a strategy that will enable it to appeal to a broader audience, as most baubles are priced under $700.

But Baccarat has no plans to lower prices, she stressed. Instead, it looks to inject energy into the collections and underscore the company’s high-end heritage.

“I do believe that some categories will play more of a volume role and some will play more with fashion and trend,” the ceo noted. “We want to make sure all the important prongs are going to be activated. We are thinking of some important exhibitions and limited-edition collections. Consumers are willing to spend money on a piece that lasts forever. You keep a Baccarat like you keep a piece of art.”