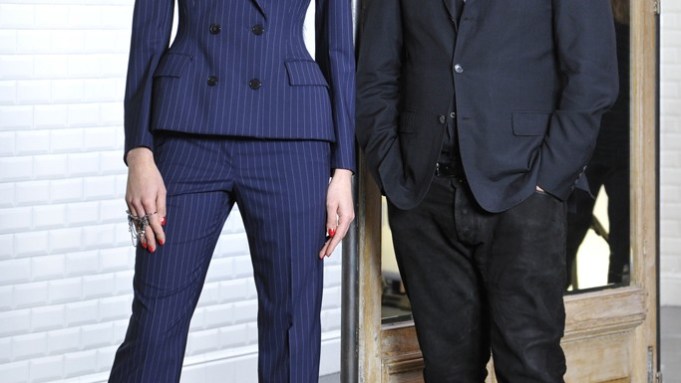 Having recently inked a deal for his top women’s collection with Italy’s Gibò SpA, his original partner in the Eighties and early Nineties, the designer is eager to jump-start a ready-to-wear business whose scale has yet to match his standing in the Paris fashion firmament.

“It feels like a new beginning,” said Gaultier as he showed off looks from his pre-fall collection, which includes a selection of greatest hits from his long career.

The idea for the re-editions line came from the desire to go back to his roots, revealed the affable couturier. “In fashion, it’s about the sensibility of the moment, and I thought it was time to show things which are still good today and can add something extra [to the wardrobe]. But I also wanted to give young women the opportunity to have some of the shapes and pieces I’m most proud of and that are truly me,” explained Gaultier, grabbing from the racks a curve-hugging blazer he created in 1988, padded with a Neoprene lining around the hips.

“You see, Neoprene is much more sophisticated today than it was then. The pieces I did in ’88 must be damaged by now, but the new generation of Neoprene will last another 50 years, I assure you,” he said as if to justify his quirky new project, even toying with the idea of offering a sartorial face-lift to those who still own the original vintage pieces.

The re-edition line consists of about 15 items, including Gaultier’s shocker the “robe sac poubelle,” made of plastic, which was part of the fall-winter 1980-81 High Tech collection (its reissued version comes in a leather fabric that imitates the gloss of garbage bags), as well as the designer’s signature wide-leg pants from the spring 1992 Concours d’élégance collection. Also among the greatest hits revisited is a pair of vertiginous black leather platform pumps from Forbidden Gaultier, the fall-winter collection of 1987-88.

The Gibò deal, plus a new pact with Italy’s Ittierre SpA to launch a yet-to-be named streetwear line for women and men bowing for spring 2014, are the first big developments since Puig became the majority owner of Gaultier’s fashion house in May 2011, and since former Chloé honcho Ralph Toledano became president of Puig’s fashion division a year ago this month.

At the time of the deal, Puig trumpeted big potential for Gaultier, whose creative expression spans from sophisticated high fashions to edgy casualwear. “I can’t give any projections, but our goal is to at least double the sales in the next five years,” Toledano told WWD, assuring that under the new partnership “quality will definitely be improved but the pricing should not change.”

He added: “I think there is a general excitement in the house with the Gibò change, the relaunch of the men’s and the streetwear line, the new watch line licensed to TWC and the restructuring of the accessories offer — handbags and small leather goods, shoes and costume jewelry.”

Gaultier seems eager to maintain his versatile approach. “Luxury sells well, but I always thought it was good to have something more basic that is of value as well,” said the designer, who still sketches his looks the way he did as a boy counting the long hours at school while daydreaming of the extravagant Folies Bergères shows that fascinated him and that would later influence his buoyant aesthetic.

More than 40 years after Gaultier founded his label, he said he approached the pre-fall range (which spans 200 styles) with new gusto, attending all the fittings and visiting Gibò’s sprawling facility in Florence three times since the deal was struck. “It’s an emotional comeback for me, like a family get-together. Walking down the streets of Florence, I ran into many old friends,” he said.

“To be honest, this is also the first time we are ready for America in time,” Gaultier said about the partnership with Gibò and its logistics abilities, describing its chief executive, Franco Pené, as “an excellent manager. I feel pressure on the business side, and so I need to be with people who are more organized than me. Psychologically, being with Gibò is very comforting. It gives me energy and voracity,” said the designer, whose quirky mélange of abounding energy and fearless spirit for adventure is infectious.

Gaultier said with the new pre-fall collection he wanted to leave more room for creativity to the customer. “The idea is to mix pieces based on a two-make-one-formula and create new looks, while playing with the shapes and colors,” he said.

In a typically nonconformist mood, the designer chopped off one half of a black leather jacket — “so you can wear it on top of a classic felted coat [where] it almost becomes an accessory like a bag or a type of armor.” He cut a pair of pin-striped suit pants in two to produce detachable trouser legs, “which can be mixed with a tight wool overall or a chic tuxedo leg,” and accessorized a shaded wool-on-taffeta suit with a feel that changes depending on where one touches the fabric.

“This is something that can easily be done with a company like Gibò; their savoir-faire allows for upscale finishing and fabrics. The quality of leather [in this line], for instance, matches the one I used at Hermès,” according to Gaultier.

With its asymmetric silhouettes and moveable parts, the collection is both soft and architectural. Fur and leather lend an unmistakably “Gaultier” look to the range, which boasts street-chic biker leather jackets with patches of stretch, elegant trench coats radically cropped below the chest line and in tune with Gaultier’s quirky imagination, as well as fluid jersey dresses that change shape and color depending on the wrapping. “It’s about contrasts: femininity and masculinity, alternate shapes and the clash of fabrics,” he said.

Pené said of his new business partner: “We know what Jean Paul Gaultier is capable of doing. He has nothing to prove. Everyone remembers his shows from the Eighties and Nineties. He made the most beautiful blue blazers I’ve ever seen. He combines creativity with consistency. People [will] be amazed.”

The designer acknowledged that his rtw business trails that of other couture houses like Chanel, Dior, Valentino and Givenchy. “At the end of the day you have to ask yourself: Why am I doing this? And I say I want to touch more people with my clothes. So it’s good to sell more — because I’m still not bad at designing clothes, no?” he asks with a chuckle.

Gaultier lists China, India and Russia as his target markets. “But let’s not forget America — this will be our next chapter.”

The 60-year-old Gaultier launched into couture in 1997, though his fragrance business — headlined by the women’s Classique scent and Le Mâle for men — remains the biggest and most successful part of the business, and a key attraction for Puig, the Barcelona-based fashion and fragrance firm that purchased the 45 percent of Gaultier held by Hermès International and roughly 15 percent from the designer.

The transaction gave Gaultier a new lease on life and transformed Puig — parent of Nina Ricci, Carolina Herrera and Paco Rabanne — into a bigger and more formidable player on the international fashion scene.

Come mid-2016, Puig will get its hands on Gaultier’s lucrative fragrance license, currently held by Beauté Prestige International, a subsidiary of Japan’s Shiseido. Sources estimate that fragrances represent more than 80 percent of the Gaultier business, if one considers the wholesale value of all products.

Prior to Puig’s arrival, the Gaultier business saw a succession of managers, with the designer himself taking on the title of president following the 2010 exit of perfume executive Véronique Gautier, who left to become international general manager of Giorgio Armani Parfums. (Prior to Gaultier, she had been ceo of Hermès Parfums.)

The maker of Birkin bags and silk scarves was seen as an unusual partner for the madcap designer, famous for his irreverent approach to fashion and such outré inventions as skirts for men and Madonna’s now-iconic cone bustiers for her “Blond Ambition” tour.

Gaultier’s business has long been based on licensing, including deals with Italy’s Fuzzi for knits and beachwear. According to market sources, the company generates revenues of about 30 million euros, or $39.2 million at average exchange rates.

Gaultier admits his prime desire today is to change. He plans to present his rtw collections in a new venue, though he would not reveal where exactly. He also wishes to delegate more in the future — “little by little, because I get older. The reason I haven’t done it yet is because I started alone, with no assistant — like the couturier in ‘Falbalas,’ the movie, you know?”

Although he says he began designing immediately after seeing that 1945 Jacques Becker film, it’s hard to imagine the designer losing his grip on reality like his fictional soulmate, a Parisian couturier obsessed with his model, who eventually jumps out the window. Rather, Gaultier has trouble slackening the reins. “In a way, designing is like my baby. I want to take care of it myself,” he admitted.

And he’s already plotting ahead for next season. “[Since] it’s all in the stars, the next collection will be about the horoscope,” he forecasts with a hearty laugh, his unquenchable joie de vivre permeating the grand, high-ceilinged atelier he occupies in the Arts et Métiers quarter here.