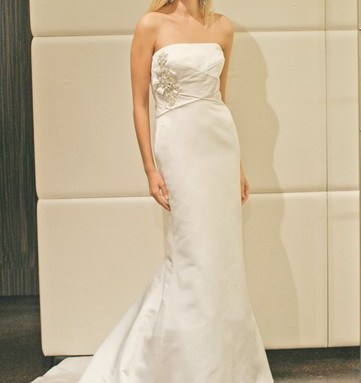 NEW YORK — With brides-to-be pinching pennies, Mark Badgley and James Mischka are launching a secondary, more affordable bridal collection this spring. The designers also are considering other business-building tactics, such as a men’s wear line.

During a preview Wednesday of the new Mark and James bridal label in their showroom here, the designers said they want to entice women who don’t have bundles of money to spend but still want to look glamorous, as well as women who are forgoing a wedding gown splurge to stretch their budget for a destination wedding.

“Obviously, with the recession, everything has slowed down to a certain degree,” Badgley said. “We definitely know that we need to broaden our reach.”

Made in the same factories as Badgley Mischka’s signature bridal line, Mark and James features special touches such as a train with lattice work, chiffon ruffles and intricate beading. One of the gowns is reminiscent of a style worn by Tyra Banks when she escorted the designers to the Costume Institute gala at The Metropolitan Museum of Art last May.

Aside from appealing to price-conscious brides-to-be, Mark and James is geared for post-recession shoppers, too. “Things won’t go back to like they were before,” Mischka said. “Everything won’t be so over-the-top and go-go. People who lost their money aren’t getting it back as quickly as it took to lose it.”

However, Badgley noted that 21 Badgley Mischka gowns, mostly in the $9,000 range, sold recently at trunk show at Kleinfeld in Manhattan. “We were ecstatic,” he said.

As for jumping into men’s wear, Mischka said, “We’re starting to have serious conversations with several people. We know not to put all our eggs in one basket.”