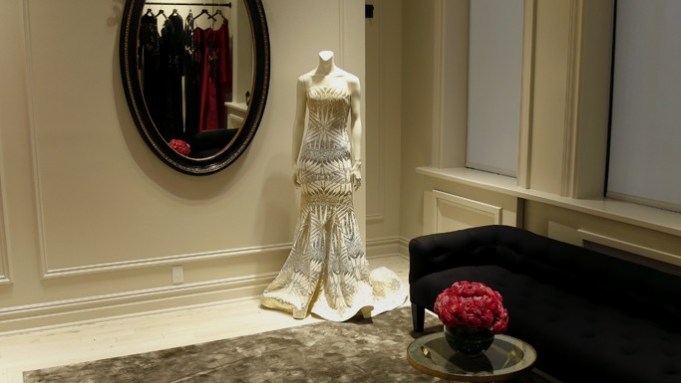 Located in a landmarked building at 24 East 64th Street, the 3,500-square-foot town house is a study in relaxed elegance with room for all of their collections — ready-to-wear, couture, bridal, costume jewelry, fine jewelry, sunglasses, shoes and handbags — spread out over three floors. The designers, who have been partners for 28 years and married earlier this year, said they wanted the store to have a residential feel. “Funny enough, this is kind of what our two homes look like,” said Badgley. “No matter what we try to do, everything always looks the same. But we like that.”

Badgley described the renovation of the space, which is owned by the Pucci family and had at one point been home to a Pucci boutique, as “a gut job.” When they found it, “it was very Seventies, with mirrored walls and no moldings and sub floors,” said Mischka. Working with architect Patrick Gerard Carmody, the designers transformed the store into an open, light-filled space with light hardwood floors made from reclaimed wood from barns in Kentucky and Tennessee.

The front rooms feature the label’s sportswear division, evening gowns and cocktail dresses. Then there’s the reception room with a wall of accessories that’s accented with carved wood sculptures found at a Bel Air estate sale. Furnishings are minimal, mostly black, marble and gold from John Derian with a few antiques, such as an oversize Austrian mirror in the back room, which is devoted to their couture and red-carpet collections. Downstairs is the bridal suite overlooking a garden, which the designers have plans for. “Everything’s a work in progress,” said Badgley. “There’s a sweet little garden back here that’s not pretty yet but it has potential. And we’re going to make the bridal dressing room really lush and relaxing so she can just hang out in here.”

The designers also took an apartment above the store to dedicate to VIP fittings. It’s still under renovation but will be ready for the grand opening on Sept. 10.

“We’ve been dying to have a New York store,” said Badgley.

“We looked for years to find the right location,” said Mischka. “We would see these storefronts on Madison that are just like a box and not interesting to us. This is interesting because it has a lot of nooks and crannies. You can make each room feel special.” Originally, the idea was to open in New York first, but the flagship came first in Los Angeles in 2011, where they had previously had a boutique that opened in 2000, when the brand was part of Escada. Badgley Mischka was bought by Iconix Brand Group Inc. in 2004. The label also has 18 stores in China and plans to have 30 by the end of this year. Asked if the New York store was part of a domestic retail growth push, Badgley said “in a small way, in the right markets.” They have plans to open in Houston next and possibly Bal Harbour, Fla., “but our product is lifestyle, but it’s a certain customer,” said Badgley. “It doesn’t work everywhere. We’ve got to find the right towns, the right cities.”