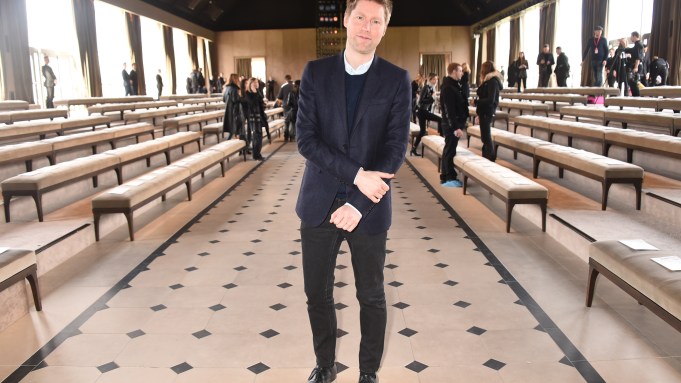 LONDON — It’s the morning after the runway show meant to herald a new era for Burberry, and Christopher Bailey is looking to the future — his and the brand’s.

In a wide-ranging interview with WWD, Burberry’s chief creative and chief executive officer said he’s looking forward to the arrival of Marco Gobbetti, who will succeed him as ceo next year; revealed his ambivalence about the joint management role he’s held until now, and reiterated his commitment to fast — and slow — fashion.

Bailey was spending the day at Makers House — the space in Soho that Burberry has temporarily transformed into a runway venue, showroom and artisans’ hub — meeting retailers and customers, who, as of Monday night, were able to shop the 83 looks and more than 250 pieces from the September 2016 ready-to-wear collection.

Those looks were displayed on mannequins, with walk-in customers able to buy them via iPads, while a host of craftspeople were busy doing patchwork, passementerie, stitching and embroidering as part of a display on the ground floor meant to underscore Burberry’s passion for the hand.

Bailey himself is eager to get back to the business of creating — full-time. He admitted his dual managerial role is an unconventional one, and that he misses having a partner in crime.

Bailey, who had worked alongside former ceos Rose Marie Bravo and Angela Ahrendts, added that role in 2014 following Ahrendts’ departure, just as luxury sales began to slow and Hong Kong, which had long delivered the fattest margins in the luxury business, started its decline.

The financial world was always critical of the double role; Burberry’s share price suffered, and the company has recently set a wide-ranging restructuring plan, including the appointment of Gobbetti as Bailey’s successor. As of next year, Bailey’s new title will be president and chief creative officer and both he and Gobbetti, currently ceo of Céline, will report to the company’s chairman, Sir John Peace.

“I am a designer by birth, a creative person, and I want to make sure that I have the time to be able to do that properly,” said Bailey following a Facebook Live interview with WWD.

“I’m quite entrepreneurial as a spirit, I’m excited by many different worlds, and while I don’t feel intimidated by these different worlds, I don’t want to spend all my time in finance meetings — it’s not the best use of my time. We can’t do everything, we are still human beings. I’ve tried to look at myself and say, ‘Where am I adding value in the company?’ ‘Where do we as individuals add the most value?’”

He is looking forward to Gobbetti’s arrival. “He lives in stores and he understands retail, operations and customers. He understands the cogs, the finances, the machine of running a global organization.”

Bailey joined the company in 2001 when Bravo was ceo and was promoted to chief creative officer under Ahrendts, working with both women to help transform Burberry from a purveyor of heritage trenches and scarves into a megafashion and luxury brand.

He acknowledged that his dual role is “completely unconventional, but I don’t think anything is forever. I believe in testing new things, in putting oneself out of one’s comfort zone. Contrary, possibly, to what some people believe, I had no aspiration to be a ceo because titles have never meant anything. What I care about is leading our organization, whatever title one has to put onto that. As a public company that has to be a ceo title.”

Bailey admitted that he missed having a partner and a sounding board.

“I have always had somebody right next to me — and we divide and conquer. I miss that, I like having a partner in crime, I like working with somebody, and so I’m looking forward to Marco joining. I love working with teams. I’m a designer, I like that interaction, I like the sharing of ideas and debate, and seeing the bigger picture and getting outside our little bubble. So I hope that’s what Marco will bring.”

He said he envisions his working relationship with Gobbetti to be similar to those he had with Bravo and Ahrendts.

“All relationships, just by their nature, are unique. Marco brings different experiences with him and I have had different experiences” since joining Burberry. “My relationship with Marco will be, I hope and expect, a true partnership and collaboration, and not dissimilar to those [previous ones]. It’s not about walls anymore, it’s about how can we be in sync with each other.”

Asked what he learned from his two-and-a-half years as ceo, Bailey said it’s natural for a designer to help carve out the company’s vision and future, “but I learnt that [in the financial] world you have to be incredibly scripted because you are dealing usually with facts and with global markets.

“In the creative world you are dealing with nuance and emotion, so I had to kind of put myself in different boxes. As a character I am more nuanced than scripted and I feel more myself” in a creative environment, he said.

Bailey also talked about future developments at the brand. The new app — meant to make shopping faster and easier — hasn’t launched yet, but he said it’s in its final development stages.

“The consumer and audience are changing much faster than big organizations,” so companies have to be very choosy about designing and building new technology.

His words are testament to how much the digitally savvy consumer is now setting the agenda. Burberry has long been the most tech-minded luxury brand, the first to live-stream its shows, embrace social media platforms worldwide, sell items straight from the runway and dive into e-commerce — it was one of the first labels to ink a deal with the nascent Net-a-porter.com.

Only recently have competing brands such as Chanel, Prada, Louis Vuitton and Céline begun to dip their toes into e-commerce, preferring to control their retail environment via bricks-and-mortar stores.

“The umbrella concept is to make sure that things are instinctive, that we are connecting all the dots whether you are in a store, online, on a mobile device or desktop. To make sure things become personal. This is no radical thought, but I do believe the future is about making everything more personal,” Bailey said.

“We will, I expect, make every online experience created just for you. And by the way, I’m not talking about today or tomorrow. It’s the idea of things being more personal and relevant to the individual rather than for everybody.”

Bailey takes pains to stress that technology is only one part of the story, and that craftsmanship is the other, hence the partnership with The New Craftsmen — the lifestyle concept store in London that sells handmade goods — for the show. A program of themed events — theatrical readings, sculpting, sand casting and silk-screen printing — will run until Sept. 27 at Makers House.

Bailey acknowledged this, but argued it was Burberry’s moment to join the conversation.

“We don’t pretend that what we are doing in terms of craft is unique to Burberry — it is absolutely not,” said Bailey, who tapped the Victoria & Albert Museum for help with prints and printing techniques for the latest collection.

“It is something I think that Burberry, as a company, has sometimes taken for granted — we do it, but we don’t talk about it. It is becoming more important to a customer to understand that it’s an instant world they live in, but that these processes do take a long time — like the tassels on the capes — and beautiful skills are used to create them. Although we’re communicating in a very contemporary way, the creativity, skills, craftsmanship and artisanal quality doesn’t — and shouldn’t — change.”

Bailey admitted he and his team will be casting a cold eye on the latest runway show and the see-now-buy-now in-season strategy — and looking for ways to improve.

“We need to get through this week and then I’ll sit with the teams and see what works, what doesn’t work. We’re going to look at things in a very pragmatic way, and say, ‘This was a bit chaotic, but actually that was successful and really resonated.’

“It’s a 360-degree approach we’ve had to take, working with the mills that weave the fabric, to the supply chain, warehousing and shipping, to our stores and stockrooms, to how we train our teams in the stores, and uploading all the coding online. It is a really complex discussion, and all the dots need to be joined,” he said. “We don’t have all the answers and we’re working through this.”