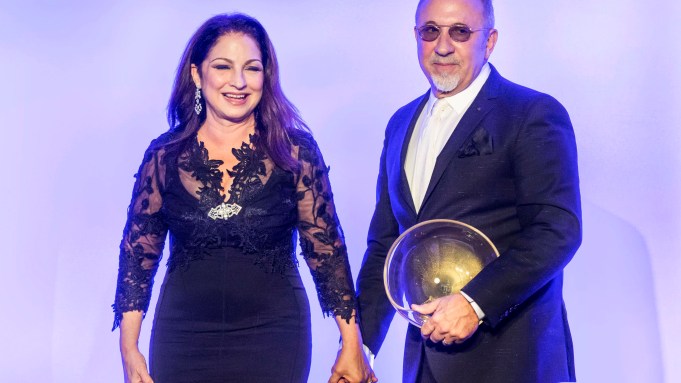 It’s the Buoniconti Fund to Cure Paralysis’ largest event supporting the Miami Project to Cure Paralysis. It’s also where designer retailers and upscale brands that normally fiercely compete against each other, especially on a Saturday night in peak season in Florida, demonstrate a cooperative spirit by closing down their stores so Bal Harbour Shops can stage the big event.

Destination Fashion is held every few years because, according to the organizers, it’s too ambitious to pull off annually. At Saturday’s event, Savannah Guthrie served as emcee, Pitbull was the consummate Cuban closer, and there was a red-carpet parade of athletes and music and film celebs including Phil Collins, Christian Slater, Wayne Newton, Barry Gibb, Jack Nicklaus and Gloria and Emilio Estefan, among the 2,500 attendees. This time around, the gala received two individual donations for $1 million and $500,000 before dessert, among other generous donations, but organizers did not provide a figure on how much the evening raised in total.

“I wish I could just sit in a corner with a glass of wine and watch all these gorgeous women. Miami sure knows how to go out for the night,” said Guthrie, who wore a fringed dress from Jason Wu and bedazzled medical boot due to a sprained angle. “Note the singular shoe is by Manolo Blahnik.”

During a seated dinner amid the palm trees, Brunello Cucinelli presented its full spring collection in a fashion show with 40 models held in conjunction with Neiman Marcus, which anchors the center along with Saks Fifth Avenue. It was the Italian brand’s first fashion show in Florida, and the abundance of metallic leather, sparkly embellishments from pinstripes and sporty sandals blended well with a crowd that sported its fair share of glitz.

“More than being about fashion though, we look to be part of something bigger in communities and have been impressed by the Buoniconti Fund and how all these people just want to help,” said Massimo Caronna, U.S. president for Brunello Cucinelli, among the party of eight representing the brand. Though Cucinelli himself couldn’t make the gala, “Brunello was very touched to participate and sees the immense importance of this mission. Being active — he plays soccer about three times a week and skis — is a major part of his life.”

The Whitman family, all three generations, were front and center. Stanley Whitman founded the open-air center 50 years ago, and the family still owns and manages it. It’s among the most productive shopping centers in the world and the Whitmans have been major supporters of the Miami Project since 2004. “We’re grateful to the 100-plus stores and restaurants who graciously volunteered to support the cause,” said Matthew Whitman Lazenby, president and chief executive officer for Whitman Family Development, and Stanley’s grandson. Matthew also serves on the Buoniconti Fund’s board.

Nick Buoniconti, the legendary football star who played for the Miami Dolphins, explained how far the Miami Project to Cure Paralysis has come over the years. “We’ve gone from a tiny space without a scientific director to 150,000 square feet with 200 scientists and technicians, but my son, Marc, who was paralyzed at 19 years old and is now 49, is running out of time,” Buoniconti said. Marc suffered a spinal cord injury on the football field making a tackle while playing for The Citadel.