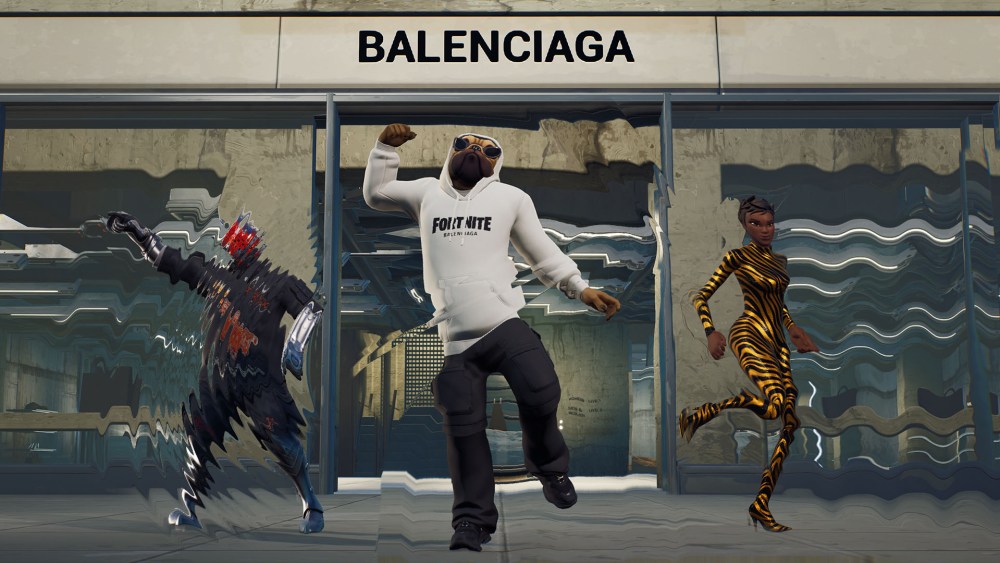 Balenciaga has entered the game, again.

The luxury fashion house owned by Kering and Epic Games’ Fortnite have teamed on a new fashion partnership that launches today IRL and within the Fortnite universe.

Blurring the lines between the physical and digital worlds, the partners revealed on Monday a futuristic city, Strange Times Featured Hub, inspired by Balenciaga’s “Afterworld: The Age of Tomorrow” environment for the brand’s fall 2021 collection. In Strange Times, players can enter virtual stores, including a Balenciaga location, for activities and to buy outfits, or skins, to wear in game. The skins change based on the dynamics in the game.

The two companies are taking their collaboration a step farther by launching a capsule collection based on past Balenciaga collections, specifically the fall and spring 2021 and spring 2020 collections. But the outfits won’t only live in-game — Balenciaga and Fortnite on Tuesday will launch the in-game pieces as real-life pieces for sale in select Balenciaga stores and online.

The Fortnite team replicated Balenciaga apparel through 3D scans to create prototype models. First, the artist produced a concept and a 3D proto-model as a guide. The proto-model was sent to a technical artist who approved the model’s functionality and polished the rough prototype in ZBrush.

Finally, the team created a lower polygon model to be used in Fortnite and used Substance Painter to paint the Balenciaga styles on the model. The clothes are also modeled on characters such as Ramirez, Knight, Banshee, and finally Doggo, who sports a collaboration hoodie and Triple S sneakers produced by CAD data provided using Balenciaga.

Epic used its Unreal Engine technology to create a 3D billboard that features Doggo in the partnership collection and will be on view in cities such as New York City, London, Seoul and Tokyo, to name a few.

In addition, the new Strange Times environment hub will update throughout the week with new images made by the players.

“Our partnership with Epic didn’t start with Fortnite, actually,” Balenciaga artistic director Demna Gvasalia said in a statement. “It started with our own first video game, Afterworld, which we built using Unreal Engine to debut our fall 2021 collection. From there, we have continued to be inspired by the creativity of Unreal and Fortnite communities. It made total sense, to me, that we collaborate further by creating these authentic Balenciaga looks for Fortnite and a new physical Fortnite clothing series for our stores.”

“I really do feel like this partnership is disrupting the fashion industry and how campaigns are built,” said Epic Games president Adam Sussman. “We’ve made forays into sports, music, entertainment — Balenciaga was the natural choice for us to do something in fashion we hadn’t done before.”

Epic Games and Balenciaga had a preexisting relationship as the latter used the Unreal Engine for their fall 2021 campaign.

Prior to the campaign, Fortnite creator Lachlan hosted an in-game fashion show where fellow gamers could participate and show off their looks for a chance to win a prize. “Once we saw that success, we thought how we can bring fashion into Fortnite in a meaningful way,” Sussman said.

Epic has found ways to include other mediums like music and entertainment into the game through concerts featuring rapper Travis Scott and singer Ariana Grande, as well as making Marvel and DC Comics characters playable in game and even LeBron James, who was introduced to the Fortnite universe to help promote the film “Space Jam 2.” Ferrari also debuted its 296 GTB sports car in game through time trials and special races.

“When we think about the future of where this could go, we’re excited about how our tech can push boundaries,” said Emily Levy, Epic Games senior manager of partnerships. “We’re just getting started with the virtual.”

Unlike the Travis Scott and Ariana Grande concerts and other Fortnite events, the new Strange Times hub will remain in game for some time.

Sussman said this collaboration in particular is something the Fortnite community wants given how they created their own fashion experiences independently. He also believes that “Fortnite is fashion,” a place for self-expression and much more than just a game.

“We’re a social destination,” he said. “We’re intentional about staying at the forefront of culture, figuring out ways to authentically partner with fashion, sports, music, entertainment is incredibly important to us. You see what cadence we’re on and we’re committed to continuing that pace in the future. What we don’t want to ever do is do the same thing again. We want to push the envelope on what we can do.”