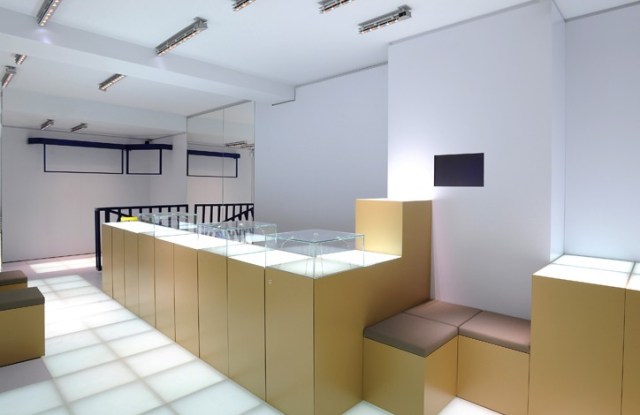 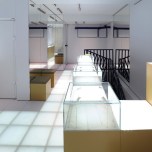 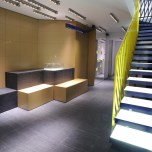 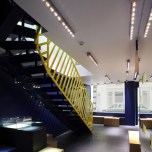 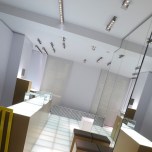 PARIS — Balenciaga this week unveils its first freestanding men’s boutique, a 650-square-foot unit on the Left Bank here with a graphic and otherworldly decor meant to evoke a submarine.

This story first appeared in the June 22, 2010 issue of WWD. Subscribe Today.

Designer Nicolas Ghesquière once again collaborated with French artist Dominique-Gonzalez Foerster on the unit, an illuminated gangwaylike staircase leading shoppers up to a showcase for ready-to-wear, leather goods, shoes, sunglasses and jewelry.

“It’s definitely a concept made for men. It’s not a masculinization of the women’s concept,” said Isabelle Guichot, Balenciaga’s chief executive officer.

Diode lighting, cube-shaped display units and a sliding metallic door on the fitting room all reinforce a high-tech, scientific ambience. The windows, always enigmatic chez Balenciaga, feature a curtain of perforated metal and a glimpse of the staircase and its vivid banister.

Balenciaga men’s wear is available in about 150 points of sale worldwide, most of them multibrand boutiques. The four dedicated corners are at Hankyu in Osaka, Seibu Shibuya in Tokyo, Harvey Nichols in London and Printemps in Paris.

Ghesquière, who catapulted Balenciaga with his experimental and futuristic approach to women’s wear, extended his creative purview to men’s in 2004, taking a wardrobe approach and slowly layering on other categories.

“The only category we haven’t touched so far for men is fragrance,” she noted, describing it as a “future” project.

Balenciaga men’s wear is showcased in several of its larger boutiques, namely Milan, New York, Los Angeles and Shanghai. The historic Paris flagship at 10 Avenue George V previously carried some men’s wear; however, the unit is currently undergoing a two-step renovation. A new store design, dedicated only to women’s categories, will be unveiled in September, Guichot noted, adding that forthcoming boutiques in Beijing and Las Vegas CityCenter will also feature dedicated men’s departments.

Located at 5 rue de Varenne, the Balenciaga men’s boutique arrives amidst a flurry of new designer addresses on the Left Bank, which range from Polo Ralph Lauren’s mega flagship on Boulevard Saint Germain to a new APC unit next door.

Guichot allowed the Balenciaga men’s store is a “destination,” albeit steps away from a concentration of high-end shops — from Le Bon Marche, which is expanding its men’s department this fall, to banners such as Paul Smith, Arnys and, coming soon, Hermès.

While Ghesquière has showcased a few men’s looks on the runway in 2008, he’s mostly taken a low-key approach, dressing certain French cinema figures for red-carpet moments —­ including Romain Duris, Tahar Rahim, Yvan Attal and Roschdy Zem — and presenting new collections by appointment in the firm’s showrooms here, with the spring range to be unveiled later this week.