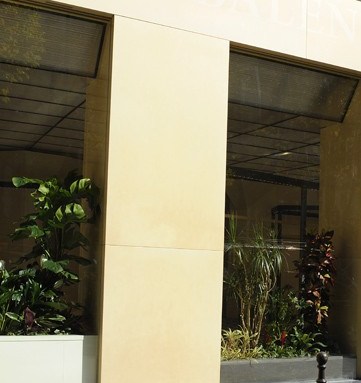 It’s an apt metaphor for a new design concept that fuses the heritage of late founder Cristóbal Balenciaga with the futuristic vision of the house’s current steward, Nicolas Ghesquière.

“Back to the future,” said Isabelle Guichot, chief executive officer of Balenciaga, as she led a tour of the boutique at 10 Avenue George V, where the Spanish founder first set up his couture house in 1937.

Indeed, Ghesquière and Dominique Gonzalez-Foerster, the contemporary artist with whom he collaborates on store design managed to marry original, classical elements such as black-and-white French chateau floors — and an ornate banister retrieved from the Balenciaga archives — with Starship Enterprise-worthy lighting and fractal fixtures reminiscent of the Fortress of Solitude in “Superman.”

The 1,940-square-foot boutique, slated to open Saturday, was also slightly refigured to claim additional ground-level space for selling, allowing Guichot to increase ready-to-wear stockkeeping units by 50 percent, and to better showcase a range of product categories, from footwear and sunglasses to fragrances. There’s even trolley-style luggage, tucked between two gold chairs and next to an interplanetary mural.

Guichot said she expects a bump in sales productivity, but declined to give sales projections for the unit, considered in the top-five Balenciaga locations worldwide.

The new design, however, allows shoppers to “feel it’s a historic place for the brand, while at the same time, you see the modernity,” Guichot said.

Striking design elements include a soaring, silvery grotto for perfumes, miniature robotlike spotlights lording over small leather goods and colorful, live plants that heighten an otherworldly atmosphere. Ghesquière and Gonzalez-Foerster also played with the stone flooring, melding it with a low-pile carpet version and another in luminous, pale pink resin.

The two-part store — which has one entrance for accessories and another for rtw — is completely dedicated to Balenciaga’s women’s universe. It previously carried selections of the men’s collection, which, as of June, has its own freestanding retail showcase on Rue de Varenne on the Left Bank.

Balenciaga continues to expand its directly owned store network, with twin Beijing locations and a Hong Kong unit slated to open before the end of the year, Guichot noted.